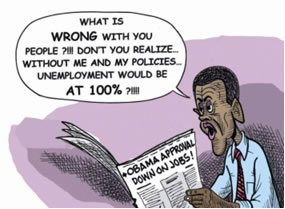 Following the announcement of this week’s devastating jobs report, the stock market plunged over 120 points in minutes. But Obama said, “This is a step in the right direction.” If he thinks this jobs report was good news, what would he consider bad? Perhaps his people are telling him to expect 10% unemployment, and he is preparing us to believe that 8.2% (the current rate) is good by comparison.

Mitt Romney, who is quite a bit more savvy than Obama on economic matters, called the jobs report, “A kick in the gut for middle class Americans.” A political response, to be sure - but nonetheless true.

Remember the famous Obama interview at the beginning of his administration when he promised to bring unemployment down to 5.6%? He said, “I will be held accountable. I’ve got four years…If I don’t have this done in three years, then there’s going to be a one-term proposition.” (To see him say this on VIDEO, see link at end.)

He said that if unemployment remained above 8% he should not be reelected. It has been above 8% every month for the past 41 months. He should keep his word and not run at all. But, as he told one donor when he was called upon to keep a campaign promise, “You should know better than to believe a politician’s promise.”

Why is it important that the private sector gained only 84,000 jobs last month? For two reasons. First, because it takes at least 125,000 jobs gained (some economists say 150,000) just to keep up with inflation. Anything less than that and we have a net LOSS of jobs. So when Obama says a gain of 84,000 is good, he’s either a liar or stupid. Either way, he should not be in the Oval Office.

The second reason is that it takes 250,000 to 300,000 (depending on which economist you listen to) new jobs each month to help create any meaningful growth in the economy. The economy continues to contract, and Obama doesn’t want to talk about it. So he changes the subject to how ObamaCare is supposedly going to help the economy. He’s in deep trouble, there, too, since over 2/3 of Americans believe correctly that it will further damage the economy.

Here’s the big problem for the Obfuscator-in-Chief: Everyone in his base has been hurt by his job-killing policies. What are the main groups that helped him get elected last time? Blacks, Hispanics, women, our youth and the unions. Let’s see how they have fared under an Obama presidency.

Black unemployment has risen dramatically under Obama. It now stands at 14.4%, almost 50% than the general population. Young blacks are even more devastated; unemployment in that demographic is almost 40%. Add to that the fact that Obama’s views on homosexual marriage and abortion are the exact opposite of those of the great majority of blacks, and you have to wonder: Why would any African American vote for this failed president in November?

Obama seems to think he has the Latino vote sewed up. But their unemployment rate is above 11% (34% higher than the general population), and their views on abortion and homosexual marriage mirror those of blacks. These two groups are much more conservative morally than the general population. Obama thinks that by refusing to enforce federal immigration laws (and thereby adding one million illegal immigrants to an already distressed job market) he will endear himself to Hispanics. But every person of Latin heritage that I know (including my wife, who was born in Cuba) believes that no one should be allowed to enter this country illegally and take jobs from Americans.

What about women, who swooned in large numbers whenever the charismatic Obama gave a campaign speech four years ago? There are three quarters of a million more women unemployed today than when Obama took office. And they’re not happy about that.

Young people who had never voted before registered and voted for Obama in record numbers in 2008. But they, too, have been disappointed by his promises of “Hope and Change.” They have come to realize that he is an empty suit who made promises he knew he couldn’t keep -  just like most politicians. Unemployment among youths aged 16 to 24 is 16.4% - exactly DOUBLE the rate general rate of 8.2%. And the number of college graduates who are able to find jobs has dropped by 406,000. According to the Associated Press, “One in Two College Graduates are Jobless or Underemployed.” (See LINK to article below.)

Finally, union workers not only voted for Obama – they knocked on doors, gave him millions of dollars that were forcibly taken from members who didn’t support Obama, and in some cases intimidated Conservative voters. Yet they have fared worse under Obama than any group except blacks. Unemployment among construction workers has been above 20% for much of Obama’s reign; currently it is at 12.8%. Union membership has dropped dramatically (as much as 50% in some unions) as workers have rebelled against compulsory union dues being used to support policies and politicians they can’t stand. As a result, Obama will have far fewer foot soldiers and far less union money in this election.

The big question is why would any African American, Hispanic, woman, young person or union worker vote for a man who has broken all his promises? With each of these groups far worse off than they were four years ago, why would they even consider voting for this charlatan? Unfortunately, many of them are politically unsophisticated. They will vote Democrat because their daddy and their grandma voted Democrat. UNLESS we talk to them. I know of hundreds of incidents in which Conservatives have engaged in calm, reasoned conversations with Liberals and convinced them to change the way they vote.

For instance, when Al Gore was running for president, two of the men in my church were working with a black Democrat on a construction crew. He indicated that he planned to vote for Gore. Knowing that he was a Christian, they asked him, “Did you know that Al Gore believes that homosexuals should be allowed to marry one another? Did you know that he believes that women should be allowed to have abortions when they failed to use birth control, even when rape or incest are not involved?” He replied, “I didn’t know about those things. I will never vote for that man.” A five minute conversation changed the way one man voted.

Historically job growth in the first half of an election year has had a huge impact on the results of the election. The last incumbent president who was reelected with an unemployment rate above 7% was FDR. Like Obama, he was a smooth talker who managed to convince people that all the mistakes he made were someone else’s fault, and America was dumb enough to give him another four years in which to devastate our economy. But he had an advantage that Obama doesn’t have. He had just stolen 40% of the wealth of individuals Americans, and he used our own money to buy votes to ensure his reelection. (To understand FDR’s crime better, read, “How the Government has Guaranteed that Gold Will Double.” See LINK below.)

It could be argued that Obama is using our money in his campaign just as FDR did. That is true. In June he did an average of one fund-raiser each day, all at our cost. He recently used Air Force One (which costs us $200,000 per hour to operate) to do a campaign conference call with big supporters. The big difference between Obama and FDR is that the campaign finance laws are different today, and Obama has to be careful about how he misappropriates our money. As a result, an alarmed Obama complained to the fat cat donors on that call that this could be the first time in history a sitting president was out-spent by his opponent.

That’s right – Romney has raised far more money than Obama in the last few months. In fact, he got $4 Million in donations (the average size of which was $98) in the 24 hours after the Supreme Court decided by the thinnest of margins that ObamaTax (The ObamaCare law that the Justices determined was a tax, not a penalty) was constitutional.

Obama has never taken responsibility for any of the mistakes he has made. He told us that if we spent almost $1 Trillion on his “stimulus package,” driving us even deeper into debt as a nation, it would fix unemployment. Even if we believe his bogus claims of the number of jobs created, according to the Congressional Budget Office each one cost us between $228,000 and $586,000. The average cost of a job created by the private sector is just over $22,000.

Instead of being a man about it and admitting he was wrong he has blamed:

(To see the actual dates and places where he made these outrageous, self-serving statements, see the LINK “Obama’s Blame Game” below.)

There is no question that Obama inherited a weak economy. But after almost four years, it is no longer “Bush’s economy.” He needs to man up and admit that now this is the “Obama economy.”

Isn’t it time we elected a real man to the White House? We need someone who knows what to do to fix unemployment and the general economy, and who will take responsibility for his own actions. That man is Mitt Romney.

CAUGHT ON VIDEO: Obama Promises to Bring Unemployment Down in Three Years
http://www.youtube.com/watch?v=CCN5-ovvFL0&feature=player_embedded

“How the Government has Guaranteed that Gold Will Double.”
http://www.conservativetruth.org/article.php?id=1763

AP Article: “One in Two College Graduates Are Jobless or Underemployed.”
http://www.huffingtonpost.com/2012/04/22/job-market-college-graduates_n_1443738.html