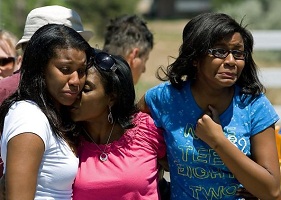 As tragic as the Aurora, Colorado shootings was, Obama campaign staffers are overjoyed by the opportunity it presents. As Obama’s friend and former Chief of Staff once said, “Never let a good crisis go to waste.” Watch carefully over the next few weeks and months as Obama cynically manipulates this disaster to get votes.

For more than a year I have expected two things to take place. I predicted that Obama would enact some kind of amnesty for illegal aliens; and that he would use the federal government to prevent state election officials from enforcing election laws that keep illegals from voting. Both of these things have happened. Obama obviously believes that all the illegals will vote for him.

The second prediction was that Obama will start a war shortly before the election, hoping that a “Don’t change horses in the middle of war” argument will work. I hope this doesn’t happen, and if it does, I hope Americans will see through his appalling plan. But I believe it is very likely that he will start some sort of conflict, probably against Iran.

Obviously I did not see this coming, but it is a gift that Obama will undoubtedly milk for all it is worth.

The timing of the Colorado shooting is very interesting. The United Nations is about to vote on an international ban of civilian possession and use of all small arms, and the Obama Administration has indicated that the US will support it. Never mind that the majority of Americans would never support it. If Obama signs on, as he is expected to, we are all in trouble.

This is also the first anniversary of the Norway terrorist attacks. Even though the deaths there were caused by both guns and a bomb, anti-Second Amendment activists use the Norway attacks as a rationale for preventing citizens from owning guns for personal defense or hunting.

The irony of using the Norway attacks in this way is that Norway has extremely strict gun laws. No one (not even police officers) can own a personal weapon without a permit from the government. Permits are sometimes given for sport shooting and for hunting. Technically a citizen can apply for a gun permit for self-defense purposes (although these are almost never approved). But even these stringent these laws did not prevent the terrorist attacks; nor could they.

New York City Mayor Michael Bloomberg is known for shooting off his mouth before he gets the facts. He certainly did so regarding the Times Square bombing. In that case he stupidly jumped to the conclusion that the bomber was someone who didn’t like ObamaCare. He should try using the advice, “Engage brain, then speak.”

He did the same with the Aurora shooting. In an anti-gun rant, he told reporters, “No other developed country in the world has remotely the problem we have with these kinds of shootings.”

Bloomberg, like most Liberals (I know he calls himself a Republican, but he is a Liberal), doesn’t understand that there is no connection between gun laws and the prevention of massacres such as the one in Aurora. Germany has total control of guns. Yet two of the three worst mass shootings happened on German soil.

England is a tiny island nation where it is easy to control gun ownership. They have the most draconian gun laws in the world. Even police officers (with very few exceptions) are not allowed to carry guns on duty! Yet two years ago in England a man named Derrick Bird killed more people than were killed in Aurora – with a gun.

Any crazy person or terrorist who is determined to kill people will find a way, whether it is a bomb as in Madrid, nerve gas as in Tokyo, or an airplane as on 9-11. At least if they use a gun we have a chance to take them out. With a bomb or gas the damage is done and dozens or hundreds are dead before anyone knows there is a problem.

And it is much easier to build a bomb than to buy a gun. The Oklahoma City bombing, which killed 168 (including 19 children under the age of six) was done with a rental truck, some fertilizer, and other easily obtainable products that I won’t mention. I didn’t see any ignorant politicians calling for a ban on fertilizer following that tragedy. But in the past few days we have seen dozens of opportunistic Liberals try to use the Aurora massacre to further their political agendas.

The theater chain where the shooting took place doesn’t allow anyone, even if they have a permit, to carry a gun. Of course that didn’t stop the gunman. As the saying goes, “When guns are outlawed, only the outlaws will have guns.” If even one citizen had been allowed to carry a gun into that theater, there would not have been 70 people shot, twelve of them fatally. The shooter might have been able to get off a few rounds, but then he would have been stopped.

Do you remember the shooting at the Appalachian School of Law in 2002? Of course you don’t, because only three people were killed. Because so many were killed in Aurora, the media will be talking about it for years. They should be talking about the law school. Why? Because two armed students stopped the shooter there before he could kill anyone else.

I could cite dozens of examples of alert, self-reliant citizens who stopped crimes in progress with the use of legal concealed weapons. Recently in Florida a senior citizen pulled his gun on two armed robbers and they ran from the scene. Armed citizens have prevented massacres in churches.

But there are dozens of examples of the opposite. One of the best known is what I call “The Preventable Massacre.” In 2009 we saw the absurdity of trained soldiers at Fort Hood, Texas, not being allowed to carry the weapons they are trained to use on the base. This allowed a Muslim terrorist who happened to also be an Army major to murder 13 people and wound 32 others. He wasn’t allowed to carry a weapon on the base, either – but he was a terrorist, and terrorists don’t obey the rules.

If even one soldier had had his weapon with him that day, Nidal Malik Hasan might have shot one or two people. But he would have been put down like the dog he was before he shot 45 people. Instead he leisurely murdered and maimed dozens while CIVILIAN cops responded and lives were lost. Two soldiers were killed trying to stop Hasan, because their only weapons were a chair and a folding table. This is pure insanity.

If even one armed citizen had been on each of the airplanes used for the 9-11 attacks, the 3,000 Americans who died that day could have been saved. There have been almost 600 deadly force incidents in churches in the last 13 years, during which over 300 people have died. If these churches had had armed security (or armed parishioners), most of those people would have lived. In the dozens of school shootings we have seen in the past decade, if even one teacher or principal had been armed, hundreds of lives could have been saved.

“Why not just ban all guns?” some may ask. Aside from the many other ways to commit mass murder that would still exist, banning guns just doesn’t work. Historically total gun bans have been followed by totalitarian governments because citizens were not able to defend themselves against armed tyrants.

The Second Amendment to our Constitution says, “A well regulated militia being necessary to the security of a free state, the right of the people to keep and bear arms shall not be infringed.” Before you say that armed citizens cannot be a militia, remember that that the very definition of a militia is that it is composed of non-military citizens bearing arms.

And don’t forget that in 2008 The US Supreme Court ruled that the Second Amendment protects an individual's right to possess a firearm, unconnected to service in a militia and to use that arm for traditionally lawful purposes, such as self-defense within the home.

I have written over 600 articles for www.ConservativeTruth.com over the years, and only one or two of those articles have been about gun rights. But when I see cynical amoral Liberals band together to use a tragedy like Aurora as a tool to reelect one of the worst presidents to ever disgrace the White House, it makes my blood boil. I had to speak up.

If gun bans worked, would Washington, DC and Chicago be two of the most dangerous cities in America? Both have total gun bans in place. The citizens can’t defend themselves, but the criminals have all the guns they want.

Nations that have banned gun ownership in recent years have seen crime actually increase. In the four years after the UK banned handguns completely, gun crime rose by an amazing 40 per cent. After Australia banned most types of gun ownership and made it a crime to use a gun for self-defense, armed robberies rose by 51%.

An irony of the Aurora killings is that a Denver woman who was killed in the theater was a survivor of a previous tragic shooting. Jessica Ghawi escaped death a month ago during a rampage shooting at the Toronto Eaton Centre mall. She walked out of the mall just minutes before a gunman sprayed the food court with bullets.
The irony is not so much that she escaped death in one rampage only to die in another. The real irony is that Canada has very strict gun control laws, and Toronto has far more stringent laws than the rest of the nation. But Toronto has more gun crimes than any other Canadian city.

Only God can remove the desire to murder from a man’s heart, and even God can’t do that unless the man is willing to turn his life over to Him. Until every criminal in this country turns to the Lord, we need to preserve our Constitutional right to bear arms and protect our families.