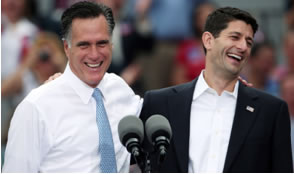 R&R is military slang for rest and recuperation (or rest and relaxation), and is a term used to describe the time a member of the U.S. military gets to spend outside a combat zone. I think all of us can agree that the U.S. needs some serious R&R after the last three and a half years in which Obama has attacked everything good about our nation and its heritage.  He has attacked our Constitution, the Biblical foundations of our nation, our free enterprise system, the idea of American exceptionalism, and the very freedoms that make this nation so special.

We need a whole bunch of “Rs” after all we have suffered under Obama’s presidency: Rest, Recuperation, Relaxation, Respite, Relief, Rehabilitation, and – most of all – Restoration. Fortunately for America, R&R has arrived in the form of Romney and Ryan.

American conservatives have watched anxiously to see who Governor Mitt Romney would tap for his running mate. Many names were floated, most of whom were mentioned because they could supposedly clinch one state or another for Romney in the general election. But Romney understood that we needed more from his vice-presidential pick than just winning a particular state. Much more important was the signal that his choice would send to conservatives.

We needed to know that the ticket would embrace conservative, Constitutional values, and that it would be able to firmly and articulately defend the free enterprise system that has been the bedrock of America’s prosperity.  Paul Ryan will prove to be the best choice to help Mitt Romney in both of those crucial areas.

And it doesn’t hurt that he is youthful, energetic, and has a great smile!

Seriously, VPs are often picked because of a perception that they can bring home a certain group of voters.  Marco Rubio’s name was often bandied about as a great choice because he could help deliver Florida and also help to influence Hispanic voters.  Presidential candidates also pick running mates when they think the choice can help fill in gaps in their own résumé.  For instance, Obama had zero understanding of foreign policy, so the Democratic establishment insisted that he choose Joe Biden because of his alleged experience in this area.  (The failed foreign policy of the last three and a half years has shown how erroneous and futile that hope was.)

Political pundits are fond of saying that vice presidential candidates are inconsequential, that they make no difference in the outcome of the election. That may be true in many elections, but I think Ryan will help win this election for two reasons:

First, the debates have become increasingly more important in deciding elections in recent decades. When debates were first televised they didn’t have as much impact as they do today, because television was not that big a deal. (I’m showing my age, aren’t I?)  But in the last few election cycles there have been many times when debates turned the tide.  I am personally looking forward to seeing Ryan mop up the floor with Bumbling Joe Biden. When he faces an articulate, well-prepared Paul Ryan he’s not going to know what hit him.

Second (and more importantly), the pundits are right when they say that this election is going to be all about the economy. The old phrase, “It’s the economy, stupid” has taken on a whole new meaning in this election. It’s not just the sluggish so-called “recovery.” It’s not just the fact that we’ve had 40 straight weeks of unemployment north of 8%.  It’s not even the fact that we face the largest tax increase in U.S. history next January if we don’t fire Obama.

No, the critical factor is the national debt. Obama has increased the debt by more than $5 TRILLION dollars. That’s a 50% increase in three and a half years.  Folks, that’s more debt than George Bush added in the eight years of his presidency.  In fact, that’s more than the last FIVE presidents combined have increased the debt.  In addition, the average rate of government spending for the last four presidents was less than 20% of our GDP (Gross Domestic Product).  Under Obama that rate has increased by 25% to more than 24% of GDP.

Paul Ryan, as Chairman of the House Budget Committee, has been the most resounding and articulate voice in the nation when it comes not just to the need to reduce the debt, but also formulating solid solutions to this current dilemma, this terrible problem.  He has gone head-to-head with Obama in deficit and debt reduction meetings and bested him. Ryan’s solid understanding of economics and budgetary issues made it clear that Obama is way out of his league in these areas. 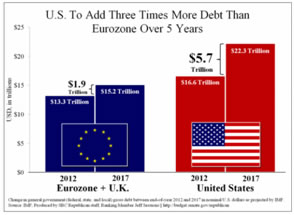 The chart at the right shows graphically the extreme danger the United States currently faces.  As serious as the debt problem is in Europe, if Obama gets four more years to pillage our economy, the U.S. debt will rise three times more than the debt of the European Union and the United Kingdom combined.

Both Romney and Ryan have demonstrated that not only do they understand the problem; they are committed to dealing with it.  All Obama has done and continues to do is to try to change the subject. All of his personal attacks against Romney (including his Super Pac’s claim that Romney causes people to get cancer and die) have been for one purpose: to draw our attention away from the fact that Obama doesn’t understand that the debt is killing our country, and that all he has done about it is to massively increase it.

The average American family of four today owes $250,000 towards the national debt. That quarter of a million dollars does not include a penny of their personal debt (mortgage, credit card debt or student loans). That’s their share of the unsustainable debt that the government owes – in large part because four years ago we were stupid enough to elect a man who had never run anything but a campaign.

Your children and grandchildren will be paying for that mistake for generations to come. Let’s stop the bleeding with some R&R.  Let’s put two men in the White House who know that we are about to go over a cliff – and who have a plan to stop the insanity.  Let’s break the chains of debt.