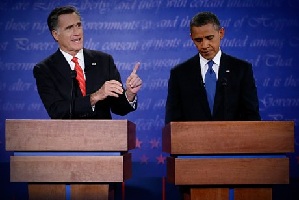 By all accounts – including those of Obama’s own spokesman – Romney won the first presidential debate. Ever since then, Obama and his henchmen have been working hard to spin his defeat into some semblance of a victory.

First, let’s look at what the news media, political commentators, and even Obama’s own campaign staff had to say about the debate in its immediate aftermath. Then we will look at the spin Obama’s team has tried to apply to his defeat, and at the myriad of conflicting excuses so many of his spokesmen have used to explain what, to them, was inexplicable – Obama losing to Mitt Romney.

Going into the debate, the polls were clear – more than two-thirds of voters believed Obama would win, hands-down. This sad commentary simply represents  the fact that the majority of  Americans cannot  think for themselves. They are spoon-fed by the media on a daily basis as to what they should believe, and so they believe it. The media said their boy would win, so most Americans – like sheep – parroted the media party line.

But the “Obama-bots” didn’t even wait until the debate was over before admitting defeat. The foul-mouthed Bill Maher, Obama’s biggest single financial supporter to the tune of $1 Million, tweeted this halfway through the debate: “I can't believe I’m saying this, but Obama looks like he DOES need a teleprompter.”

CNN, a notoriously liberal network (nicknamed the Communist News Network) did an InstaPoll right after the debate. Roughly two-thirds of its mostly liberal audience decisively conceded that Romney wiped up the floor with Obama.

A Reuters poll showed that 20% of Americans felt the debate made them look at Obama more negatively, while over 30% said Romney’s performance in the debate made them feel more positive about him. Those are astounding statistics! Twice as many said that Romney beat Obama as people who thought Obama won. (The Reuters poll – see LINK below – interviewed 1,728 registered voters and 1,434 likely voters. This is an unusually large sample for a poll.)

In general, Obama was described by both liberals and conservatives with a variety of words, none of them complimentary: “taciturn, lackadaisical, distracted, disconnected, peevish, dispassionate, lethargic and angry.” Proper debate decorum requires that a debater show a modicum of respect by at least looking at his opponent when he is speaking. Romney did this, with a frank, pleasant expression on his face, whenever Obama spoke. Obama, on the other hand, refused to look at Romney, seeming to focus his anger on his podium (and his pencil) as he stared down at it, if his acerbic expression was any indicator.

So how does Team Obama spin such a devastating outcome? The plethora of instantaneous excuses was amazing! They typically convene and concoct talking points which they then dutifully regurgitate to anyone stupid enough to buy them. But apparently they were so shocked by Obama’s loss that they independently explained his lack of capability with – well, whatever popped into their pea brains.

Quite a number of them blamed the moderator! This is quite ironic, since Jim Lehrer of PBS fame, is a dyed-in-the-wool liberal. I remember saying to one of my friends that Romney shouldn’t have agreed to a debate moderated by Lehrer because he is well known for being anything but moderate.  It seemed perhaps Lehrer may have been coached prior to the debate to throw Obama a lifeline if he was sinking, as evidenced by the surprising request Obama made of him, while the focus was on debt – “can we change the topic?”  One would surmise that he would never have made such a plea to a conservative moderator.

The most ridiculous excuse award goes to Al Gore – who blamed Denver’s altitude! The narrative goes that Romney was in Colorado for several days preparing for the debate, while Obama arrived the afternoon of the debate. This was supposedly the reason for Obama’s lack of energy and enthusiasm. (Perhaps Al Gore did not recall that the President had no altitude issues when he was entertaining his fans in Colorado in August.)

Now John Kerry is being blamed by the Obama campaign for the loss, since Kerry played the part of Mitt Romney in Obama’s debate practice. The current narrative is that Kerry failed to “channel Romney’s aggression” sufficiently. Obama is the master of excuses, but blaming Kerry? That’s really pathetic.

There are three reasons why Obama’s 2008 “Hope and Change” campaign has morphed into 2012’s “Mope and Blame” campaign. First, Obama has been in the White House for four years. He has confused his office with his person. Everyone defers to the president, even those who hate him. Interviewers throw him softball questions (all of which he requires be submitted in advance) because they want him to return. Even the White House press corps, usually the ones who make presidents toe the line, have been afraid of Obama’s vindictiveness. Simply put, Obama is not used to being challenged. Faced with an opponent who is much smarter and more articulate, and who dared to challenge him, Obama simply fell apart.

Second, he didn’t have his props – the things that usually make him seem to be an effective communicator. Obama truly is an empty suit. Yes, he was raised by Marxist parents and mentored by an avowed Communist. Yes, he leans far to the left in his ideology. But he is unable to verbalize a single original thought without his props. These include his speech writers and handlers; crowds of adoring supporters who hang on his every word; and, of course, his ever-present teleprompter (By the way, yesterday was the fifth anniversary of his affair with his real lover, his teleprompter.)

Finally, on an international stage with 67 million people watching him, Obama couldn’t pull out his usual playbook. On the campaign trail he’s used to speaking to mobs of adoring sycophants who will cheer and clap at whatever garbage he spews out. With them his typical repertoire of rich-bashing, race-baiting and class warfare draws worshipful adulation. On the formal stage of the debate, he would have simply looked like a nut job. So had no choice but to stand there and take his licking.

It is worth mentioning one noteworthy element resulting from the debate that was a slap in Obama’s face by the AARP. Obama repeated several times that the extremely far-left AARP (the American Association of Retired Persons) endorsed Obamacare. The following day a group spokesperson vehemently stated that they certainly had not endorsed the plan, and that they did not appreciate the usage of the AARP name for political purposes.

Obama’s biggest mistakes were contempt and pride. Obama insiders have told reporters privately that he is contemptuous of Mitt Romney. That contempt convinced him that Romney would be a pushover. His pride led him to think he could just breeze onto the debate platform and win with just his famous wit and charm. The Bible has a great piece of advice for Mr. Obama: “Pride goes before destruction, and a haughty spirit before a fall.”

INTERNET RESEARCH:
Administration Spokesman Acknowledges Obama Fell Short in Debate
http://blogs.wsj.com/washwire/2012/10/07/adviser-acknowledges-obama-fell-short-in-debate/
FORBES: Why Obama Lost the First Debate - And Might Lose the Next Ones
http://www.forbes.com/sites/richardsalsman/2012/10/07/why-obama-lost-the-first-debate-and-might-lose-the-next-ones/