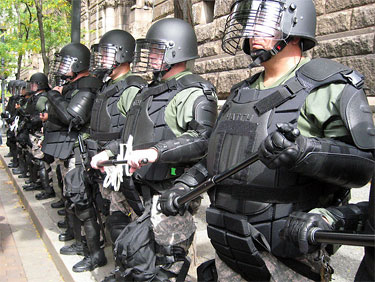 All across the nation today spouses of police officers are saying, "Honey, you have to quit. We need you." Children are saying, "Daddy, please don't go to work today." And many of the officers themselves, brave as they are, are thinking, "Is it worth it? I can't provide for my family if I'm in a body bag."

As a former police officer myself, I can certainly understand the feelings of both the families and the officers. Twelve police officers were shot without warning, many in the back; five of them have died; and others are in critical condition. Police officers and their families certainly have reason to think seriously about their futures, especially in view of the rash of assassinations of police in the last year.

On Thursday, July 7 brave police officers were protecting people who were protesting against police officers. Unlike most Black Lives Matter protests, this one was peaceful - until it wasn't. As sniper fire rang out the police officers ran toward the shooters to protect the protesters, as the protesters ran the other way. I wonder if they were thinking, "Thank God the police were here." Were they regretting their favorite chants, "Pigs in a blanket, fry 'em like bacon!" or "What do we want? DEAD COPS! When do we want them? NOW!"?

The Black Lives Matter movement, and their supporters Jesse Jackson, Al Sharpton, Barrack Obama and Hillary Clinton believe that police officers are racists. Sometimes, like Jackson and Sharpton, they come right out and say it. Obama and Hillary claim that they appreciate cops, then in the next breath they imply that they are racists. All of this contributes to the poisonous atmosphere in this country that makes hateful racist murderers think it's OK to kill innocent cops.

The Democrat Governor of Minnesota, Mark Dayton, rivaled Obama in his rush to judgement in a police shooting of a black man this week. Without any investigation, with few facts known, with the only witness obviously biased, he played the roles of judge and jury, convicting the officer in the media. "Would this have happened if those passengers and the driver were white? I don’t think it would’ve."

First of all, we don't care what you think, Governor. We care about facts.

Second, here's a news flash for you. Every non-black person who shoots a black person is not a racist. (The officer was Hispanic.) By the Governor's logic, if a black officer had shot a white civilian, he would be a racist. But although that happens just as often as whites shooting blacks, you'll never hear a liberal like the Governor talk about it.

Dayton made another extremely inflammatory statement, after admitting that he didn't have all the facts. "Nobody should be shot and killed in Minnesota for a taillight being out of function." What an asinine statement! The man was shot because he had a gun and the officer thought he was going for it. If I know that from news reports, this ridiculous excuse for a public official certainly knew it. Yet he makes this statement, knowing it will incite further hatred and anger toward police.

I believe the Governor, Hillary and Obama bear responsibility for what happened in Dallas this week. No, they didn't tell anyone to kill cops. Nor did they say it was OK to do so. But their inflammatory statements contributed to the malignant atmosphere that made some people think that killing cops was a legitimate form of protest. They all spoke or wrote within hours of the shooting. And none of them knew the facts. But they did not hesitate to accuse the police of racism.

Hillary Clinton wrote on Twitter: “America woke up to yet another tragedy of a life cut down too soon. Black Lives Matter.” (She forgot that Blue Lives Matter as well.)

Obama spoke from Poland: “All of us as Americans should be troubled by these shootings because these are not isolated incidents, They’re symptomatic of a broader set of racial disparities that exist in our criminal justice system.” That feeds directly into the Black Lives Matter group's false narrative that blacks are routinely targeted by police.

Here are two facts that should trouble every American. First, because of Dallas many major cities have ended solo police patrols, whether on foot or in radio cars. Officers will only be allowed to patrol in pairs. This means that effectively these police departments will have half the patrols they had before. Half the ground will be covered. Half the protection will be available.

Second, as a result of the Dallas killings, with the worst loss of police lives since 9-11, we will lose police officers. Every police officer who woke up this morning and put on his uniform and badge knew he or she was a marked person with a target on their back. Some will resign, not because they are cowards, but because they know our leaders don't have their backs. Some will retire early. And thousands of young men and women who had considered applying for the police academy will choose another occupation.

And then who will protect us?