If anyone thinks the Soviets stopped persecuting the church when the Soviet Union broke apart, they should understand what is happening today in Belarus. This country was part of the USSR, but today its government functions as a Soviet-style dictatorship with close ties to Moscow. And it is in the process of stealing the place of worship of an Evangelical church in Minsk, The New Life church.

Belarus, a small republic, declared its independence from the USSR on August 25, 1991 as the Soviet Union dissolved. In 1994 Alexander Lukashenko became its egocentric president, and over the last 18 years he has flaunted his dictatorship as a badge of honor.  Through brutal suppression of all political opposition and through rigged elections, he accomplishes his goals with brutal control, exhibiting no desire of bowing to pressure from the west.

In 2002 the Belarus government passed the stringent, repressive Religion Law that declared all unregistered religious activity illegal, just as the old Soviet Union had done. New Life church, which was founded in 1991, repeatedly applied for registration, but its application was denied with no reason given. Being part of the leadership of an unregistered church can result in up to two years of imprisonment. Four churches in Belarus have been closed by the government in the last year. 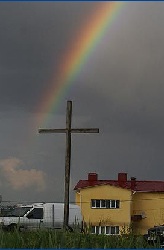 New Life owned a farm with an old building in it. Over the years they spent hundreds of hours and much donated money to build a worship center on their property. In August of 2009 the Belarusian government issued an eviction order against the church. Even under the threat of bulldozers prepared to demolish the building, the people refused to leave.

They stayed in the church, fasting and praying for 40 days. In the photo above you can see the people camping in the church. (If you receive this newsletter by email, I suggest that you go to www.ConservativeTruth.org to see the photos.)  Finally the government relented, and the church was permitted to continue to worship in their building. Today about 1,300 believers meet there.

But now a new crisis has arisen. My friend George Bakalov, who has founded and is overseer in many churches in Bulgaria and other countries, has been in touch with the leaders of New Life. Though George is denied entry to the country because of his apostolic leadership, he has sent this urgent appeal to Christians worldwide: 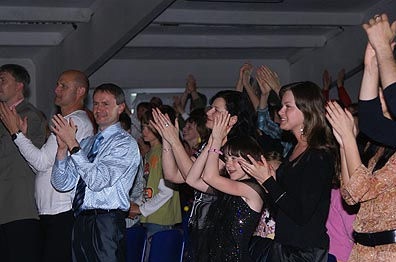 “I just received this email today from our friends over at New Life Church in Belarus. As you know I’m banned from Belarus and can’t come in due to the hostility of the dictatorial government of Alexander Lukashenko. They plan to confiscate the building. Again!

“Let’s not let them think that we, the Body of Christ, will sit silently as this demonized government prepares to seize the property of this church.

“The Government already tried to confiscate the building once and the church refused to leave that place, after which the Belarusian government backed off. Let your voices be heard in the Heavens in prayer! Also, let your voices be heard in high-places here in the United States! You can use this web app to look up who your elected officials are and how to contact them: http://whoismyrepresentative.com”

The church recommends that supporters also contact the Belarusian Embassy in their countries: “Today, November 27, we at New Life church received a court summons from the Supreme Economic Court, in which our church is to vacate its building, then turn over the keys to representatives of the Moscow District Household Management Department of the Minsk City no later than December 5, 2012.

“Transfer of the church building and its keys to the representatives of the Minsk City Household Management Department is to be carried out on December 5, 2012 at 11 AM.
We are not going to give up our church nor our right to worship the Lord there! Please forward and share this news with your friends, your Congressman, your Senators, newsmakers, media outlets, reporters and send protest letters to the Belarusian Embassy in your nation.”

Here is the contact information for the Embassy of Belarus in Washington. Remember that the eviction is to take place just two days from the publication date of this article. So don’t send a letter if you write – overnight it. Let’s bombard them with overnight letters, faxes, emails and telephone calls. Prayer is the most important way we can help this church, but it won’t hurt to put wings to our prayers by letting the Embassy of this dictatorial government know that the eyes of the world are upon them: