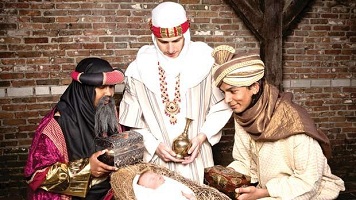 The scene is a birthday party. We’ve all been to many of them. But this one is different. The guests have all brought presents for one another. But no one has thought to bring a gift for the person they have come to honor. No one has a present for the birthday boy.

But we have made Christmas into something different. We have morphed it from giving to Jesus into giving in general. We have heard it a thousand times: “Christmas is all about giving.” That is true, but we have forgotten about Who we are supposed to give gifts to.

Am I against giving gifts at Christmastime? No. In fact, we have incorporated the Christmas story into our gift-giving to our daughter. Jesus received three gifts, so we give her three gifts every year. We have found that by doing this (instead of showering her with many gifts as parents often do) we have avoided spoiling her. We have also discovered that because of this she appreciates what she receives more than many children seem to do.

I have seen too many kids rip open a package, look at the present briefly, and then say, “What else?” instead of “Thank you.” Too often those gifts end up in a pile after being played with once or twice.

But, more important than appropriate gift-giving to one another, is the subject of how we can give to Jesus, the One Who gave everything for us. Here are some suggestions:

First, and foremost, give yourself to Him. More than anything else, Jesus wants you to surrender to Him. “I stand at the door and knock. If anyone hears my voice and opens the door, I will come in.” He wants to be a part of your life – the most important part. We can’t begin to understand giving until we receive the gift of eternal life.

Second, give to the poor. Jesus said, “Whatever you did for the least of my brothers you did for me.” When you help those in need, you are not just giving to them – you are giving to the Lord.

Third, give to His work. Jesus’ words make it clear how important this is: “Store up for yourselves treasures in heaven…For where your treasure is, there your heart will be.” When we invest in His work, our heavenly investment account grows.

Finally, give sacrificially. Many times when the offering plate is passed I notice people looking around to see if anyone notices whether or not they pull out their wallet. Then they will grudgingly pull out a dollar bill and drop it in.

Contrast that with the story of a widow who gave two copper coins worth less than a penny. Jesus’ comment to His friends was, “This poor woman put in more than the rich people did. Here's why: the rich people still have much money left. But this woman only had two coins. She did not have any more money. The rich people only gave part of what they had. She gave all of what she had.”

It’s just a few days until Christmas – Jesus’s birthday. Don’t forget to give to the birthday boy.

Conservative Truth is accepting applications for our new Editor-in-Chief. Phil Perkin’s shoes are going to be hard to fill. He gave excellent service to his nation and the Conservative cause over the last six years in this position. But, as he said in his article this week (Hail and Farewell), it is time for him to pursue other priorities.

These are the qualifications for the position:
1) A true Biblical and Conservative worldview.
2) A facility with words – not just the technical aspects of editing, but also having the courage to edit a writer’s style and content when necessary to produce a better article.
3) May or may not write articles him or herself, but must have the ability to recognize and encourage good writing.
4) Able to give two hours each week to this important work.
5) Must be conversant with the important issues of the day.

If you have these attributes and abilities, please contact Tom Barrett at the email address above. Include your phone number, and you will receive a phone call either before Christmas Eve, or after the first of the year. Feel free to recommend someone you know and respect.