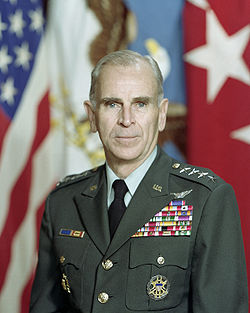 It's a shame that heroes often don’t receive the honor they are due until after they die. I’m ashamed to say that I never heard of an extraordinary American general, John W. Vessey, until I saw a notice on FOX News that he had died at the age of 94. I see many such notices every week, and almost ignored it, but something prompted me to do some research on this gentleman.  What I found made me glad that I had the opportunity to learn about this exceptional man.

In 1939 John Vessey enlisted as a private in the National Guard. When he retired 46 years later, he had not only attained the highest normal rank in the Army – four star general – but he had risen to oversee all branches of the US military as Ronald Reagan’s Chairman of the Joint Chiefs of Staff. He was only the tenth Chairman up to that time. (Today the 15th Chairman, Marine Corps General Joseph Dunsford, serves in that position.)

How hard do you think it is to join the Army as a private and become even a one star general, much less the highest ranking military man in the nation? Well, there are about half a million personnel in the Army, and 315 generals of all ranks. That would seem to put the odds at about one in 1660. But it is actually much more difficult than that. It’s not like starting in the mail room of a corporation and eventually becoming the CEO.

There are nine enlisted levels in all our branches of the military. The titles vary, but the pay grades are the same: E1 through E9. If an enlisted person is a leader and performs his or her duties well, advancement through the ranks occurs. But there are only 3,687 E9’s currently in the army – less than 1%. And that’s the highest most enlisted people can expect to go. There is very little opportunity for an enlisted man to become an officer, although sometimes an E6 or higher may be accepted into OCS (Officer’s Candidate School).

The military likes its officers to have four-year college degrees. Sometimes it even takes rank civilians with zero military experience and slaps bars on their collars to fill specialized positions (physicians, lawyers, scientists). But the more normal route to rank is graduation from a service academy like West Point; an ROTC program during college; or earning a college degree while in the service. The irony is that very often the college education contributes nothing to the officer’s preparedness to serve, because the military will accept a liberal arts degree as readily as a hard science degree. In many cases the only thing it proves is that he or she stuck to something for four years.

But the biggest impediment to breaking through the enlisted-officer wall is that there is something of a caste system in the military. I grew up on Air Force bases in the home of a high ranking officer. I learned young that there is a complete separation between enlisted people and officers – different housing, recreational facilities, and social environments (fraternization was NOT encouraged). Even the children of officers were treated differently than the children of enlisted personnel. Later I enlisted as a private in the Marine Corps during the Viet Nam War, so I personally experienced what it was like being on the “other side of the tracks”.

So it should not be surprising that the people who decide promotions – all of them officers – tend not to promote from within the ranks. But this is America. And exceptional people often rise to the top, regardless of the obstacles.

Vessey enlisted at age 17, when Nazi Germany was threatening the world. He fought bravely in Northern Africa and then Italy. In five years of service he had advanced to First Sergeant (E8) by the time he landed on the Anzio Beachhead in May, 1944. There he received a battlefield commission as a second lieutenant during the battle of Anzio. These types of commissions can occur when an individual exhibits extreme bravery or leadership. The need for such promotions is often the result of the deaths of officers, creating a leadership vacuum.

Vessey served in Korea, Germany and Viet Nam, advancing in rank through demonstrated leadership and commitment. By the time Vessey became a lieutenant colonel, he had earned enough college credits for a Bachelor of Science degree from the University of Maryland. In 1965, he received a Master of Science degree from George Washington University. He was promoted to brigadier general in 1971. He earned his fourth star in 1976 and was put in charge of all U.S. and U.N. forces in South Korea.

In 1982, when Vessey was building his retirement home in his beloved Minnesota, Ronald Reagan asked him to defer retirement and serve as the Chairman of the Joint Chiefs of Staff. Keep in mind that, although he was entering a political job, Vessey was not a political animal (as many high-ranking military officers are, or become). He was not a self-promoter and did not lobby for the position, as is usually the case. He did his job as a soldier, and when asked to serve longer he answered the call.

The heads of the various service branches make up the Joint Chiefs. Make no mistake; they almost always attain those positions by understanding the political landscape and playing the game well. This is also true of the Chairman, except multiplied by five. But that was not John Vessey. He did not play political games. Years earlier he demonstrated his character when he opposed Jimmy Carter's proposal to withdraw from Korea. This cost him a promotion to Army Chief of Staff.

According to Lawrence Korb, who worked with Vessey as an assistant secretary of defense, “Congress didn't strengthen the Chairman's role until 1986, so while Vessey was nominally in charge, he had to lead by consensus. Vessey had the perfect temperament for that.”

Vessey oversaw the military buildup that Reagan had promised. In a 2004 interview Vessey related, "It was probably the greatest peacetime modernization of the American military establishment that ever took place. We improved every facet of the armed forces, from the recruiting and retention, the selection of individuals, to the way they lived, but most importantly to the way they fought."

During this time the Soviet Union had been making a major push to consolidate its position in Europe. It placed nuclear missiles in East Germany and built up Soviet ground forces there. NATO was young and weak, and the USSR undermined it through espionage and covertly influencing European elections. But by the time Vessey retired in 1985, NATO had been strengthened; the United States had deployed missiles in Europe to counter those of the Soviets; and Europe was stable. This laid the foundation for the eventual Reagan/Thatcher peaceful dismantling of the Soviet Union.

Even after he retired, Vessey answered the call of duty. According to FOX News, “Reagan sent Vessey back to Vietnam in 1987 to account for Americans missing in action and bring back any still alive. His other tasks included reuniting separated families and getting former South Vietnamese leaders out of prison camps, Amerasian children out of Vietnam and the Vietnamese out of Cambodia.”

"In typical Ronald Reagan optimistic fashion, he said, 'Well, it ought to take you about three months,'" Vessey recalled with a laugh. "Six years later I told Bill Clinton that I had checked off all of those things and would like to be relieved."

In retirement, General Vessey raised funds for Christian colleges; chaired the advisory board of the Center for Preventive Action, an organization formed to prevent conflicts before they erupt; and consulted for the Defense Science Board and the Army Science Board.

At his retirement ceremony, Ronald Reagan spoke these words: "Jack Vessey always remembered the soldiers in the ranks; he understood those soldiers are the background of any army. He noticed them, spoke to them, looked out for them. Jack Vessey never forgot what it was like to be an enlisted man, to be just a GI."

He won numerous medals, including Presidential Medal of Freedom. In awarding the medal, George H.W. Bush called him, "the ultimate never-say-die soldier, the last four-star combat veteran of World War II to retire."

But his daughter, Sarah Vessey, paid him the ultimate tribute. "He never strayed from his morals or values or faith; and he was an extraordinary patriot."