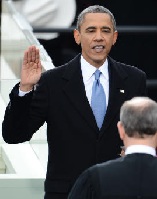 As I watched Barrack Hussein Obama’s second inauguration, the words he spoke during his speech did not catch my attention as much as a phrase he recited from his oath of office: “I will, to the best of my ability, preserve, protect and defend the Constitution of the United States.” Despite all the highly structured, ever-inspiring words his speechwriters wrote for him, I seriously doubt his sincerity when he swore his oath to preserve, protect and defend our Constitution.

I hate to be the one to throw a wet blanket on the temporary warm fuzziness that tends to overcome common sense at times like this. Yesterday Obama viciously attacked the integrity and patriotism of any and everyone who didn’t agree with his extreme liberal views and policies. Today he pled for unity and togetherness. Does anyone really believe that he will not return to his hate speech tomorrow?

Why do I believe, despite all his poetic words to the contrary, that Obama does not intend to “preserve, protect and defend the Constitution?” The answer is very simple. He swore the exact same oath four years ago. Yet for the last four years he has done just the opposite.

To Preserve means “to keep alive or in existence; make lasting.” Obama has not worked to preserve the Constitution. On the contrary, he has been a major force in the liberal movement to change the Constitution so significantly that our Founding Fathers would not recognize it.

To Protect means “to guard from attack or invasion.” Far from guarding against attacks, Obama has led the attacks on the Constitution since he has been in office. The most recent has been his complete about-face on the Second Amendment. His views haven’t changed; he has always hated guns. But he remained silent on the topic throughout his first four years in order to get re-elected. Now his true colors emerge in his all-out attack on the Second Amendment.

Listening to Obama on Chicago talk radio on January 18, 2001: “The Supreme Court never ventured into the issues of redistribution of wealth and sort of more basic issues of political and economic justice in this society.  And to that extent, as radical as I think people tried to characterize the Warren Court, it wasn't that radical.  It didn't break free from the essential constraints that were placed by the founding fathers in the Constitution.”

Listen to the man. He’s upset because the Supreme Court hasn’t “ventured into” socialism by addressing “redistribution of wealth.” He believes that Chief Justice Earl Warren’s court, the most radical court in memory, “wasn't that radical.” Warren led the decision that ended school prayer.  As Attorney General of California, he also led the movement to put 110,000 U.S. citizens of Japanese descent in concentration camps in the U.S. Even worse, Obama complains that the Supreme Court “didn't break free from the essential constraints that were placed by the founding fathers in the Constitution.” Does a man who wants to “break free” from the “constraints” of the Constitution sound like someone who has sworn an oath to preserve, protect and defend it?

Enough of that. I’m getting depressed thinking about a man who is so antagonistic toward the Constitution being one and the same placed (yet again) in charge of preserving, protecting and defending it. On Monday Obama spoke to a crowd a fraction of the size of his first inauguration. Let’s take a few minutes to look at the semi-subliminal clues Obama gave us in his speech about what the next four years will bring.

MORE ATTACKS ON THE CONSTITUTION: In his speech he quoted the Constitution, giving me momentary, foolish hope that he had morphed into a patriot. That hope was dashed when he said: “Today we continue a never-ending journey, to bridge the meaning of those words with the realities of our time.” More “living Constitution” hogwash, with the transparent translation: “Let’s bring the antiquated writings of some old fools up to the 21st century thereby befitting my socialist agenda.” The worst part is that he will not be content to just change the Constitution a little bit. He says that the destruction of our Constitution is a “never-ending journey.”

MORE SPECIAL RIGHTS FOR INSTITUTIONALIZED PERVERSION: “Our journey is not complete until our gay brothers and sisters are treated like anyone else under the law – for if we are truly created equal, then surely the love we commit to one another must be equal as well.” He is, of course, speaking of the destruction of marriage, which the Liberals now call “marriage equality.” Their PR people told them that “equality” sounded better, and it has been working. Even some foolish Christians and Conservatives have fallen for it. Shouldn’t everyone have “equal rights?” Unfortunately no one understands where this all leads, this rhetoric that is successfully blurring any former line of delineation. Pedophiles have been agitating for man-child marriage for years. If we let two men marry one another, why not a man and a boy? Or, if marriage is not the union of one man and one woman, what is wrong with one man and three women? Or a woman and her dog? Far-fetched? All of these things are happening underground today. Once we change the definition of marriage, as Obama wants to do, where will it stop?

MORE HYPOCRISY CONCERNING WOMEN AND MINORITIES: “Our journey is not complete until our wives, our mothers, and daughters can earn a living equal to their efforts.” That sounds good, and it helps him get female supporters. But the fact is that the few women in positions of responsibility in his own administration are paid about two-thirds of what men in the same positions receive. And virtually every one of his second-term Cabinet appointees have been white men. Apparently Obama is one of those civil rights advocates who only believes in rights for himself. Listen to women’s groups and black organizations. They consistently voice their complaints that Obama has done nothing to advance their causes.

MORE GLOBAL WARMING NONSENSE: “We will respond to the threat of climate change, knowing that the failure to do so would betray our children and future generations. Some may still deny the overwhelming judgment of science, but none can avoid the devastating impact of raging fires, and crippling drought, and more powerful storms.” After decades of bleating about “Global Warming” the shaky “Science” behind it was discredited. The earth was actually cooling. So they changed their mantra to “Climate Change.” Both have one thing in common – they have nothing to do with any real impact of humanity on the planet. We have had cycles of warming and cooling, of drought and rain, of shifts in the ozone layer for thousands of years – long before man invented technology that might have some miniscule effect on these things. (The effect of one eruption of Mount Saint Helens is far greater than the cumulative effect of all automobile emission since they were invented.) The real purpose of Obama and his Liberal minions pushing these myths is to gain ever more government control of all aspects of our lives.

MORE IRREPARABLE HARM TO OUR ECONOMY: “An economic recovery has begun.” Really? How stupid does he think we are? We have the lowest economic growth rate in decades – less than 2%. “We understand that outworn programs are inadequate to the needs of our time.” That’s right; the current programs haven’t driven us deeply enough in debt to satisfy our Economist-in-Chief. We need more programs – more welfare, more food stamps, more handouts, new “rights.” Did you know that you have a Constitutionally guaranteed “right” to a free cell phone, according to Obama? It’s not widely known, but you, the American taxpayer, are paying for the cell phone usage of tens of thousands of welfare recipients. I know many struggling middle-class families that can’t stretch their budgets to afford a cell phone. But the taxes they pay on their hard labor are paying for cell phones for many people who refuse to work. (Yes, I know some people cannot work. But millions more who are able-bodied receive welfare and food stamps.)

MORE AND MORE DEBT: The White House had told us to expect a speech in which Obama “reached across the aisle,” a speech that would indicate that the tone of this second term would be more accommodating to the views of others. Instead of holding out an olive branch to Conservatives and patriots, he threw down a gauntlet of challenge to anyone who dared defy the unlimited power of his Imperial Presidency. The only ones to whom he reached out were those who would help him gain control of Congress in two years, and thus ensure his ability to add another $10 trillion to the National Debt. The lies he told with the promises he made were all focused on groups that have voted for him in two elections: homosexuals, lesbians, so-called bi-gender and trans-gender people, women, the elderly, and illegal immigrants. The fact that he did nothing for any of these groups in his first four years seems to have made no difference; they voted for him again because he said that he had helped them. And of course the associated programs he has proposed will drive us deeper and deeper in debt.

All-in-all, if you are a fan of fiction, Obama’s speech was pretty good. His flowery oratory seems to have inspired the mindless minions that came to worship at the foot of King Obama’s throne. A rather amusing observation was Beyoncé (who, as it turned out, faked her performance of the National Anthem) gaining much more thunderous applause than Obama did. I don’t understand why -  they both lip-synched their performances; she to a sound track, Obama mouthing words prepared for him by political operatives. Perhaps she got more applause for being prettier.

VIDEO: The Era of Liberalism is Back
http://www.huffingtonpost.com/2013/01/22/mitch-mcconnell-obama-inauguration-speech_n_2528485.html

MY APOLOGIES:
Regular readers have sent us hundreds of emails wondering why Conservative Truth was not published the last two Mondays. The reason is that I was in Intensive Care for a week, and then on a Telemetry floor in the hospital for half a week with a life threatening condition. (My heart-felt thanks to all of you who were praying for me. Please continue to pray for a complete recovery.) Unfortunately, this period coincided with a time frame where we were transitioning from one Editor-in-Chief to a new one, and I was temporarily handling the editorial responsibilities as well as writing my own column – neither of which I was able to do.  We’re back on track now, so you can look forward to your weekly dose of Conservative Truth.