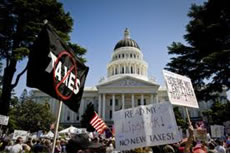 Early in his first term a television reporter asked Obama a searching question: “What do you think the American people should be willing to sacrifice in order to get our economy back on track?” Obama’s answer was predictable for a politician: “They’ve sacrificed enough already.”

Really? Obama’s answer demonstrated clearly how out of touch he is with the real world. Yes, Americans had suffered in the economic downturn created by Washington. But only in the wired thinking of ObamaWorld does suffering equate with sacrifice.

Suffering happens to us. Sacrifice is a decision.

The panic of 2008 happened to America – courtesy of years of government meddling in the financial systems. I have written extensively on this (see my Archives at www.ConservativeTruth.org), so I will briefly summarize here.

Jimmy Carter’s administration was the genesis of the housing crash which precipitated the stock market crash. That’s right – the crash that Obama blamed on Bush was initiated by the peanut farmer from Georgia over three decades ago. To understand what happened, you have to recognize that an economy the size of ours turns much more like an aircraft carrier than a speedboat. It takes time for the after effects of change to work their way through the financial systems.

Carter signed the Community Reinvestment Act, or CRA, (which was part of the Housing and Community Redevelopment Act) in 1977, his first year in office. The act was “designed to encourage commercial banks and savings associations to help meet the needs of borrowers in all segments of their communities, including low- and moderate-income neighborhoods.” If you change the word “encourage” to “force,” you get a more accurate picture of the Act.

The description goes on: “The Act instructs the appropriate federal financial supervisory agencies to encourage regulated financial institutions to help meet the credit needs of the local communities in which they are chartered, consistent with safe and sound operation (Section 802.) To enforce the statute, federal regulatory agencies examine banking institutions for CRA compliance, and take this information into consideration when approving applications for new bank branches or for mergers or acquisitions.”

Translation: You WILL give loans to the people we tell you to, regardless of whether they have terrible credit, and without regard to their ability to repay the mortgages. If you don’t do as we say, we will not approve your applications for new branches or for mergers. One of the results of the Act was the lowering of the conservative requirement of 10% down payment to 3%. With very little invested, borrowers were more likely to walk away from their loans.

In 1995, Bill Clinton signed a major overhaul of the CRA which strengthened the government’s already iron-fisted grip on the banking system. Clinton widened the scope of the already outlandish government dictates, forcing Fannie Mae and Freddie Mac (the two primary buyers of mortgages in the U.S.) to accept even less qualified applicants. It also opened the door to the insane 110% and even 120% mortgage programs. Under these parameters, instead of the company requiring the borrower to make a down payment, they would  give the borrower 10% or 20% of the value of the home to fix it up. The majority of these loans were “interest only,” meaning that for a set period (often 5 years) the borrower would pay only interest – no principal reduction - on the loan.

The predictable results were that people renting apartments for $900 a month because they had poor credit, were able to move into a much nicer home for about the same money. The normal payment on such a home, had they been paying principal, would have been around $2,000. Those thousands of dollars that they received at signing and intended to improve the value of the home, were often used to buy drugs or a new car.

Unfortunately, those interest-only loans eventually came to an end, with the borrower now being forced to begin making the payments he should have made in the first place. With no investment in the home, and facing the prospect of $2,000 payments, the borrower, without equity or consequence, would default on his loan and move back into his $900 apartment.

This was the genesis of the mortgage crisis. By 2004, all of the foundational elements that eventually precipitated the Panic of 2008 had been in place for years. Bill Clinton’s very aggressive approach to the enforcement of the CRA had begun in 1998, and the endless appetite for paper by Fannie Mae and Freddie Mac had turned massive amounts of bad loans into mortgage-backed securities that spread their cancer throughout the system.  In 2004, a year after the Bush administration tried to tighten regulation and oversight on Fannie and Freddie, Congress was told yet again that disaster loomed.  The Democratic response is instrumental in seeing who really sat back and allowed this collapse to occur.

In late 2004 the George W. Bush administration warned Congress of the impending crisis, making it clear that Fannie Mae and Freddie Mac would eventually fail (which they did). Democrats cursed the regulators, and accused them of a “political lynching” of Franklin Raines, (White House budget director for the Clinton administration in the 90s)  was the acting CEO of Fannie Mae. Raines later faced criminal charges for his role in the mortgage crisis, and was found to have taken millions in performance bonuses at a time when Fannie Mae was losing money hand over fist. (See the LINK below to actual video of these hearings.)

Democrat Barney Frank claimed that there was no problem with the soundness of Fannie Mae. Franklin Raines testified that his agency’s loans were “riskless.” But everything the Republicans warned about in these hearings eventually came to pass, and the government had to bail out both Fannie Mae and Freddie Mac at massive expense.

The bottom line? As much as Obama and the Democrats try to blame “Big Business” and Wall Street for the financial collapse of 2008, the facts don’t lie. It was the U.S. Government, led by Democrats/Socialists trying to control the economy following the model of the USSR, that caused the Panic of 2008. Republicans/Conservatives tried to avert the catastrophe, but were out-maneuvered by their adversaries.

Enough about the suffering. What about sacrifice?

Dr. Martin Luther King, Jr. once said, “Human progress is neither automatic nor inevitable...Every step toward the goal requires sacrifice, suffering, and struggle; the tireless exertions and passionate concern of dedicated individuals.”

America has always been a nation of self-help individuals, willing to sacrifice for the future. But we have become lazy and self-centered, with a president who encourages this when he says that America “has sacrificed enough already.”

Abdul Kalam, former president of India, holds beliefs opposite to Obama’s. “Let us sacrifice our today so that our children can have a better tomorrow.”

Obama’s philosophy feeds sloth and apathy. Why work when the government is willing to take from others to feed you? Why sacrifice when we can force our children to sacrifice by passing the debt for our overindulgences on to our children?

If we follow Obama’s mindset and refuse to sacrifice today for the future of our offspring, we will not prevail in the greatest challenge of our times: dismantling the infrastructure of debt and entitlement that is crushing the life out of our Republic day by day.

Whether or not you believe, the greatest danger our nation faces is not terrorism. It is the National Debt. We have the know-how to defeat terrorism, but if we don’t have the funds to prosecute the War on Terror, we are doomed.

Admiral Mike Mullen, Chairman of the Joint Chiefs of Staff said on September 22, 2011, “I’ve said many times that I believe the single, biggest threat to our national security is our debt, so I also believe we have every responsibility to help eliminate that threat.” Realize that this is the top military officer in our Armed Services, a man with a unique vantage point who is in possession of all the facts; he recognizes that the National Debt is a far greater threat to the security of the United States than is global terrorism. (See LINK below.)

Speaking to a top group of American businesspeople, Mullen went on to say, “As you know, the president has made a decision to reduce the defense budget by more than $450 billion over the next 10 years.” At a time when our military is stretched thin, Obama is demanding huge cuts to our defense, while insisting that entitlements are sacred.

Why would Obama take such a stance? It’s very simple. Votes. He knows that the military tends to vote Conservative. He also knows that people who get handouts from the government (such as welfare recipients and illegal immigrants that he allows to stay here) vote for Socialist candidates.

Obama insists we have no spending problem, but the vast majority of Americans disagree with this childish notion. In a recent poll 83% of Americans said they believe we have a serious spending problem; 14% agreed with Obama. In other words, six times as many Americans have brains as those who believe the president is correct. In the same poll, 73% said they believe the U.S. is heading in the wrong direction economically.

It’s good that so many Americans are beginning to see what has been so plain to so many of us for so long. The United States has spent more than it took in for 74 of the last 82 years. Indeed, we are in serious trouble.

But if we follow Obama’s convoluted thinking, we don’t have a spending problem. He believes we have a “revenue” problem (code for “We don’t tax the American people enough.”). So, in his warped view, we should impose more tax, but not cut any of the bloated government programs (except, of course, that it’s OK to decimate our military’s ability to protect us).

If we live by Obama’s philosophy, we will one day hear our grandchildren ask, “Tell us the story again of how America used to be the greatest nation on earth, Grandpa. Tell us about when we had freedom. Tell us what it was like before the rest of the world laughed at us. Tell us how it felt before China took over our nation.”