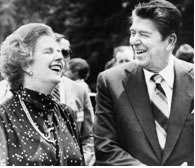 On the surface, Margaret Thatcher and Ronald Reagan were polar opposites. The “Iron Lady” was a cultured, refined and titled (she was a baroness) woman. The “Gipper” was a down-home California cowboy who was most comfortable riding a horse or fixing fences on his ranch. But when it came to their political philosophies they could have been identical twins.

Nancy Reagan called her husband and Thatcher "political soul mates." While they didn’t always agree on methods, the two world leaders shared a deep belief in freedom and conservative values. And they both detested communism in all its forms. In fact, while Reagan is often given the credit for the downfall of the Soviet Union, Margaret Thatcher played a very significant role in that dramatic historical event.

Margaret Thatcher passed away this week. She was an amazing woman. Ironically one of the best testaments to her strength and accomplishments is the hatred the socialist left in Great Britain nursed long after she left the political scene. Within hours after the announcement of her death, repulsive celebrations erupted in London, complete with champagne popping and cheers. The cretinous welfare bums even held signs reading “The Witch is Dead.”

If only they knew that the Iron Lady saved Great Britain from economic collapse, much as Reagan saved the United States. Mark Steyn wrote a great article (see LINK below) in Investors Business Daily titled “Thatcher Saved Britain from Socialism and Certain Decline.” As Steyn says, when Thatcher became Prime Minister everything that could be nationalized had been. And the unions owned the nation.

The top tax rate on income was 83%! Worse yet, the top rate on investments was 98%. There was little incentive to earn, and even less to invest. Like Reagan, Thatcher slashed taxes. She also privatized British air and British rail, as well as the numerous government monopolies of industry (such as coal and steel). And she put the unions in their place.

While her party’s allegiance was to conservatism, they were conservative in name only. At the time Thatcher took office the Conservative Party behaved almost as freehanded as their liberal opponents (much like the Republican Party in the U.S. today - which is nearly as liberal leaning as the Democrats). Thatcher dragged her party – and her nation – kicking and screaming to a system of government that was far more faithful to the British Constitution, and which emphasized economic initiatives that reversed the terrible unemployment of the time and freed business to help make the nation prosperous again.

The economies and foreign policy of Great Britain and the United States were fundamentally changed – for the better – by Thatcher and Reagan. They accomplished monumental things both individually in their respective nations and together as they led the world in the right direction.

In my mind, Margaret Thatcher was the female version of Ronald Reagan. This does not in any way detract from her unique personal greatness. I use this comparison because my readers know Ronald Reagan well, but few in this country got to know this powerful, principled woman as well as we got to know Reagan.

My prayer is that Great Britain will once again be great, and will be led by leaders like Margaret Thatcher. And while we’re on the subject, Lord, could you send the U.S. another Ronald Reagan?