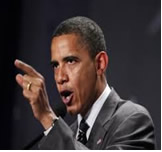 There is no question that the awesome power of the White House allows a president to have some impact on the culture of the nation. But when it comes to the bureaucrats who run the federal government, he creates the culture. In the case of our current president, the culture is one of intimidation. And every agency of the government understands this and obeys.

There are hundreds of examples of Obama administration bureaucrats intimidating honest, tax-paying citizens of the United States. The EPA springs to mind. And then there are the Department of Commerce, the Department of Education, the Department of Homeland Security, the TSA, Health and Human Resources – the list goes on. And don’t forget that Obama himself tried to intimidate the Supreme Court while it was considering the constitutionality of Obamacare.

For today I want to concentrate on the three specific examples of intimidation represented by the three big scandals of the week. I don’t want to talk about the scandals themselves – there has been enough commentary on those to fill several large books. I want to discuss how Obama has used the power of his position to unlawfully bully and terrorize the very citizens he swore an oath to protect.

Last week I wrote about the unconscionable way the Internal Revenue Service under Obama has intimidated patriotic organizations that did not share his political views. So I won’t dwell on this today. (See the LINK below to “Patriots are Bad People” for more on this.) Just remember that the key to this is the timing. In a nutshell, Obama used the IRS illegally and unconstitutionally to ensure his re-election.

The revelations about how Obama’s Justice Department perverted justice by intimidating reporters at the Associated Press is particularly disturbing. I am not a big fan of the AP, because I don’t consider them a neutral reporter of news. But I will defend to my last breath their right to report the news without being intimidated by the President of the United States.

Obama has a big thing about leaks – he really hates them. My guess is that they damage his arrogant assumption of omnipotence. But the Justice Department made the claim that a leak that one of their own made to someone at the AP “put Americans at risk.” That sounds better than, “The leak ticked off the president.” But it wasn’t true.

According to the Washington Post, the AP had been sitting on a scoop about a failed Al-Qaeda plot at the request of CIA officials for five days. The morning they were supposed to release the story, journalists were asked by government officials to wait another day, claiming “safety” concerns.

But the CIA officials who first cited the security concerns said they were no longer worried. Rather, the Obama administration was planning to announce the success of the counterterrorism project the following day, according to The Post. So Obama was upset because the AP broke the story and stole his glory. What a petty man we have in the White House.

I believe the AP’s statement. “We held that story until the government assured us that the national security concerns had passed,” AP President Gary Pruitt said in a written response to the Justice Department's claims. And Pruitt’s defense has been supported by other major news organizations. (For more see LINK below: “Some Question Whether AP Leak Put U.S. at Risk.”)

But let’s suppose for a moment that the goal was really national security and not intimidation of the press. There were only five people at the AP who were involved in the story. Why did the administration order the secret review of the business and personal phone calls of over 200 AP reporters? The only logical explanation is that Obama wanted to punish the AP for defying him.

Finally, Obama’s treatment of the Benghazi terrorist attack is the prime example of his use of power to intimidate. To understand what happened, you have to understand that his entire re-election effort depended on his self-created image of competence in the international arena.

Obama’s sole claim to expertise in international relations rested on this mantra: “I killed bin Laden and Al-Qaeda has been decimated. Of course, he did not kill Obama. The brave men of Seal Team Six did so; for him to claim credit is shameful. And to suggest that he did anything that any other president would not have done is ludicrous.

Of course, despite Obama’s claims, Al-Qaeda is still alive and well and killing Americans. But Obama was (and is) desperate to maintain the fiction that “Al-Qaeda is on the ropes,” because it’s all he has. So he tried desperately to blame it on a foolish homemade YouTube video. It couldn’t be terrorism. After all, Obama had killed bin Laden and decimated Al-Qaeda!

By the way, the poor idiot who made the video was arrested at the request of the federal government. Nothing about the video was illegal - it was just stupid. But because he became part of Obama’s cover story, he’s still in jail.

From the beginning of this scandal there have been dozens of State Department employees and others who were either in Benghazi or Tripoli during the events who wanted to share the truth. But they were ordered by the administration to keep quiet on pain of losing their jobs. Of course the justification was “national security.”

But now three brave whistle blowers have testified before Congress in defiance of Obama, and blown his version of events out of the water. Strangely they have not been arrested for national security violations. Could it be that the real reason they were muzzled was Obama security?

Before we finish, let’s look at some other examples of Muslim terrorism that Obama tried to characterize as something else. In the Fort Hood terrorism incident a Muslim extremist murdered 13 Americans while screaming “Allah Akbar!” Obama called it “workplace violence.” Because of his refusal to classify it as terrorism, many Army families are not getting the support and care they need. Army officials were intimidated by the White House. They were ordered not to use the word “terrorism” in relation to this, uh - terrorism.

More recently, Obama was quick to call the Boston Marathon bombing domestic violence. He likes domestic violence, because it plays well with his narrative that America is bad. In his weird world violent Muslims only do horrific things to America because we treat the rest of the world with “arrogance.” When it was revealed that the two brothers who set off the bombs were in fact Muslim extremists, the silence was deafening. The Obama White House used intimidation to advance their narrative and downplay the fact that it was actually international terrorism.

The bottom line is that if the truth about Obama had been known at the end of his first term, he probably would not have gotten a second term. After all, even Democrats have expressed outrage at the stories that have unfolded this week. So the truth had to be suppressed until after the election. A good case can be made that intimidation tipped the scales for Obama’s re-election.