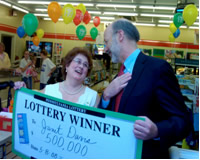 I have never bought a lottery ticket and I never will. This is because I do not believe the lies of the government. “But what about the $600 Million Powerball winner last week? That really happened!” Did it?

It goes downhill from there. $590 Million is the prize only if you agree to take payments over a period of 30 years. If you do that, inflation will eat up a huge amount of your money and you will end up with less real spendable dollars than if you had taken the lump sum payout. (And, by the way, if we experience Hyper-Inflation, which many experts are predicting will happen in the next few years, you will get essentially nothing.)

Well, what if the winner takes the lump sum payment? Not a bad idea in view of the likelihood of a dollar crash due to the huge national debt. (Did you know that before FDR took us off the Gold Standard in 1933 we were the greatest creditor nation that ever existed?  We loaned money to everyone. Today we are the greatest debtor nation that has ever existed – we owe money to everyone, even banana republics.)

The lump sum payout is $376 Million – 63% of the supposed prize. But the winner, who bought their ticket in Zephyrhills, Florida, won’t get that. The feds will first take close to $100 Million – 25% of the total. So the winner (We’ll call him or her Zephyr) will get $282 Million – 47%. It seems like the government, not Zephyr, is the bigger winner in this deal.

And if Zephyr had lived in New York instead of Florida, the state would have taken another 14% in taxes, leaving the winnings at $242 Million. That’s only 41% left over for the winner. The government wins even bigger in New York.

The biggest lottery winner of all is the U.S. federal government, which receives hundreds of millions of dollars every year in taxes on lottery winnings.

It gets worse for the lottery “winners,” as  90% of them burn through their winnings in five years. So statistically within 5 years Zephyr will be worse off financially than he or she was before the win. He will have quit his job, in many cases forfeiting his seniority and pension. She will have enjoyed fancy cars and high living for a few years. But ultimately Zephyr will probably end up broke, and will be trying to find a job in a tough job market.

If the whole scam is that bad, why do the governments of most states in the union push the lottery? Florida has an advertising campaign in which it talks about “The Dream” of winning the lottery. Florida Lottery Secretary Cynthia O’Connell says, “It’s a wonderful feeling to know that dreams come true for Floridians every day.”

Give me a break. The American Dream is working hard and earning what you get. This kind of government propaganda promotes what government wants: an entitlement mentality that produces people who depend on the government – and who will vote for the politicians who promise free stuff.

“But doesn’t the lottery support education?” Yes and no. Duke University professor Charles says in his book on state lotteries, “It’s very hard to say that these lottery dollars really make a difference. The net effect of earmarked education lottery revenue on education expenditures is close to zero,"

Money does go to education. But the nationwide average is only 25% of lottery ticket proceeds goes to education. And even that is misleading. Lottery money covers only a tiny percentage of the overall education budgets of the states. For instance, despite the billions collected by the California lottery, only 1.5% of the state’s education budget comes from the lottery commission.

A better question is, “Should the government be supporting education with a program that hurts millions of citizens, and is a horrible role model for the children it supposedly helps?

An even better question is, “Since the funds provided to education by the lottery are so insignificant, why do states promote lotteries that hurt their citizens?”

A mathematics professor gave this perspective: “If you bought 100 tickets a week since Jesus was born, there’s a better than even chance that you would not have won.”

“But how does that hurt people?” U.S. citizens are hurt by the false hope propagated by our government (whose job is to protect us, not to steal from us). I have counseled people who buy lottery tickets every week, whether or not they have enough money to properly feed and clothe their children. Buying lottery tickets is most prevalent among the poor – the ones who can least afford to waste money like this.

Florida is among the 27 states that spend millions pushing the lottery drug to poor people – and then funds websites like the Florida Council on Compulsive Gambling, which helps people break their lottery addictions. Where is the sense in that?

The Amazon blurb for “Selling Hope,” an economic research book on lotteries, reads “With its huge jackpots and heartwarming rags-to-riches stories, the lottery has become the hope and dream of millions of Americans - and the fastest-growing source of state revenue. Despite its popularity, however, there remains much controversy over whether this is an appropriate business for state government.”

Let’s face it. The lottery is gambling. And the government has no business promoting gambling and profiting from it. Gambling is condemned in the Bible. It is addictive. And it is an unconstitutional activity on the part of government.

PUBLISHER’S NOTE: Knowing that I would be on a teaching tour, I wrote this article a week in advance. So if the name of the Zephyrhills lottery winner has been announced by the time you read this, it had not been by the time I was on the road.