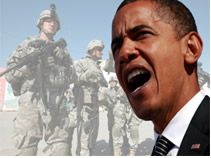 Speaking about the War on Terror last week, Obama said, "This war, like all wars, must end." Great idea, Obama. One small problem: The bad guys have no intention of quitting. If we quit fighting, they win. Period.

I could end this article with the first paragraph. But you know me. I like to put some flesh on the skeleton. So here goes…

Here is what Obama said about the War on Terror at the National Defense Institute: "This war, like all wars, must end. That's what history advises. That's what our democracy demands." He's dead wrong on both counts.

History advises that only fools and pacifists (interchangeable terms, by the way) allow aggressors to murder their citizens without retaliating. People like to quote the Bible to me to justify pacifism, since I'm a pastor. I just point them to how God directed ancient Israel when they were attacked. He didn't just tell them to defend themselves; He told Israel to kill all of them.

Obama claims that our democracy demands that we end the war on terror. I assume that he is speaking about the American people. (Obama still hasn't had time to read the Constitution, so he still thinks we are a democracy, not a Republic.) The last time I checked an overwhelming majority of Americans prefer fighting back over waiting helplessly until Muslim terrorists kill every last American.

Honestly, sometimes I can't tell whether Obama is hopelessly naïve or dangerously stupid. This is one of those times.

In the same speech he claimed that "the core of al Qaeda is on the path to defeat." This guy is the master of weasel words. Remember when he claimed that his $800 Billion stimulus had "created or saved" jobs? Even if not one single new job had been created, he could still claim to be right because of all the jobs that had been "saved." Since a saved job was one that already existed, and which he had not managed to destroy with his socialist policies, he would be right. I like Anne Coulter's response to his ridiculous words: "Obama created or saved the Grand Canyon."

So when he says "the core of al Qaeda is on the path to defeat," understand that these are a collection of weasel words. The "core" of al Qaeda? That could mean anything he wants it to mean. Lately he has been using the phrase to mean bin Laden and his closest lieutenants. Of course these guys are dead, making the claim inarguable, except for the dozens of al Qaeda sub-groups, and the hundreds of al Qaeda splinter groups that keep popping up.

Al Qaeda is "on the path to defeat" –  what does that even mean? Were this true, it would stand to reason, then, that almost anyone and any group is "on the path to defeat" if they are losing even a little ground. If they come out of a slump and manage to pull off a few successes, by his reasoning they are "on the path to victory!" I don't care what "path" these murderous thugs are on – I want to see them crushed. But apparently Obama doesn't see it the way I do – or the way most Americans see it.

And, by the way: If al Qaeda is "on the run" (as Obama has repeatedly said) who directed the attacks in Benghazi, the Boston Marathon bombings, and the dozens of lesser-known terrorist attacks of the past few months? Perhaps Mr. Obama can call the families of the Americans who died in these attacks, and comfort them with his fantasy of an al Qaeda that has been "crushed" by his exemplary leadership.

Fortunately, Obama has a plan to end the War on Terror. He said he wants to amend or repeal the 2001 Authorization for Use of Military Force. This is the law that funds the War on Terror. His brilliant plan is to "take America off its permanent war footing" by cutting off the funding for the war. Makes sense. If we can't afford to fight, the War on Terror will be over. One small problem: The terrorists will have won.

Legendary Marine General James "Mad Dog" Mattis once said, "No war is over until the enemy says it's over. We may think it over, we may declare it over, but in fact, the enemy gets a vote."

So here is some solid, conservative truth for Obama: It takes two to end a war – one winner and one loser. This war, like all wars, will end only when we win it.