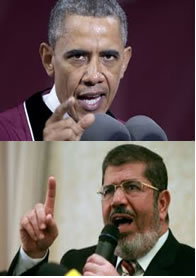 A politician was asked how he stood on a particular, rather contentious, issue. His reply: "Some of my friends are for it and some are against it. I want to make my position perfectly clear. I stand with my friends." This sounds a lot like Obama's statements regarding the ouster of his terrorist buddy, Mohammed Morsi.

After taking far too long to comment, he finally said, "The United States is deeply concerned by the decision of the Egyptian Armed Forces to remove President Morsi and suspend the Egyptian constitution."

When I heard that I felt like saying, "Speak for yourself, Buddy. That's not the way most Americans feel. They're glad the terrorist is gone."

In the "talking out of both sides of his mouth" segment, Obama said "The voices of all those who have protested peacefully must be heard – including those who welcomed today's developments, and those who have supported President Morsi." So the military is supposed to take its marching orders from the supporters of the repressive Islamist dictatorship that they have just overthrown? Obama is so naïve it is painful to watch.

He went on to say "The United States does not support particular individuals or political parties, but we are committed to the democratic process and respect for the rule of law. Since the current unrest in Egypt began, we have called on all parties to work together to address the legitimate grievances of the Egyptian people, in accordance with the democratic process."

Pretty words. But they conflict with reality. When Morsi (the candidate of the Muslim Brotherhood) was elected, Obama was among the first to congratulate and praise him. So much for not supporting particular individuals.

Zuhdi Jasser is a Muslim and a medical doctor. He served as a Lt. Commander in the U.S. Navy. He is the founder and president of the American Islamic Forum for Democracy. Dr. Jasser regularly briefs members of the House and Senate Congressional anti-terror caucuses on the threat of political Islam. He is an internationally recognized expert on the dangers of militant Islam.

Jasser had the courage to make this statement in a recent national television interview: "The Muslim Brotherhood of Egypt created Hamas, Al Qaeda, and almost every other radical Muslim group in the world."

Obama helped set the stage for the elevation of this terrorist organization to power. He pulled the rug out from under Egyptian President Hosni Mubarak, saying repeatedly, "Mubarak must go!" Demonstrating his great foreign policy expertise, he helped topple one government without having a clue as to what would replace it.

It's not that Mubarak was a saint. He wasn't. But during his almost three decades as president of Egypt he helped keep the region stable; he helped ensure the safety of Israel; and he worked closely with United States on many matters that were important to us as a nation.

Israel is our most important (some would say our only) ally in the Middle East. Mohammed Morsi, Obama's buddy, has referred to them as "the descendants of apes and pigs," the worst insult imaginable. Quite a statesman.

I see a lot of parallels to the ouster of Cuba's Colonel Fulgencio Batista in 1959. Yes, Batista was a dictator. But he was a largely benign dictator. The country was relatively safe and prosperous under his rule. Havana was a resort town visited by many American tourists, including politicians. After Batista was replaced by Fidel Castro everything changed. No one was safe, and only Castro and the Communist Party elites were prosperous. By the way, the U.S. helped put Batista in power, just as Obama helped put Morsi in power.

Egypt was no paradise under Mubarak. But in the 368 days that the terrorist Muslim brotherhood ruled Egypt through Mohammed Morsi, violent crime increased by several hundred percent and the economy collapsed. Today over 50% of Egyptians live on less than two dollars a day.

Cuba never got a chance for redo. After foolishly supporting the charismatic Castro, Cubans were stuck with him for decades. When he got sick, his brother Raul (who is even more of a Communist than Castro) took over. Thanks to the Egyptian military, Egypt now has a second chance to get right.

Obama is upset because the military "suspended the Constitution" and he is calling on them to allow the "democratic process" to play out. There are a couple of problems with that. First, Egypt's current Constitution was hastily thrown together in a two-week period during December of 2012. By contrast, the United States did not have a Constitution until eight years after our revolution.

Second, the problem with Obama's call for Egypt to follow the "democratic process" is that Egypt has none. They replaced one dictator with another. What they need to do now is take some time to figure out what a "democratic process" means for them. They need to take some time to write a real Constitution. The Egyptian military, the only stable and trusted institution in the country, is giving Egypt a chance to do both.

In a column published in Foreign Policy magazine shortly before the overthrow, Texas Republican Senator Ted Cruz accused Obama of staying on the "sidelines" during the recent protests.

"In what has to be one of the most stunning diplomatic failures in recent memory, the United States is - in both perception and reality - entrenched as the partner of a repressive, Islamist regime and the enemy of the secular, pro-democracy opposition."

Here's a question for Obama: "How do you feel about helping topple an ally of the United States, and supporting a terrorist dictator?"