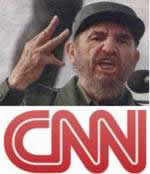 Why does the world need Conservative Truth, "The Antidote to the Liberal News Media"? Because organizations like CNN (the Communist News Network) exist seemingly for the sole purpose of pushing the international socialist agenda. Because CNN, along with most of the major media, twists and distorts the news in favor of monsters like Fidel Castro. And because these media think it is their right to push their liberal agenda on unsuspecting Americans who naively think they are watching the news.

The world got a dose of reality this week when a memo from CNN executive Allison Flexner was leaked. The subject of the memo? "Castro Guidance." Castro has long been the darling of the liberal news media and other America bashers. Ms. Flexner wanted to make sure that CNN personnel did not speak disrespectfully of their hero.

The memo was sent to the CNN Superdesk. Its purpose was to provide "Some points on Castro - for adding to our anchor reads/reporting."

The memo makes for very interesting reading. It shows how far CNN will go to promote a socialist agenda, while suppressing facts. And it makes you wonder how many similar memos are floating around NBC, CBS, ABC, the New York Times and other ultra-liberal "news" organizations.

Let's look at some of Ms. Flexner's orders to the troops. "Please say in our reporting that Castro stepped down in a letter he wrote to Granma (the communist party daily), as opposed to 'in a letter attributed to Fidel Castro'. We have no reason to doubt he wrote his resignation letter."

Note that, contrary to CNN's protestations that they do not censor their reporters, that Flexner is telling the reporters exactly what they are to say (the word "please" notwithstanding). Responsible reporters had noted that there is no evidence that the ailing Castro actually wrote the letter, and properly reported that the letter had been attributed to Castro. In her memo Allison makes sure that CNN reporters will not make the mistake of being objective. They are told in no uncertain terms to toe the party line (in this case the Communist party line that Castro has willingly resigned). That may or may not be true, but CNN doesn't know whether it is or not any more than you or I. They just choose to believe what the Commies tell them to believe, and they pass it on to us as fact.

She goes on, "Please note Fidel did bring social reforms to Cuba - namely free education and universal health care, and racial integration, in addition to being criticized for oppressing human rights and freedom of speech." Really? My wife, who was born in Cuba, tells me that free education was available in Cuba long before Castro's "revolution" (which was really just a bloody swap of one relatively benign dictator for another, far more vicious dictator). In addition, her family paid a monthly fee to a local clinic, which provided all health care for the family, long before Castro took over.

It is not difficult in a slave state to have "free" education and health care. In fact, it is a necessity, since the average Cuban makes less than $20 per month. But the fact is that Cuban education is more Communist indoctrination than anything we would call education. And the health care system is primitive - only slightly better than one would see in most African nations.

And racial integration? That's a laugh! Castro's white-boys-only government alone should be enough to show that for the lie it is. If not, listen to the words of Eldridge Cleaver after he spent some time in Cuba: "The white racist Cuban dictatorship is more insidious and dangerous for black people than is the white racist regime of South Africa, because no black person has illusions about the intentions of the Afrikaners, but many black people consider Fidel Castro to be a right-on white brother. Nothing could be further from the truth."

Why is CNN so obsessed with casting Castro in the best possible light? No country in the world (except for the other four remaining Communist nations) looks as favorably on this bloody butcher as does CNN.

Flexner's most telling statement shows what a socialist she really is. "While despised by some, he is seen as a revolutionary hero, especially with leftist in Latin America, for standing up to the United States."

"Despised by some"? Try, "Despised by every decent person in the world who can read and has half a brain." Then she has the nerve to say that he is "seen as a revolutionary hero" by "leftist in Latin America." Saddam Hussein was "seen as a revolutionary hero" by murderous Muslim terrorists, but that doesn't make him someone the news media should worship as she seems to worship Castro.

Finally, she mentions that he "stood up to the United States." Allison, Allison. Where did you go to school? Have you ever studied history? Do you ever watch any news coverage besides the biased reporting on your own network?

The only way Castro ever "stood up to the United States" was in his four to five hours rants against our nation. Castro called them speeches. He spoke to his admirers (who had to either attend or go to jail) for hour after rambling hour, many of who fainted as they stood there in the hot sun. If screaming for hours about what terrible "imperialists" Americans are qualifies, then I guess Castro "stood up to America."

This memo comes as no surprise. Anyone who has the stomach to watch CNN can almost see the strings by which the puppets they call reporters are moved about. The only surprise is that they weren't more careful to protect such damning evidence of their bias.

CNN Tells Journalists to Be Kind to Castro
http://amerpundit.com/2008/02/19/cnn-tells-journalists-to-be-kind-to-castro/