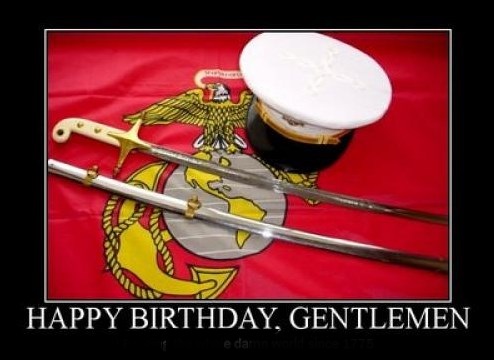 Yesterday was the 238th birthday of the finest fighting force that this planet has ever seen. The US Marine Corps was founded by the Continental Congress to fight for our independence eight months before the Declaration of Independence was published. The Marine Corps birthday was November 10, 1775. Happy Birthday, Gentlemen (and Ladies)!

Today is Veteran’s Day. While I certainly honor the service of all branches of our military on this day, the Marines hold a special place in my heart. I joined the Marines Corps during the Viet Nam War, right after I graduated from high school. And though I never served in a forward combat area, as so many brave men did, I still feel a special kinship with every Marine I meet.

This is something unique to Marines. You will often hear people say, “I used to be in the Air Force,” or “I served in the Navy.” Marines, even if they were discharged decades ago, always say, “I’m a Marine.”

When I meet someone who says he served in another branch of the military, I will often joke, “What was the matter? Couldn’t get in the Marines?” Marines aren’t arrogant; we’re just – proud!

“The Few. The Proud. The Marines.” What’s that about? It’s much more than a recruiting slogan.

Perhaps you have heard about The Title. Here’s how it goes. “The Title. It cannot be inherited. Nor can it ever be purchased. No one can buy it for any price. It is impossible to rent, and it cannot be lent. You alone and our own have earned it with your sweat, blood and lives. You own it forever. The Title: United States Marine!”

I have never met anyone who disputes the fact that Marine Corps basic training is the toughest of any of our branches of service. I never went through anything more difficult. I would never want to go through it again. But I wouldn’t trade anything for the experience.

“We will be first on the scene, first to help, and first to fight. For this, we have earned the reputation as ‘America’s 911 Force’ our nation’s first line of defense.”

This is by Congressional mandate: “The Marine Corps must be the most ready when the nation is generally least ready…to provide a balanced force in readiness for a naval campaign and, at the same time, a ground and air striking force ready to suppress or contain international disturbances short of large-scale war.”

Other branches of the military have elite Special Forces, such as Delta Force and the SEALs, who are awesome. They can respond quickly with amazing skill and courage. But the Marine Corps is the fast response force of the entire nation’s military. Marines can respond and defend our nation much more quickly that their larger and more cumbersome counterparts.

The link below – “Six Hours” – shows how a Marine Expeditionary Unit (MEU) plans, activates and responds to an urgent mission within six hours of receiving its orders. That is extraordinary. But then, Marines are extraordinary.

It is our Veterans, not our preachers, who have secured our freedom of religion.

It is our Veterans, not our reporters, who have secured our freedom of the press.

It is our Veterans, not our orators, who have secured our freedom of speech.

It is our Veterans, not our campus organizers, who have secured our freedom to assemble.

It is our Veterans, not our lawyers, who have secured our right to a fair trial.

It is our Veterans, not our politicians, who have secured our right to vote.

Take the time to thank a veteran or an active duty service member today.

History and Heritage of the Marines
http://www.marines.com/history-heritage