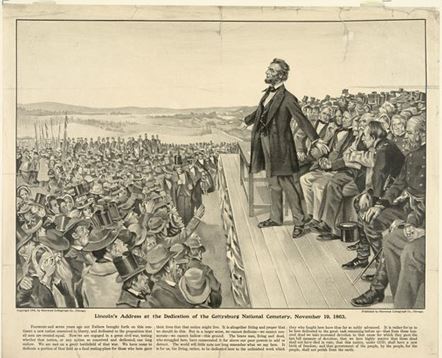 Today’s politicians would do well to take a page from President Lincoln’s book. When it comes to communicating powerful ideas, less can be more.

One hundred fifty years ago, on November 19, 1863, Lincoln said in his Gettysburg Address, “The world will little note, nor long remember what we say here.” He could not have known then that this short speech would become known as one of the world’s best, and would be so often quoted.

How could a speech of 278 words that lasted less than two minutes have made such a great impact on our nation, both then and now?

I think its very brevity was a major reason for its lasting impact. In Bible college my professors said that it was harder to preach a short sermon than a long one. My life experience has confirmed that. If I have a long time to speak, I can take my time getting to the meat of the subject. If I have less time available I have to think hard and work harder to cover everything that is important in the allotted time.

Abraham Lincoln was a master of the lost art of the quotable speech. No president since Kennedy has possessed this oratorical skill. Even my favorite president, Ronald Reagan, failed to captivate his audiences in the way that Lincoln, Kennedy and many other presidents did.

Modern presidents seem to prefer the “Aw, shucks,” folksy man-of-the-people approach. I suppose they think that people will connect better with them when they speak colloquially. But I believe that we as a people yearn for leaders who inspire us, possibly even awe us on occasion. Lincoln’s Gettysburg Address certainly did this.

Before giving you the text of the speech, allow me to give you a little perspective...

The speech was of course given at Gettysburg Pennsylvania, the occasion being the dedication of what is known today as the Soldiers’ National Cemetery. It was delivered four months after Union forces defeated the Confederacy at the battle of Gettysburg. This battle was considered the turning point of the Civil War.

A politician named Edward Everett gave a two-hour speech about the war just before Lincoln spoke. Everett later wrote to the president that his speech did not compare to Lincoln's two-minute speech.

He began his speech with these words, "Four score and seven years ago…" Most kids today know at least these words from the speech, even if they think a "score" is something from sports. Of course, you know that a score refers to 20 years.

Most historians believe this is a reference to Psalm 90:10 - "The days of our years are threescore years and 10. And if by reason of strength they be fourscore years, yet is their strength labor and sorrow; for it is soon cut off, and we fly away."

In that time people knew their Bibles, and would've understood this verse refers to the human lifespan. Lincoln was reminding his audience that the United States was only 87 years old. He seems to have been worried that the nation might not survive much longer than a human would.

He goes on to say that, "All men are created equal." This was smart. Everyone knew that he was talking about slavery. But the phrase could just as easily be interpreted as an allusion to the principles the founders set forth in the Declaration of Independence.

Later he says, "This nation, under God, shall have a new birth of freedom." Liberals, who seem to hate any reference to God, contend that the words “under God" were not spoken by Lincoln, because one copy of the speech does not contain them. There are only five copies of the speech, all of them handwritten by Lincoln himself. Since he included the words in four of the five copies, it seems obvious that the omission in one copy was a mistake.

One of the most memorable phrases of the Address comes close to the end: "Government of the people, by the people, for the people." Powerful words spoken by a great man. But he didn’t write them.

Lincoln did not have a speechwriter. But he did have great orators that he paraphrased. This phrase can be traced back to Daniel Webster, who used the words, "The people's government, made for the people, made by the people, and answerable to the people."

Lincoln's genius was using familiar yet powerful words to strengthen his premise. And since people tend to remember the first and the last words of the speech, it certainly didn't hurt that he used these weighty words at the end of his Address.

Other than the Sermon on the Mount, one would be hard pressed to find a better known, more memorable speech, at least in this nation. Lincoln’s words still possess great power after 150 years; and I have no doubt they will continue to impact Americans for centuries to come.

I will let President Abraham Lincoln – “Honest Abe” – have the final word today. Here is the full text of the Gettysburg Address…

“Four score and seven years ago our fathers brought forth on this continent, a new nation, conceived in Liberty, and dedicated to the proposition that all men are created equal.

“Now we are engaged in a great civil war, testing whether that nation, or any nation so conceived and so dedicated, can long endure. We are met on a great battle-field of that war. We have come to dedicate a portion of that field, as a final resting-place for those who here gave their lives that that nation might live. It is altogether fitting and proper that we should do this.

“But, in a larger sense, we can not dedicate - we cannot consecrate - we can not hallow - this ground. The brave men, living and dead, who struggled here, have consecrated it, far above our poor power to add or detract. The world will little note, nor long remember what we say here, but it can never forget what they did here. It is for us the living, rather, to be dedicated here to the unfinished work which they who fought here have thus far so nobly advanced. It is rather for us to be here dedicated to the great task remaining before us - that from these honored dead we take increased devotion to that cause for which they gave the last full measure of devotion - that we here highly resolve that these dead shall not have died in vain - that this nation, under God, shall have a new birth of freedom - and that government of the people, by the people, for the people, shall not perish from the earth.”