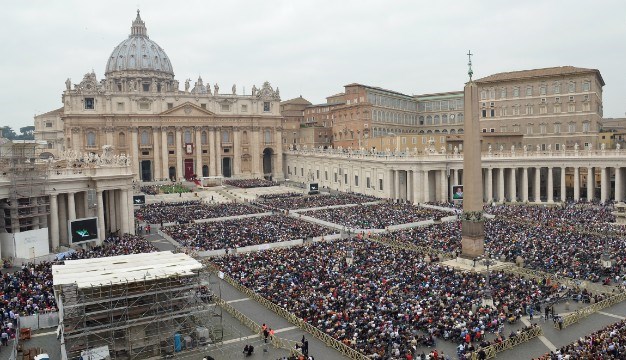 Obama spent $3 Million re-decorating the Oval Office when he moved in. But on Thanksgiving (great timing) he claimed that he can save the US $1 Million by insulting Catholics worldwide.

Let’s look at this.

The $3 Million was not spent redecorating the entire White House. That figure was only for the Oval Office. We’ve all seen photos of the Oval Office in George Bush’s last week in office. Did it look shabby to you? No, the reason given was that it needed to be redecorated to accommodate the “personal tastes” of the new president.

I have been the CEO of several corporations over the years. I have never asked for a budget to redecorate my office when I moved in. But then, I am not a prima donna.

Contrast that wasteful $3 Million with the $1 Million the U.S. will supposedly save if we insult Catholics by closing the US Embassy at Vatican City. I say “supposedly” because of the White House claims that the security savings are disputed by security experts. Some say that security costs will increase because of the additional distance our diplomats will have to travel to reach the new location.

The irony is that, just like the Oval Office, there is no problem with the current Embassy’s security system. It has been described by security experts as “state-of-the art.” Even the State Department used this description – until the White House decided to shut it down. Then suddenly it was in dire need of expensive upgrades.

The White House says it is not really closing its Embassy to the Vatican – it is simply moving it. That’s strange, because once they move our people and their equipment out of it, it will indeed be empty – and closed. Not surprisingly, the Liberal media have rushed to Obama’s defense, echoing the White House’s party line.

The plan is to combine it with our Embassy to Italy (which is located in Rome) because it is nearby. Imagine if we told the French and the Germans that we were going to combine our Embassies to their nations into one – in one or the other of those nations. Do you think the nation that lost their Embassy would feel slighted? Do you think they would feel that we didn’t value them? Or would they say, “That’s fine – the Embassy is still close by”?

But fortunately for the Vatican my personal opinion does not matter. The fact is that since the time of Christ most nations have informally recognized the Holy See as a Sovereign nation. And since 1929 that recognition has been formalized by numerous treaties. The United Nations and almost every civilized nation on earth respect the Sovereignty of the Vatican.

“But it’s so small.” So is Bermuda. So is Luxembourg. In fact, the population of Bermuda is one fifth that of the city where I live. And Luxembourg is half the size of tiny Rhode Island (even though the U.S. Ambassador to Luxembourg – who bought her position by donating $500,000 to Obama’s campaign – inanely claimed they are the same size).

As to the security concerns, I seem to remember an Embassy that had REAL security concerns a year or so ago. In fact the Ambassador BEGGED Obama’s State Department for enhanced security. I don’t remember the White House closing or moving that Embassy – or giving it the increased security assets the Ambassador requested. In fact, Obama REMOVED about half of the troops that had been guarding our diplomatic missions.

As a result, US Ambassador Chris Stephens and three other patriots died in Benghazi, Libya. And today the White House is still refusing to allow the survivors of the attack to testify before Congress about what really happened there. In fact, six months following the attack, many of them were required to sign new secrecy agreements, citing national security. But this is not an issue of national security; it is an issue of a president embarrassed by his own ineptitude and his refusal to send help to save the lives of these four men.

So the Vatican Embassy security smokescreen is not credible to me – or to anyone who has studied this matter.

In the words of James Nicholson, the former U.S. Ambassador to the Vatican: ”It’s a 'massive downgrade' of U.S.-Vatican ties. “It’s turning this embassy into a stepchild of the embassy to Italy. The Holy See is a pivot point for international affairs and a major listening post for the United States. It’s an insult to American Catholics and to the Vatican.” His views are echoed by four other former U.S. Ambassadors to the Vatican: Francis Rooney, Mary Ann Glendon, Raymond Flynn and Thomas Melady. These ambassadors were appointed by both Democrats and Republicans.

Ambassador Flynn said, “It’s not just those who bomb churches and kill Catholics in the Middle East who are our antagonists, but it’s also those who restrict our religious freedoms and want to close down our embassy to the Holy See,” he said in the National Catholic Reporter. “There is no diplomatic or political benefit to the United States from the relocation at all.”

Liberals say, “The current Vatican Ambassador likes the closure.” What would you expect him to say? He serves at the pleasure of the president. If he agreed with all these former Ambassadors, Obama would have him on the next flight home.

Former Florida Gov. Jeb Bush criticized Obama for closing the U.S. embassy to the Vatican, questioning whether the decision was political "retribution" for Catholic opposition to the Affordable Care Act.

I think he hit it right on the head. Obama has always exhibited antipathy toward every religion (except, of course, Islam). His war on religion has taken many forms, from trying to force religious institutions to hire homosexuals for ministry positions to forcing Christians to pay for other people’s abortions.

Yes, he seems intent on ruining international relations with many non-Socialist nations. But I believe this is more than inept foreign politics or his desire to push Socialist ideology worldwide.

Just like his hurtful actions toward Israel, Obama’s move against the Vatican clearly demonstrates his antagonism toward religion in general.

Obama’s call to close Vatican embassy is ‘slap in the face’ to Roman Catholics
http://www.washingtontimes.com/news/2013/nov/26/obamas-call-close-holy-see-embassy-slap-face-catho/