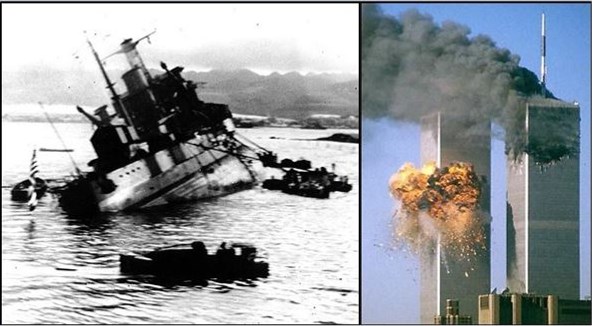 Within hours of the attacks on 9/11 many writers – including me – were comparing the attacks by Islamists against the US to the slaughter of US citizens at Pearl Harbor, Hawaii by the Japanese. And with good reason.

Both of these attacks killed thousands of civilians and military personnel. Both were cowardly surprise attacks carried out by hate-filled zealots who don’t deserve to be called human beings. And both occurred because we as a nation ignored warnings signs.

I don’t want to spend much time on the history of these two events, because most know it well. I want to focus on what we can do to prevent harm to our country in the future.

I will simply state that anyone who is so inclined can find ample evidence of the warnings we received about both the possibility, and later the inevitability of the attack by the Japanese at Pearl Harbor. The actual terrorist attacks by Muslim murderers on the USS Cole, the Marine Barracks in Lebanon, and the first attack on the Towers themselves should have served to put us in a position to prevent or at least abort the attacks on 9/11.

I believe a Socialist/Marxist takeover of the United States is a far greater danger than any of the others described above. “Wait! That doesn’t make sense, Tom. How could even such a radical change to our political system be worse than being attacked?” Simply because if the Socialists and Communists achieve their goals, they will degrade our ability to defend ourselves so much that physical attacks will be inevitable.

Read the website of the Communist Party USA (see LINK below) and listen to General Jerry Boykin’s video taught in May on the Christian Financial Concepts Webinar (see LINKS below). If you do this basic research, it will quickly become clear that Socialists and Communists – both within and outside of America – have a clear plan to destroy our country. And it does not involve physical attacks. It involves weakening us spiritually, socially, morally and politically to the point where we can offer no resistance.

What is the difference between Socialists like Barack Obama, and outright Communists like his parents and mentors? Very little. Both Socialist Parties and Communist Parties of nations around the world are members of the Socialist International (see LINK below), an umbrella organization that coordinates the activities of organizations which are dedicated to a one-world totalitarian government.

I strongly recommend Cleon Skousen’s book, The Naked Communist. Skousen, a former FBI agent, is a Biblically-oriented, conservative political author (my kind of guy). After extensive research, he was able to discover 45 goals that Communists hope to accomplish in the United States (see LINK to this list below). Sadly, they have already accomplished many of them. Here are just a few. Make sure you read the entire list.


These are only six of the forty-five goals. For the sake of your children and the nation, read all forty-five, listen to General Boykin’s Webinar, and read The Naked Communist. None of these will fill you with joy. But the Bible makes it clear that when we go to battle, we should know our enemy. And there is no doubt that we are in a battle.

Members of the Socialist International (including the Democratic Socialists of America)
http://www.socialistinternational.org/viewArticle.cfm?ArticlePageID=931