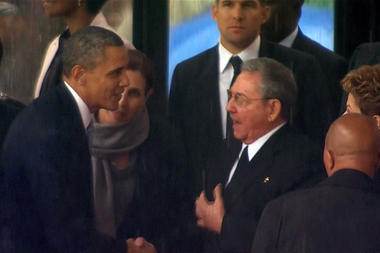 I don’t get it. Obama seems to look for ways to insult our allies, including Israel and Great Britain. But he bowed before the Muslim King Abdullah of Saudi Arabia. He went out of his way to greet mass murderer Hugo Chavez of Venezuela. And this week he shook hands with two bloody dictators – Raul Castro of Cuba and Robert Mugabe of Zimbabwe.

His rudeness to the Queen of England and the Prime Minister of Israel are yesterday’s news, as is his obsequious behavior toward Abdullah and Chavez. Today I want to focus on his recent love fest with two brutal dictators at Nelson Mandela’s funeral.

Who is Raul Castro? Basically he is an extension of his better-known brother, Fidel. While Fidel Castro was busy murdering, torturing and imprisoning his countrymen, Raul was his right hand man and headed the armed forces. He just wasn’t in the spotlight as much as Fidel was.

Many Cubans both on the island and here in the U.S. hoped that things would change when Fidel passed the reins to Raul. They hoped he would be more moderate. He indicated as much, but that was akin to Obama saying his administration would be friendly to business. Raul has changed nothing of substance. He is just as brutal as his brother. He just smiles more.

Robert Mugabe is known as “The Elected Dictator.”  He became the first president of Zimbabwe (formerly known as Rhodesia) through a fraudulent election characterized by intimidation and ballot-box stuffing.

Mugabe murdered white Zimbabweans and stole the lands they had farmed for generations. A black Catholic Archbishop who fled his brutal repression called Mugabe the most racist dictator of our time. His “security forces” murdered over 20,000 black Zimbabweans who opposed his dictatorship. And Mugabe bragged that he was “The Hitler of our time.” Good choice, Obama.

What difference does it make who our president bows down to, shakes hands with, or rudely snubs? Don’t the actions our nation takes, diplomatically, militarily or with foreign aid mean more? Yes, to diplomats and politicians. But the symbolism of a president’s actions speaks more loudly to average people worldwide, who often don’t pay much attention to diplomatic activities.

Let’s take two funerals as examples. Obama attended Nelson Mandela’s funeral this week. As we mentioned last week on www.ConservativeTruth.org, when he became president of South Africa, Mandela kept the nation from degenerating into civil war. But he was an admitted Communist, and he spent several decades in prison for murder and terrorism.

But Obama snubbed England by refusing to attend Margaret Thatcher’s funeral. Thatcher was not a Communist, and to my knowledge she never murdered anyone. But she was a strong ally of the United States and she was instrumental in helping Ronald Reagan tear down the Iron Curtain.

I would say Obama’s choice of which funerals he attends is interesting, to say the least.

By the way, not only did Obama refuse to attend Margaret Thatcher’s funeral, he also refused to send a single high-ranking official, which was a slap in the face to one of our most important allies. But he sent a state department official and two U.S. Congressmen to Socialist dictator Hugo Chavez’s funeral.

I’m not saying that Obama approves of murderous dictators, Muslims, Socialists and Communists; or that he disapproves of Great Britain and the State of Israel. But his actions say these things. And the world is watching.