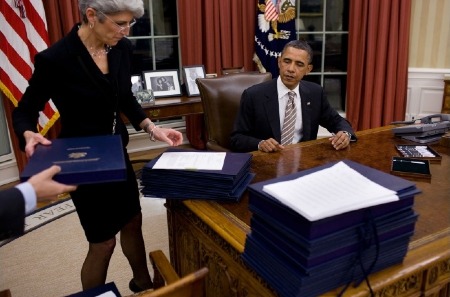 We hear people arguing about whether Obama has signed more Executive Orders than other presidents. It doesn’t matter. You have to remember that Obama is a lawyer, and that he has surrounded himself with people like himself – smart and devious. He came into the Oval Office knowing that Conservatives would be counting his Executive Orders. He also knew that he could bypass Congress and the Constitution by using other means, including Executive Actions and Signing Statements. And no one keeps count of them.

To understand all this, let’s start with an overview of Executive Orders. Specifically, where do they come from? First, they are neither authorized by the Constitution, nor defined in that document. Yet every president, starting with George Washington, has used them.

Originally Executive Orders were used for emergencies, when Congress could not act. In the early days of our nation, Congress met once a year for a few months. They were not career politicians such as we have today. Most were professionals or business owners who were elected because they knew how to get things done. They served their term, and then went back home to their businesses.

So what happens if a national emergency occurs when Congress was not in session? It could take weeks or - in the case of the Western legislators - months to notify Senators and Congressmen and then for them to get to Washington by coach or on horseback.

So it became traditional for presidents to issue orders which they knew Congress would accept. It was wise for them to be prudent with the orders they issued because they knew that Congress had the power to rescind Executive Orders through legislation.

Let me just take a moment and explain that while the founders designed our system of government with three separate branches, they never intended the branches to be "co-equal" as we so often hear today. You'll not find that concept in the Constitution or in any other of our founding documents.

The legislative branch was designed to have the most power. If a president becomes tyrannical, Congress has the power to reverse his decisions by legislation. Congress can also remove the president from office through impeachment. By the same token, if the Supreme Court decides to start creating laws, Congress has the power to enact legislation that can reverse unconstitutional decisions made by such activist courts.

The way things are supposed to work is that Congress passes laws and the executive branch, headed by the president, has the responsibility to implement those laws. That is the excuse that most presidents have used to justify improper use of Executive Orders. They typically claim that they are only clarifying the laws or creating rules to implement them, when in fact they often create new laws never envisioned by the legislative branch.

Besides Executive Orders, there are two other ways that Obama has in effect written laws that Congress never approved. These are called Executive Actions and Signing Statements. Keeping in mind that none of these are authorized by or defined in the Constitution, here are some commonly accepted definitions:

Executive Order: A rule or order issued by the president to the executive branch of the government and having the force of law.

Executive Action: This is a vague term that can refer to any action taken by the Executive (the president).

Signing Statement: A written pronouncement issued by the President of the United States upon the signing of a bill into law. They are usually printed along with the bill in United States Code Congressional and Administrative News.

Executive Orders cannot legally be used to enact laws that Congress refuses to pass. For example Congress has not been willing to raise the minimum wage because it will reduce the number of jobs for unskilled workers. So recently Obama took upon himself to do with the people's representatives have voted against. He ordered all federal contractors to increase their minimum wage by 50%. Please note that he did not increase the wages paid by the federal government. He put this illegal burden on the backs of private contractors who do business with the government.

Executive Actions (also known as Presidential Memoranda) have been used by Obama hundreds of times. Recently it was used to force doctors to violate federal privacy laws. He wants physicians to ask their patients if there are firearms in their home and report this information to the federal government. Obviously, this is an initial action that will help the government identify who has guns, which will make it easier for the US government to confiscate private guns as Australia recently did. By the way, violent crimes against persons have increased since Australia took the guns away from its law-abiding citizens.

Signing Statements are just as insidious. In 2006 the American Bar Association stated that the use of signing statements to modify the meaning of duly enacted laws serves to "undermine the rule of law and our Constitutional system of separation of powers." The Constitution does not authorize the president to issue Signing Statements when a law is sent to him. He has three options: He can do nothing; he can sign the bill; or he can veto it. Yet Obama has used Signing Statements on many occasions to change the intent of laws passed by Congress.

Of course we have constantly heard on the news about the 35 changes that Obama has made to the Obamacare Act. Some might say, "It's his bill. He pushed it through Congress. Why can't he change it?" Well, the fact is that even though we refer to the Affordable Care Act as Obamacare, is not his bill. Whether we like it or not, it was passed by Congress. And, as Obama has repeatedly said, it is the law of the land.

Presidents don't get to change laws whenever they feel like it. Only Congress can change a law passed by Congress. But for political reasons, for the express purpose of helping Democrats in the upcoming election, Obama has made these 35 changes to this very unpopular law.

Obamacare is so unpopular that no Democrat is running on this legislation that they used to brag about. Another indication that the law is not hated solely by the general population, but also by many Democrats, is that Democrats running for reelection are asking Obama to stay away from their campaigns. Normally, politicians of the same party as the president beg him to campaign for them. Instead, they're asking Bill Clinton for help. Obama has become toxic.

Most presidents have used the three methods of subverting Congress described above to one degree or another. Obama has made their use an art form. But he used to be against them before he was for them. Observe his huge flip-flop…

In 2008 Candidate Obama shouted, "The biggest problems we are facing right now has to do with George Bush trying to bring more power into the executive branch and not go through Congress at all! And that's what I intend to reverse when I'm president of the United States."

Six years later, in last month's State of the Union address, he spoke of the many ways he wants to radically change the United States. "Some require congressional action and I'm eager to work with all of you. But America does not stand still and neither will I. So wherever and whenever I can take steps without legislation that's what I'm going to do." Only Democrats clapped for this outrageous statement.

When he was running for president he said he realized how dangerous it was for one man to have enormous amounts of concentrated power. He told us he understood why our founding fathers strictly limited the power of the president; they didn't want a dictator in the White House.

Since he's been president, he has systematically expanded the power of the executive branch to the point where the framers of the Constitution would not even recognize it. He's been far more shrewd than any president who preceded him. He's been careful to limit the number of executive orders he has signed because he knows that that is the measure used by the uninformed to determine how much a president has abused his office.

Instead, he has used Executive Actions and Signing Statements to a far greater degree than other presidents. Among those of us who understand how Washington really works, he will always be known as the most tyrannical occupant of the Oval Office.

SOTU: Obama to Take Executive Action “Whenever, Wherever” He Can http://www.mrconservative.com/2014/01/31398-sotu-obama-to-take-executive-action-whenever-wherever-he-can/