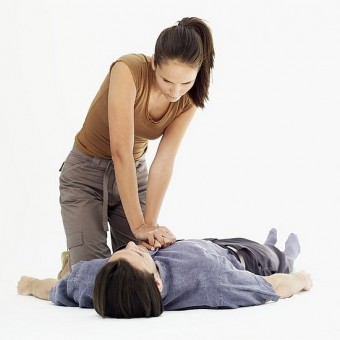 CPR has come a long way, baby. Now there’s even an app for that! (We’ll get to that in a few minutes.)

In ancient times I was a firefighter/paramedic, and I also served as a paramedic/deputy sheriff on our county Trauma-Hawk helicopter.

Along the way I taught EMT’s, paramedics, mountain rescue, and even did a stint teaching nurses at a community college. I was certified by both the Red Cross and the American Heart Association to teach CPR, and I certified or re-certified thousands of civilians and emergency personnel in this life-saving technique.

CPR has changed dramatically over the years. When I was a young Boy Scout we were taught to place drowning victims face-down, and pump their backs. The idea was to force the water out of their lungs by pushing down on their backs, and – as pressure was released between pushes – hope that air would be pulled into the lungs. Not too effective, but it was better than nothing.

Breathing into the mouths of drowning victims was first recommended by the Paris Academy of Sciences way back in 1740. But it wasn’t until 1957 that the US Military officially adopted it as a method for reviving unresponsive victims. In 1960, the forerunner of CPR (Cardiopulmonary Resuscitation) was developed by the American Heart Association.

The term refers to an attempt to revive both the heart (cardio) and the lungs (pulmonary). CPR has traditionally been performed three ways:
1)      A single rescuer alternating between heart compressions and mouth-to-mouth breathing (also known as rescue breathing).
2)      Two rescuers, one of whom does the heart compressions, and the other who does the mouth-to-mouth.
3)      Teams of professional rescuers, either in the field or in a clinical setting, with many types of sophisticated equipment to aid them in CPR. This is beyond the scope of this article.

For the single and dual citizen rescuers the standards have changed over the years. Standards ranged from five chest compressions followed by one breath; to the current ratio of 30 to 2. But there have been two major changes in recent years that dramatically altered the way citizen (bystander) rescuers perform CPR.

First is the use of AEDs - automated external defibrillators. It has long been known that CPR alone does not save many lives. Often CPR will keep enough oxygen going to the brain to keep the patient alive until rescue personnel arrive. But then a defibrillator is often used to get the heart beating on its own, and in a normal rhythm.

We've all seen defibrillators used on television. That's when a doctor or a paramedic grabs two charged paddles, yells, "Clear!" and then proceeds to attempt to shock the heart into a regular rhythm. Defibrillators on ambulances were used as far back as 1966 in Ireland, and have become standard equipment on most modern rescue vehicles. The problem with defibrillators is that are sophisticated machines that require a lot of training.

The AED is defibrillation for dummies. No one has to read an EKG. No one has to decide the level of charge that’s needed. You simply apply it and press the button. Every commercial airplane on which you fly has an AED. Most schools and many public places have AEDs in accessible locations.

The other change is a new recommendation that bystander rescuers use chest compressions only; no more mouth-to-mouth. And no, this is not for your protection. It's not to keep you, the rescuer, from getting germs from stranger’s lips. It's because compressions only have been shown to be more effective than the compressions plus rescue breathing that have been the standard for decades

Well, what good is it to circulate blood if the blood has no oxygen? First of all, the patient’s blood is already oxygenated to some extent, depending on how long he or she has been in arrest. Second, even when the heart is not beating, the brain is sending signals to the diaphragm to breathe. The gasping breaths that result are called agonal respirations. These provide some oxygen to the lungs that the rescuer’s chest compressions can circulate to the brain.

Not surprisingly, there are many websites where old-timers are challenging the new standards. "We've always done it this way!” Well, just about everything about emergency care has changed over the years, and in my opinion for the better. I remember when our rescue squad in North Carolina used the local funeral home’s hearse to transport patients to the hospital. And that's all we did - we transported them. Sure, we applied pressure to extreme bleeding, and occasionally used splints for broken limbs. But if someone was in cardiac arrest, we just loaded them up and drove fast.

(By the way, how would you feel if you had just been injured, and a funeral home hearse arrived to give you a ride?)

The latest studies show that fast chest compressions - preferably 100 per minute - are the best way for citizen rescuers to help until the professionals arrive. If an AED is available, so much the better.

Many of us who have studied the evolution of emergency care remember the Seattle experiment. Over a period of several years, the city and its emergency agencies put on a major push to train citizens in CPR. They did such a good job that it was almost impossible for a citizen in Seattle to be in a crowd of 10 people without at least one CPR trained rescuer in the group. Seattle's death rate from cardiac arrest was cut in half.

Now we get to the app I mentioned earlier. It’s called “PulsePoint - Enabling Citizen Superheroes.” It has the potential to be as revolutionary in saving lives as the Seattle experiment.

PulsePoint is an app (application) for Smart Phones that monitors emergency dispatches for cardiac arrests. Using GPS it locates people who have been trained in CPR and are within ¼ mile of the patient, and tells them not only where to go to help, but also whether there is an AED at or close to the location.

This program is in use in 17 states and 525 communities across the US. The largest community that uses it is Suffolk County, New York. Their Emergency Services Director says that the average response time to a medical emergency is 6 to 7 minutes. Their death rate from cardiac arrest has dropped because citizens paged by PulsePoint can often get to the victim much more quickly than the Paramedics.

1,000 Americans die of cardiac arrest every day. Many of those deaths are avoidable. Here's your action plan:

1)      Encourage your community to adopt PulsePoint.
2)      Do whatever you can to encourage the placement of AED's in public places.
3)      Get trained in CPR. If you are between 16 and 80 years of age, consider it your duty to take CPR training.

When I taught CPR, I always started off each class with this statement: "I want to compliment all of you for taking this class. You're going to spend your time learning a skill that you can never use to help yourself. You're doing what the Bible says to do - loving your neighbor as yourself."

CPR Does Not Require "Mouth to Mouth"
http://www.todayifoundout.com/index.php/2012/06/cpr-does-not-require-mouth-to-mouth/