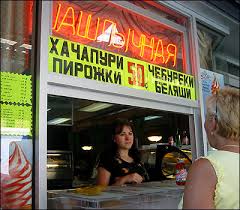 Based on the fact that the international community has offered virtually no resistance to Russia's invasion of Ukraine, Russia has decided to invade New York.

Vladimir Putin, former head of the KGB, pines for the time when Moscow controlled an entire empire known as the Union of Soviet Socialist Republics (USSR). But the real goal of the Communist party of Russia then was the same as that of all dictatorial empires: to control the entire world.

The supposed reason for Russia's invasion and occupation of Crimea was to assure the safety of Ukrainians there who speak Russian - who, by the way, were in no danger. Their real goal, of course, is to make Crimea, and eventually all of Ukraine, part of the Russian Empire again.

Russia's rationale for invading and occupying Brighton Beach (a Brooklyn seaside community known by its residents as “Little Russia”) will be to ensure the safety of New Yorkers there who speak Russian. Their real goal would be the same: the eventual takeover of the United States.

"Ridiculous!" you say. What would make Putin think that he could take over part of the United States without any repercussions? How about the fact that the United States and the rest of the world have allowed Russia to send armed troops to occupy Ukraine, and we have not lifted a finger?

A week from now the Crimea region of Ukraine will hold an election to determine whether they will stay part of Ukraine or join Russia. There are a few minor problems with this election:
1)      The election is totally unconstitutional under Ukraine’s Constitution.
2)      One week is not nearly enough time for both sides of the issue to present their arguments, and for the
people to make an informed decision.
3)      Armed Russian troops will be present at all polling places to ensure the result of this illegal election.

Remember with whom we're dealing. Vladimir Putin was not just a member of the infamous and vicious KGB (the Societ secret police, complete with death squads). He was the head of the KGB. He was "elected" president of Russia primarily because of the machinations and intimidation of other former KGB officers.

He served two terms as president of Russia, and since the Constitution did not allow him to run for a third term, he installed his puppet Dmitry Medvedev as President. Putin then became Prime Minister for one term, a largely ceremonial position. From that position he ran the country by pulling Medvedev’s strings until he could again become President.

Make no mistake. Putin is just as much a dictator as any of the Communist Party leaders who preceded him in his office. He has killed to stay in power in the past, and will not hesitate to do so again.

There have been many articles about the pitiful responses Obama and Europe have made to Russia’s armed aggression on Ukraine, so I won’t spend much time on this. Obama responded by withdrawing from the planning of a future conference with Russia. He also withheld visas from some Russians so their rich wives can’t shop at Macy's in New York. I’m sure these moves have paralyzed the murderous Putin with fear.

Vague talk of “economic sanctions” won’t do the job, when all Russia has to do is flip a switch and cut off most of Europe’s natural gas for heating. Threatening to remove Russia from the G8 would frighten Putin – but Obama is too scared to even talk about that.

The worst mistake Obama made, the mistake that proves that he knows less than nothing about foreign policy, is that he took the military option off the table even before his first conversation with Putin. Ultimately the last option in any negotiation where the lives of millions of people are at stake has to be at least the possibility of military intervention. Without that the rest of the “negotiations” are meaningless.

Imagine a New York cop comes upon a scene in which an armed criminal is holding three women at gunpoint in a store and the first thing the cop were to do is to lay down his gun and say, “Let’s talk about this.” I don’t care how they portray it on TV. I was a cop. That’s not the way it’s done in the real world. Our training officers told us that as soon as you lay down your gun, the hostages and the cop are as good as dead.

Anyway, back to our Obama-style cop scenario. After the cop lays down his gun (his only real leverage) he says, “Let the women go. I’ll let you keep the store, and I won’t stop the deliveries of Bud Light.” The criminal says, “I like that idea. But since I have a gun and you don’t, I’ll keep the women, too. I need a few extra wives. And hand over your badge and handcuffs; they might come in handy. And, by the way, kneel down so I can put a bullet in the back of your head – just because I can.”

Face it, folks. Our Commander-in-Chief is a coward. What's worse, he’s vain. He really thinks that by the force of his charm and personality he can talk the guy who already has the hostages and the guns into doing what we want. Meanwhile, our only leverage is the threat of taking away stuff that the murderous dictator doesn’t care about.

Let’s go back to Brighton Beach, New York - “Little Russia.” Like “Little Havana” in Miami, most residents there are US citizens or legal immigrants. But you could easily live and work there your whole life without knowing a word of English. The primary language spoken there is Russian. The signs of most businesses and offices are in Russian only. Many businesses employ only Russian speakers. Medical clinics and police stations have Russian interpreters.

There is nothing wrong with any of this. Many immigrant communities retain their identities in this way for several generations before being assimilated into the culture of their new homes. But there is also a danger involved. This isolation is the wedge that Russia is using to drive between Russian speaking Ukrainians and the nation where they are citizens.

When Russia first created the abomination known as the USSR they did so by intimidation, war, occupation – and colonization. They moved more and more Russian families into the nations they wanted to assimilate, and encouraged them to become citizens. Citizens of the occupied countries who protested were moved to Siberia – and never heard from again. Then, if intimidation, war, and occupation didn’t get the results they wanted, an election in which mostly ethnic Russians voted always did the job.

Friends, we are looking at the beginnings of “USSR – The Sequel.” If Obama and other Western leaders don’t quickly grow some spines, we could be looking at a Cold War – or worse – once again. Remember, we destroyed most of our nuclear weapons based on ridiculous treaties created by Liberal US presidents. The Communists were allowed to keep most of theirs.

Obama is in way over his head. Remember in the 2012 elections that Mitt Romney warned that Russia was again becoming our major geopolitical foe. Obama mocked him, saying, “The 1980s are calling to ask for their foreign policy back because, you know, the Cold War's been over for 20 years.” That’s not so funny now, is it, Obama?

Why Obama Got Russia Wrong (and Romney Got it Right)
http://www.slate.com/blogs/weigel/2014/03/03/why_obama_got_russia_wrong_and_romney_got_it_right.html

Use of the Russian Language in Brighton Beach, New York
http://www.nyuvoicesofnewyork.com/Communities/2001/russia.html

Formation of the Soviet Union
http://en.wikipedia.org/wiki/Soviet_Union


VISIT OUR WEBSITE at www.ConservativeTruth.org for daily updates of Conservative news, great commentary published weekly, and to view our archives.