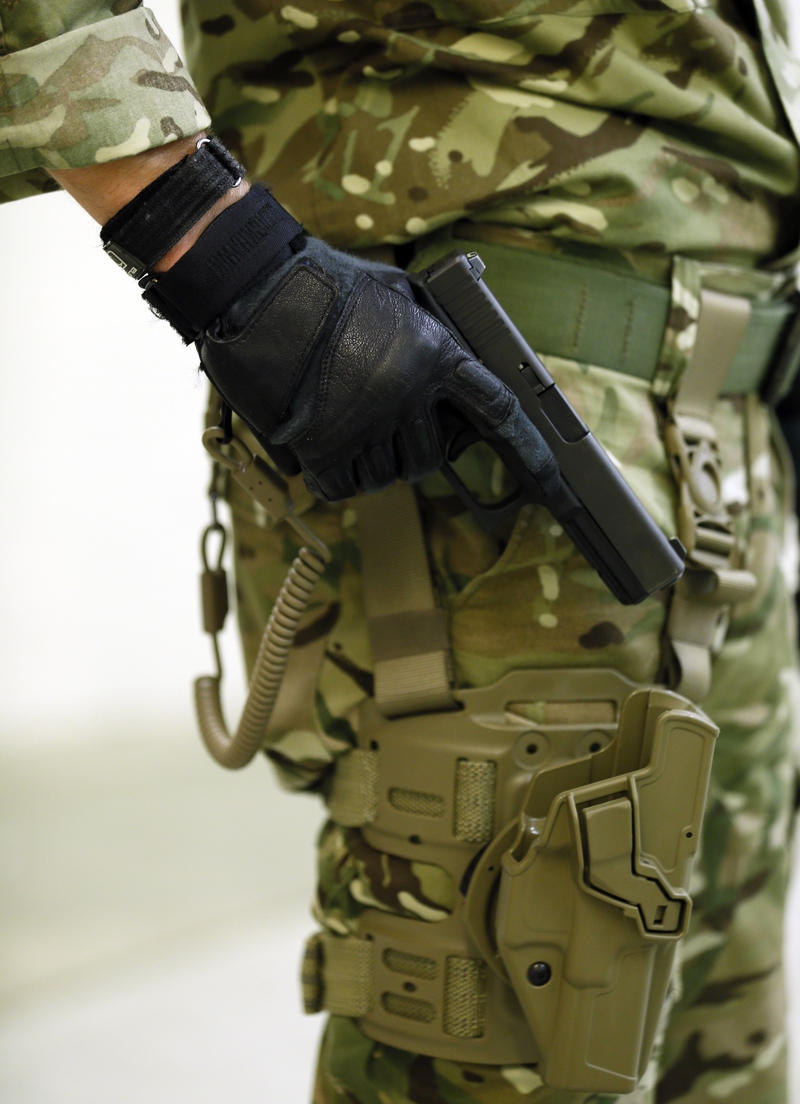 Four days after the first Fort Hood shooting, I wrote an article on this site titled, "Not a Terrorist Attack?" (See LINK below.) The first paragraph read:

"Less than an hour after a Muslim extremist soldier screamed ‘Allahu Akbar!’ (Allah is Great!) and killed or wounded more than 40 people at Fort Hood, Texas, the Army brass was rushing to assure America that the terrorist attack was "not a terrorist attack." Please tell me what about this carefully planned attack by a man who attended the same mosque as two of the 9/11 terrorists, would indicate to these spineless Army bureaucrats that this was anything BUT a terrorist attack?”

The military issued only smiling photos of the terrorist, Major Nidal Hasan, in full uniform. But I was able to obtain security footage of Hasan an hour before the shooting when he stopped at a convenience store for a drink. He was dressed in full Muslim garb including the flowing robe, worn over pants and a skull cap. As far as I know, www.ConservativeTruth.org is the only place this photo was published. The Army certainly didn’t acknowledge that he was not in uniform, but rather in his suicide clothing.

But this article is not about the first Fort Hood shooting. It’s really not even about the second shooting that took place a few days ago. It’s about what has been done since the first massacre to improve security – which is essentially - nothing.

Though Obama’s preposterous assertion that the terrorist attack in 2009 was “workplace violence” (which served to prevent the victims and their families from receiving Purple Hearts and military benefits that they deserved), it shouldn't have curtailed efforts on the part of the Army to take necessary steps to ensure that a massacre like this never take place again.

I was raised on Air Force bases, so the sight of military personnel carrying weapons on base was commonplace for me. When I was on active duty in the Marine Corps it was no different. So when the first Fort Hood shooting took place my immediate thought was, "Why did the soldiers have to wait for civilian rent-a-cops? Why didn't they take out this crazy Jihadist?" That's when I found out that for 15 years only Military Police (MP’s) have been allowed to carry weapons on bases, and in many places the MP's had been replaced by civilian "security officers."

When I was a deputy sheriff I was not only "allowed" to carry my weapon on duty or off; I was required to do so. There have been thousands of incidents where armed off-duty officers have saved lives all across this nation. But trained military personnel who are licensed to carry weapons off base are not allowed to carry them on the base at Fort Hood and dozens of other military bases in the United States.

Our soldiers, sailors and Marines serving in combat areas overseas today carry their weapons on their bases. And this is not just in the forward areas where combat is expected. They understand that just their presence makes them targets, and that they need to be armed to protect themselves.

Twenty years ago our leaders, exercising sublime stupidity, decreed that the same personnel that we trust to carry arms in other countries were not to be trusted in our own country. I believe that this was in response to the liberal attitude that the Second Amendment was okay in the “old days" but that there is no need for them today except in places where battles are actually taking place.

But of course that was before Islam brought terrorism to  our soil. Since the enemy has brought the battle to us, our bases here are just as much targets as our bases overseas - maybe more so, since the crazies know the soldiers are unarmed here.

The news media never mentions this, but almost all mass shootings take place in "gun-free" zones. These include schools, military installations and businesses that unconstitutionally restrict the gun rights and the customers.

As I often say, Americans have short memories. In October 1991, at a Luby's restaurant in the town of Killeen, Texas a man shot and killed 23 people. Killeen is the town that surrounds Fort Hood, Texas.

Dr. Suzanna Hupp was in that restaurant on the day of the massacre. She hid under a table and reached into her purse for her handgun. It was not there, because Luby's did not allow customers to carry guns on their premises. She ran to get her gun from her car, but when she returned her parents were dead. Could she have saved them? She thinks so. But we will never know. However, one thing is certain. If she and one or more trained citizens had had their weapons with them that day, the gunman would not have killed 23 people.

An even greater irony is a law-enforcement convention was underway at a hotel a few feet away from the restaurant. The hotel had requested that these law enforcement personnel not bring their weapons inside because they did not want to upset their customers. The lawmen complied and locked their weapons in their vehicles.

When the mass killing began next door they ran to their vehicles, unlocked the gun boxes, retrieved their weapons and proceeded to the restaurant. By the time the horrific incident was over, 23 citizens lay dead and 20 more were wounded. Had the officers been armed and able to proceed directly to the restaurant, how many lives would have been saved? Again, we will never know. But what I do know is that if it were not for the doltish decision on the part of Luby's management and the hotel, many of those who were killed would be alive today.

I'm equally certain that if the professional soldiers at Fort Hood, both in 2009 and last week, had been allowed to carry the weapons they were trained to use, the results would've been dramatically different.

While I was researching this article, I came across this Leftist poster:

The problem with this lie, like most, is that it is partly true. The base was filled with people trained to use guns. They just weren’t allowed to carry them.

I have a question for Obama and his spineless Liberal buddies: When did political correctness become more important than the lives of our soldiers and citizens?

Not a Terrorist Attack?
http://www.conservativetruth.org/article.php?id=1414


NOAH – SAVE YOUR MONEY

I don’t normally address two subjects in one week. The Fort Hood article was obviously the most important, but I didn’t want to let another week go by without addressing the movie that was sold to Christians as a Biblical account of Noah and the Flood, but was anything but.

Briefly, very little of the movie is true to the Word of God. In a movie about God and His work, God is not mentioned once. The phrase “The Creator” is mentioned a few times.

But should we be surprised? Darren Aronofsky, an atheist, directed the project. He not only reframes God’s character, he shows Noah considering murdering an infant. When God speaks to Noah, he is seen as suffering a hallucination. The list goes on, but I don’t have room.

Listen to Aronofsky’s sarcastic comments: “The problems arose because the studio was trying to serve religious literalists. Because there is a big part of the population in America who don’t want anything to contradict their view of the Bible, and are never going to be open to this type of interpretation.”

Sorry, Buddy, we don’t want a non-believer to “interpret” the Bible for us. Either stick with the Word, or don’t call it a “Biblical Epic.” Why would we expect a director who makes psychodramas (such as Black Swan, The Wrestler and Requiem for a Dream) to create anything that Christians would want to see?

The really interesting thing is that the movie is thinly disguised propaganda for the environmentalist movement. You discover that God didn’t flood the world to punish sin, as we had all thought. Turns out it was because we were not taking good enough care of the environment. I guess all those campfires where people roasted animals were creating a nasty carbon footprint that was already causing global warming before it was invented. Who knew?

The movie is a classic example of Hollywood making money from gullible Christians. Are we really so hungry for Biblical movies that we clamor to “support” anything that resembles one? Do your research. www.MovieGuide.com is a Christian website that does a good job of reviewing many types of movies.

If you’re a pagan and don’t care, or if you’re a Christian who is willing to pay for some great special effects and knows enough of the Word to see where they have twisted the Biblical account beyond recognition (like some angels that defy God to help Noah), go for it. Otherwise, save your money.