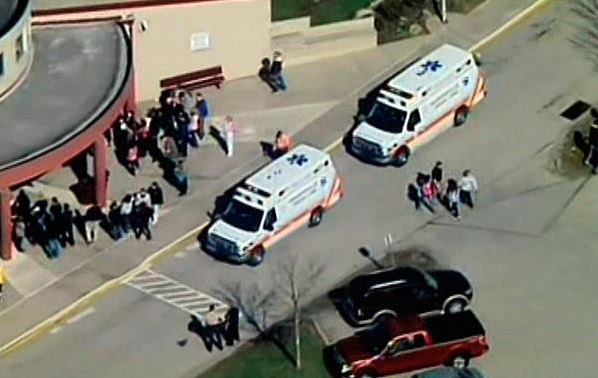 On April 9, 2014, a teenage boy with two ordinary kitchen knives stabbed twenty students, four critically, in a school near Pittsburgh. There was comparatively little coverage of this incident in the Liberal-controlled media. But if a small handgun had been used and two people slightly injured, we would have been inundated with non-stop, 24-7 coverage.

Why do the media selectively cover mass murders and attacks? There can  be no answer to this question, except that they have their own agenda. They believe all violence stems from the fact that our Founding Fathers were stupid enough to include the Second Amendment in the Bill of Rights. Any incident that does not push that narrative is not worthy of consideration. Their minds are made up, and they refuse to be confused by facts.

The politically incorrect facts are that:

Consider the worst mass killings in our nation’s history:

In none of these incidents would infringement on our Second Amendment rights, background checks, or any type of gun control legislation prevented the tragedies. But if armed citizens had been on the scene, things may have turned out quite differently. For instance, had there been armed air marshals on the four 9-11 flights, they would have stopped the Jihadists dead in their tracks (pun intended). Have you ever wondered why Israeli flights are the safest in the world? Every flight has armed air marshals aboard.

Around the world mass murders have been committed by such simplistic items as matches, common chemicals used as poison, axes and vehicles.

In 2002 armed Islamist terrorists took 850 people hostage in a theater in Moscow. During a rescue attempt all of the Muslims and 130 of the hostages died from poison gas pumped into the theatre by the Russian government.

In 2004 Muslim terrorists took over a thousand children and adults hostage at a school in the town of Beslan in the south of Russia. After three days, as Russian security forces closed in, 318 of the hostages were locked in the school and burned alive.

The Russians have some of the toughest gun laws in the world. But they have no laws against matches.

In February of this year a Muslim group entered a school in Nigeria using machetes to subdue the students. They then locked them in and burned the students to death. The Islamists cut the throats of students who tried to escape though windows.

In 2004 a series of coordinated bombings on trains in Madrid killed 191 people and injured 1,800. Although initially Basque separatists were suspected, the official investigation by the Spanish judiciary found that the attacks were directed by al-Qaeda-inspired Muslim terrorists.

Over a three year period (from 2010 to 2012) in China, dozens of schoolchildren were killed, and many dozens more maimed – but not one gun was used. The mass murderers primarily used knives. But other creative mass murderers used box cutters, meat cleavers, and axes. In one case a hammer was used to attack the children and their teachers.

In 2003 a taxi driver in Japan who was not satisfied with the medical care he received set fire to a subway train. In that incident, 198 were killed and another 147 were injured.

In Tokyo, Japan in 2008 a man slammed his car into a crowd, killing three. He then jumped out and killed four more with a knife before being subdued.

In 1995 an extremist group in Japan used sarin gas in a subway. Thirteen were killed and 50 were injured.

In Deltona, Florida, teens upset over the theft of an Xbox killed six people in 2004. Although all four were old enough to have purchased guns, they chose baseball bats as their weapon of mass murder.

Finally, there have been hundreds of terrorist bombings in Great Britain since the early 1970’s, killing hundreds and injuring hundreds more. Great Britain has the most restrictive gun laws imaginable. It is next to impossible for a citizen to get a gun permit, even though armed citizens could have thwarted many of the bombings. Most ridiculous, even police officers (except for a small number of elite teams) are not allowed to carry guns! Imagine how frightened a determined terrorist is of a police officer’s night stick!

Here’s an interesting fact. Although there are practically no guns in the hands of Great Britain’s citizens, there are roughly the same number of mass murders there as in the United States. They just use different ways of killing there.

There are many, many other examples of mass murders committed without the use of guns in the US and worldwide. (See the LINK below, “Non-gun Mass Murders")

Criminologists and mental health professionals will tell you that people first decide to commit murder, and then choose their weapon based on whatever is available. People who are bent on mass murder often choose not to use guns for the same reason that terrorist groups choose not to: they are not efficient.

Firearms are designed for personal defense. Explosives, fire and poison gas are all far more effective.

So why are guns not allowed in schools, often even in the hands of the school police who are supposed to protect the children? Why are trained soldiers not allowed to carry their weapons on US bases, when those bases have become the targets of Islamic terrorists?
(See the LINK below to my article last week on this subject, “Maybe NOW They’ll Let Soldiers Carry Guns”)

I believe that the reason Liberals demonize guns and want to disarm American citizens is the same reason every totalitarian government – Socialist or Fascist – has done so. A government cannot exercise totalitarian control over its citizens if they are armed.

Armed Americans are not a threat to public order. Ultimately they are the final line of defense for public order. There are not enough police in this country to deter crime. Look at how high the crime rates are in the cities with the strictest gun laws, and how low they are in the cities and states where there are the most citizens with carry permits. I can tell you that if I decided to commit a crime, it would most certainly not be in the state of Texas!

After Pennsylvania school stabbing, authorities and community ask: 'Why?'
http://www.cnn.com/2014/04/10/justice/pennsylvania-school-stabbing/