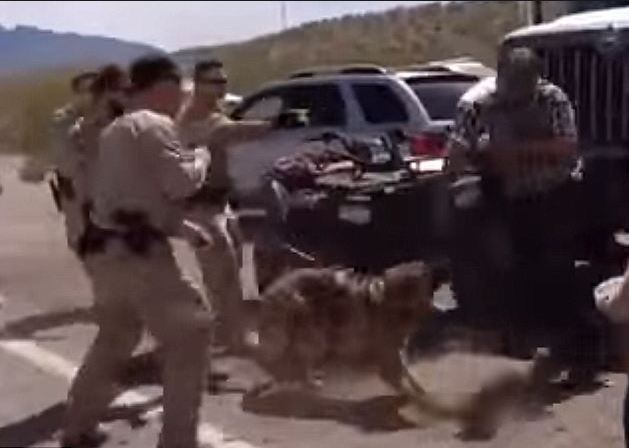 What has gone wrong? Why, in the “Land of the free” do so many citizens see their government as the oppressor rather than the guardian it is supposed to be?

Some will point to the fact that our government has switched its emphasis from spying on our enemies to spying on its own citizens. Others will point out repressive and unfair tax code that steals from those who work hard and gives to those who refuse to work. Still others will reference the repressions of religious expression and free speech that has become so prevalent, particularly under the current administration.

Obviously much of the current fear of our own government stems from the video we have seen in recent weeks of armed federal thugs menacing unarmed peaceful demonstrators over cattle grazing rights.

There has been much written about the details of Cliven Bundy’s protest. His family has grazed their cattle on the land since his family bought it in 1887 - 126 years ago, and long before the federal Bureau of Land Management (BLM) existed. This monster (some would say monstrous) agency has seized control of state and private land larger than the combined land mass of France, Germany and Italy. It controls more than 80% of the State of Nevada – an area larger than Great Britain. Now reports are emerging that the BLM wants to take over an additional 90,000 acres in Texas. (NOTE to the BLM: I don’t think it would be smart to mess with Texas.)

The BLM says it wants the cattle off the land to “save the desert tortoise.” According to reliable reports, not one desert tortoise has complained about the cattle. However, there was a mass tortoise demonstration when the BLM killed thousands of the tortoises last August. That’s right: first they killed them, now they want to protect them. (See LINK below: “Government Kills Thousands of Desert Tortoises.”)

According to a report in a Nevada newspaper (see LINK below) the truth is that “One reason listed by BLM for the cattle roundup was so it could save tortoises in the Gold Butte area, since it plans to kill off tortoises by putting up solar panels at nearby Dry Lake Solar Energy Zone.” National news accounts say the main beneficiary of the “Solar Energy Zone” will be a Communist Chinese company. (See LINK below, “Chinese Benefit as Americans Suffer.)

Geoffrey Lawrence, deputy director of policy at the Nevada Policy Research Institute, says Bundy’s family actually owns the land in dispute under the Homestead Acts. “When Nevada was entering statehood, it had to transfer lands to federal control temporarily, in order to clear title so those lands could be freely sold for private development, Lawrence explained. The federal government, however, reneged on its promises to return the land.”

The truth is that Bundy has rights to the land, but our activist courts have ruled against him repeatedly for the last 20 years. No huge surprise here – the federal judges (political appointees all) have ruled in favor of the federal government. The problem is the methods they've used in enforcing the court orders.

In a civilized country, court orders are enforced by real policemen. These are peace officers who are responsive to their communities, either directly or indirectly. Sheriffs are elected, and chiefs of police are either elected or appointed by people who must be elected. In this scenario, there would be fewer Gestapo style activities taking  place at the Bundy ranch.

But in the matter of Cliven Bundy, the BLM sent its own SWAT team to terrorize US citizens who were exercising their First Amendment right to peacefully protest. They sent armed paramilitary agents with machine guns, attack dogs and helicopters circling overhead. They had snipers surrounding the area with their weapons trained on US citizens. And they used Taser weapons on those citizens and allowed their dogs to attack them. (All of this can be seen on video that has been shown repeatedly on national television.)

By the way, Democrat Senator Harry Reid has called Bundy and his family “Domestic Terrorists.” Someone needs to remind the Senate Majority Leader of what domestic terrorism looks like – for instance the Oklahoma City bombing. No one has been shot or blown up in Nevada. And the Bundy family, although they have the right to do so, has deliberately chosen not to carry any weapons to their lawful protests. It is inflammatory talk like this from Reid that leads to disasters like Ruby Ridge and the Waco Massacre.

Setting aside for a moment the fact that these provocations could have triggered another Waco Massacre (in which heavy-handed federal action resulted in the deaths of 76 men, women and children), the bigger question here is “WHY DOES THE BUREAU OF LAND MANAGEMENT NEED ITS OWN SWAT TEAMS?”

By comparison with the rest of the world, the US is the only nation whose head of Education has a SWAT team. They use it for such things as a recent raid in California where they kicked down a door and raced in screaming and brandishing automatic weapons – over a student loan. It’s a good thing they didn’t use the grenades, because they broke down the wrong door.

We have all seen the reports about the millions of rounds of ammunition the Social Security Administration has bought for its private army. I have two questions for them: Why do they need that much ammunition, and why did they buy hollow-point bullets? Their answer to both questions is that it is for target practice. Well, they couldn’t use millions of rounds for target practice in ten years. And hollow-point bullets are used for only one reason. They are designed to fragment inside the body of the person shot and cause maximum damage (usually death). Hollow-point bullets are very expensive. Real police agencies use inexpensive “wad cutter” bullets for target practice. Obviously the SSA has bought these bullets to use against American citizens.

The ever-popular IRS used force to seize a fishing vessel in Washington State. They had claimed that he owed taxes. His accountant proved that he did not. But the fisherman, knowing that with the IRS you are guilty until proven innocent, decided to pay the bill and then go to tax court to get his money back. He pulled into port with enough fish to pay the bill and his accountant. The federal thugs seized his boat and refused to allow him to sell the fish. Not only did they keep control of the boat until the fish rotted and the fisherman was financially ruined, but the rotting fish ruined the boat, and it had to be scrapped. He eventually won in federal tax court, and did not have to pay the wrongful taxes. But the Feds gave him nothing for his fish or his boat. Now this former businessman who employed others works as a deck hand on someone else’s boat, and lives in a rented room because he lost his house.

And what about the Justice Department raid on the Gibson Guitar Factory, again with SWAT teams and automatic weapons? Surely Gibson must have been concealing drugs or bombs in the factory to justify such a raid. Actually, there was a dispute over where Gibson had bought some of the wood it used in its guitars. One federal agent terrorized the employee who sorted the wood, telling him he could get five years in prison. Of course, a single local deputy sheriff could have handled the situation. But what’s the use of having a SWAT team if you can’t use it?

I can think of a place where the US could have used a SWAT team – Benghazi. But Obama determined at the beginning of the attack on our diplomats that it was “too late” to send help. As it turned out, our ambassador didn’t die until about eight hours after he begged for help. But why waste precious resources protecting Americans abroad when you have a nice safe guitar factory to raid?

Harry Reid said the Bundy’s and their supporters were not Patriots, but were “domestic terrorists.” He then went on to say that “We are a nation of laws, not of men and women.” (You can’t make this stuff up.) Hopefully the men and women of Nevada that Reid so despises will realize that they make the laws through the lawmakers they elect. And hopefully they will hand him an ignominious defeat when he runs for re-election in 2016.

PUBLISHER’S NOTE: Just to be clear, proper SWAT teams are necessary and often save lives. But they should be local SWAT teams from the police and Sheriff’s offices. In my opinion, the only federal agency that has a legitimate need for a SWAT team is the FBI. The various Departments of Paperwork do NOT need such firepower. They have become, in effect, Obama’s private army – and that’s the last thing this nation needs.

Also, it has been pointed out to me that some of the demonstrators carried legal weapons to the protests. The Bundy family and their supporters were unarmed, and encouraged those who supported them not to bring arms. They were willing to go to jail over this, but they did not want anyone to be hurt. However, they could not stop others who came out to support the cause from carrying weapons.

A Fair Account of the Bundy Battle from a Nevada Newspaper
http://www.elynews.com/2014/04/18/bundy-wants-equity-blm-wants-money/

People Power Prevails as Government Backs Down in Nevada
http://www.acting-man.com/?p=29864