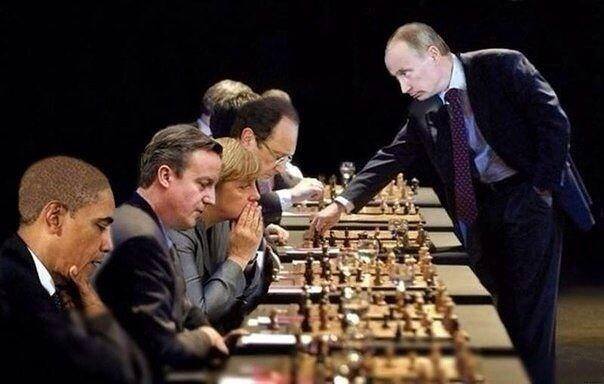 Vladimir Putin is playing a dangerous game of chess with the free world – and he is winning. His goal is nothing less than the re-creation of the old Soviet Union. Ronald Reagan and Margaret Thatcher are turning over in their graves.

Vladimir Putin, in a 2005 speech to Russian political leaders, said, “The breakup of the Soviet Union was the greatest geopolitical catastrophe of the 20th century.” He also called the 1991 breakup of the 15 nation “Union” a “genuine tragedy.” You would expect a man who believes such things to act on his beliefs. We are watching that happen.

Zbigniew Brzezinski, former US National Security Advisor, has said that, “Without Ukraine, Russia would always be a regional state, and with Ukraine it would always be a great power.” Brzezinski, a respected political scientist and geostrategist was born in Poland. He knows the former Soviet Union like few others, and he has a warning for America. (See LINK below: “What Obama Should Tell Americans About Ukraine.”)

Before we look at the re-creation of the USSR, let’s look at how it was first created. The name was a joke – but everyone was afraid to laugh. It was called the “Union” of Soviet Socialist Republics. The way that “Union” was formed would be like a group of thugs entering a business with automatic weapons and forcing all the workers to sign cards joining the AFL-CIO union. The 14 nations that were forced by Russia to “join” the USSR were in a similar position.

I don’t have time to go into a detailed history of the formation of the USSR (although it is a fascinating study). Suffice it to say that not one nation joined voluntarily. Either force or the threat of force motivated the induction of these nations into the “evil Empire.”

The USSR began with a forced treaty in 1922 that joined Ukraine, Belarus and the Trans Caucasus with Russia. That same year Nazi Germany recognized the thugocracy. It then commenced its bloody annexation of 11 other nations. In 1933, to our everlasting shame, FDR (a Socialist himself), in his first year in office, convinced US politicians to recognize the Communist nation.

Ukraine is vital to Putin’s ambitions. It has more population than any of the other former slave states. It is known as the “Breadbasket of Europe,” once providing 25% of all the food produced in the USSR. Major oil and gas pipelines pass through the Ukraine. And it supplies Russia with its only warm-water port.

So Putin has begun the re-creation of the former USSR by forcibly stealing the Crimean Peninsula, a republic of Ukraine. Yes, the people voted to be annexed by Russia. But how would you vote if your nation was occupied by Russian thugs who had heavily armed vote watchers at every polling place? Forget the fact that the vote was done in a week, giving opponents no time to make a case against annexation. Forget the obvious voter fraud that was widely reported. The fact is that to vote against annexation was to risk your life.

Now Russia is employing the same tactics in Eastern Ukraine, while massing 40,000 storm troops on the Ukrainian border. Anyone want to place bets on whether there will be a vote to annex this area, and how the vote will go? Putin’s next step will be to do the same with the rest of Ukraine, and an entire nation will be lost to the KGB thug. (I’m sorry. Putin says he is a “former” KGB thug. I wouldn’t want to offend a guy with as many nukes as this dirt bag.)

What I can’t understand is why Obama and the cowards that lead Europe are doing nothing to stop this. The first thing they did when the crisis started was to say that military intervention was off the table.

Imagine being accosted by a mugger with a knife, and you have a licensed concealed handgun on your person. It's doubtful your first action would be to take the gun out, lay it on the sidewalk, and say, “I have a gun, but I’m not going to use it. Let’s talk about this."

But that’s what Obama and the leaders of Europe have done. For heaven’s sake, at least keep the threat of force on the table. That’s the only thing bullies like Putin understand. Instead, our fearless leader is threatening Putin with sanctions. Some of these sanctions include “travel restrictions on people close to Putin.” This could be tragic. Putin’s wife may not be able to come to New York and shop at Macy's and Saks. I’m certain Putin is trembling with fear.

Obama is so terrified that he won’t even send the Ukrainians weapons so that they can defend themselves. They are outmanned and outgunned, and the “leader of the free world” won’t even ship them some guns.

Instead, he offers “moral support.” I’m sure that will make the bullets bounce off almost as well as a bullet-proof vest.

The saddest part of all of this is that we need the Europeans for the threat of sanctions to have any impact. But Obama’s foreign policy has been so inept that they don’t trust us (or him). He makes promises, then breaks them. He draws “red lines,” then ignores them. When our allies (like Israel) are in trouble, he looks the other way. No one believes him, no one trusts him. How can he lead an effort to at least slow down the re-creation of the USSR?

As Brzezinski has said, Obama has yet to explain to the American people that the Ukrainian invasion has the potential to become the most serious international crisis in the last two decades. Obama has uttered not one word about the threat to international stability if we allow ravagers to forcibly take whatever they want. He owes Americans the truth.

America needs a Ronald Reagan who was not afraid to stand up to the Evil Empire. We need a George W. Bush who was able to put together a multi-nation coalition – not to slap wrists with sanctions, but to go after international terrorists with real guns and bullets. I can guarantee you that of Ronald Reagan or George W. Bush (or even Richard Nixon) were in office, Putin would not dare to make these moves.

Does anyone have a phone number for “W?” Maybe he can be talked into coming out of retirement.

What Obama Should Tell Americans About Ukraine
http://www.politico.com/magazine/story/2014/05/what-obama-should-tell-americans-about-ukraine-106277.html#.U2ayjFcvAvk

Vladimir Putin is Trying to Take Russia Back in Time
http://www.telegraph.co.uk/news/worldnews/europe/russia/8808712/Vladimir-Putin-is-trying-to-take-Russia-back-in-time.html