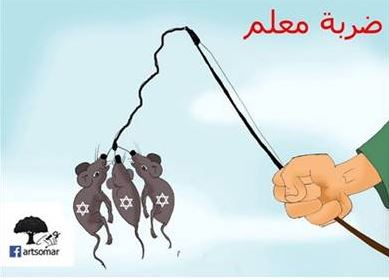 The Palestinian authority – which the US funds – has posted a sick cartoon on its Facebook page. It depicts the three Israeli school boys who were kidnapped by terrorists two weeks ago as rats who have been caught by an Arab fisherman. The rats are complete with hooks in their mouths and Stars of David on their bodies.

Here is what happened…

The terrorist organization Hamas celebrated the kidnapping and congratulated the kidnappers. But it stopped short of taking credit for the atrocity, fearing the wrath of the Israeli Defense Forces.

Israel’s Prime Minister, Benjamin Netanyahu, has no problem with giving credit where credit is due. He has stated that Israel has intelligence which indicates that Hamas is responsible, and he has identified two Hamas terrorists considered to be the leaders of the abduction of the three boys.

What was the catalyst for this kidnapping? It appears that a foolish – some would say criminal – decision by our own president paved the way for this and other acts of terror against Israel.

The US-designated terror group, Hamas, has killed thousands in Israel, including dozens of American tourists. Hamas wanted more say in the government of the Palestinian Authority (PA) led by Mahmoud Abbas, a retired terrorist.

US Congresswoman Ileana Ros-Lehtinen (R-FL) has stated, “It appears that the Palestinian Authority looked for, and found, loopholes in our laws that prohibit funding to a unity Palestinian government that includes the terrorist group, Hamas.”

“This whole situation – the administration’s failed attempts at peace that resulted in this unity PA government – is a failure of American leadership. But worst of all, it appears that now the American taxpayers are on the hook for nearly half a billion dollars in aid to terrorists who openly call for the destruction of our friend and ally, the democratic, Jewish state of Israel,” said Ros-Lehtinen, chair of the House Foreign Affairs Subcommittee on the Middle East.

An article in the Washington Post reported last week that the Obama White House helped the Palestinian Authority design a government structure that would allow it “to skirt, barely, U.S. prohibitions on aid to a Palestinian government that has ‘undue’ Hamas presence or influence.” The Post reported that the administration “worked behind the scenes to suggest terms for the new coalition government that would not trigger the U.S. ban, reasoning that the money helps preserve American leverage.”

“The money” the Post referred to is the almost $500 Million the US gives the PA every year. No one can explain to me what we get for our money, except dead Israeli allies. But we have been paying the Palestinians since their “government” was formed – first to terrorist Yasser Arafat, then to supposedly reformed terrorist Abbas. And now to the new Hamas-dominated “unity government.” (The only unifying goal I can detect is their desire to kill Jews and Christians, Israelis and Americans.)

So Abba’s party, Fattah, along with Hamas, approved the appointment of a new government on June 2, 2014. Within hours the Obama administration had recognized the new government. Lawmakers on both sides of the aisle have condemned the hasty official recognition, and have said that Hamas’ involvement in the government should have automatically cut off the half Billion Dollars of annual funding by the US.

Eighty-eight of the 100 US Senators sent a letter to Barrack Hussein Obama on June 26th expressing “grave concern” over the new government, indicating that the Senate would seriously consider cutting off funding to the PA because of Hama’s involvement. Senate Foreign Relations Committee Chairman Robert Menendez (D-N.J.) stated earlier that the Hamas-Fattah government violates U.S. aid requirements and called the new government a “two-headed dragon.”

Almost immediately after Obama gave the new terrorist coalition a hug and a kiss, Hamas terrorists kidnapped the three school boys. Was there a connection between the two events? Think about it. The most powerful man in the world basically said, “I’m OK, and you’re OK” - to Hamas. No terrorist worth his suicide vest would pass up an opportunity like that.

Whenever our nation or its allies are threatened we always hear Liberals pushing for more talk. “Let’s give peace a chance,” they cry plaintively. In a 2002 article, “Let’s Give War a Chance,” I wrote…

“Arafat, who cheerfully sends young boys and girls to die for him, often publicly declares his desire to be a martyr for Allah. But whenever it appears that Allah might take him up on his offer, this spineless murderer cowers behind mosques or women, begging the international community to save him. I wonder what would happen if the United States stayed out of Israel’s affairs long enough for Israel to give Arafat the same kind of attitude adjustment we gave the Taliban?”

Most Americans are not aware of the tremendous pressure the US has put on Israel since Obama took office. This is mainly because the Liberal media fails to report on it (just as it has ignored the plight of the three kidnapped teens). The pressure has included publicly scolding our ally, threats to withdraw military and other aid, and not-so-subtle threats to retaliate if they take action we don’t like.

In 1967 Israel faced down the Arab world and beat them – in six days! When Iraq built a nuclear reactor in Osirak that threatened Israel and the US, Israel took it out before it could be completed, no thanks to the US. And in dozens of other cases, this tiny nation surrounded by Arabs determined to kill the last man, woman and child, has risen to the occasion and faced down the murderers.

But for some strange reason Obama seems determined to undermine the ability of these brave people to defend themselves – even though they are our only real ally in the region. Perhaps it is because our president himself is not an ally of the United States.