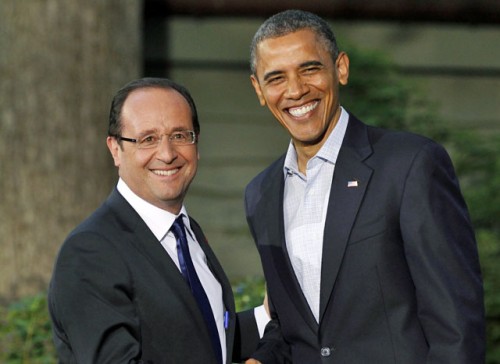 I own several gold coins from England that bear the image of “The King of America” – George III. We don’t think of him in that way – after all, America doesn’t believe in monarchs. But George did indeed rule America in our colonial days. The sad thing is that in many ways Americans had more freedom under King George III than we have today under King Obama I.

In a meeting with then-French President Francois Hollande at Monticello, Obama stated, “That’s the good thing - as President, I can do whatever I want.” Liberals claimed that was only a joke.

But Obama has been very clear that he believes there are no limits to his power and authority. He has made many statements like this: “I’m eager to work with all of you. But America does not stand still - and neither will I. So wherever and whenever I can take steps without legislation to expand opportunity for more American families, that’s what I’m going to do.”

The very clear message is that he believes he and he alone knows what is best for families, for the middle class – for America. And that he has the right – and the power – to override the will of Congress, the Supreme Court and the American people. That very sense of omniscience and omnipotence was what led many monarchs throughout history to crush dissent, crush opposition – to crush the very people they purported to serve.

Fortunately the Supreme Court of the United States has been on a roll since 2012, rebuking Obama for many of his king-like actions. He has been acting like a king for six years, but the nation (and the courts) have finally figured out that his arrogant single-handed running of our government violates the Constitutional doctrine of Separation of Powers.

This Separation of Powers refers to the three “separate but distinct” branches of government. You will notice that I did not say “separate but equal” as Liberals who do not understand the Constitution are prone to say. The Congress, the Courts and the Executive Branch are supposed to operate independently of one another, while at the same time respecting the authority God and our Founders gave to the other branches. But nowhere in the Constitution can the notion be found that the three branches are co-equal.

I have written about this in detail elsewhere, so let me just briefly state that the Founders made it clear in many ways that the Legislative Branch was to be the most powerful of the three. The courts were to be weaker, because they have no power to create laws, only to ensure that laws were faithful to the Constitution (Constitutional).

The Executive was designed to be by far the weakest branch. It does not have the power to create any laws (although Obama has repeatedly usurped the role of Congress by creating laws through executive fiat). Furthermore, it does not possess the power to decide if a law is Constitutional (although Obama continues to usurp the Power of the Supreme Court by deciding which laws to enforce based on his personal interpretation of their Constitutionality).

If you think of the relationship of a Board of Directors and their Executive Director you see how the Founders intended the Office of the Presidency to function. The Board sets the policy (makes the laws) and the Executive carries out the policy (faithfully executes the laws).

In Article II, Section 3 of our Constitution we find the “Take Care Clause” (also known as the “Faithful Execution Clause”). It reads, in part, “He shall take care that the laws be faithfully executed.” It doesn’t say that he should use Executive Orders to make laws. It says that he should take great care to ensure that the laws written by Congress are faithfully executed.

When America was founded, unfortunately two things put us on the wrong track with regard to what is referred to as the “Balance of Powers.” First, George Washington began leading the nation during a time of war. Although there was a president of the Continental Congress who served as the moderator of Congressional proceedings, for all intents and purposes Washington functioned as the chief executive of the nation even before he was elected the first President.

In 1776 communications were slow, and many times there was no choice but for the Commander-in-Chief to use a lot of discretion when Congress could not be consulted. But with the instant communication in use today, there is no excuse for the Twitterer-in-Chief to ignore Congress and legislate with his pen.

The second problem in the early days of our nation was that George Washington was frankly adored by the people. He was unanimously elected by all the electors in both 1789 and 1793. He was a war hero many times over; he was widely credited with holding the nation together when factions threatened to tear it apart; and he was the best-known man in the nation. Many wanted to make him a king rather than the president. So it should not be a surprise that many expected him to rule by decree rather than functioning within the confines of a Republic.

To his credit, Washington refused to be a monarch, and he respected Congress. But, intentional or not, there was overuse of executive power in his administration, and the precedent set then has impacted subsequent administrations. But no one has abused executive authority as excessively as Obama.

Many pundits have claimed that Obama has issued more executive orders than any other president. This is not true. What is true is that he has used executive power far more artfully than any president in history, and the effect of his overreach has been that he has manipulated the nation in ways that would have been unimaginable in the past. For a more detailed treatment of this subject, see my article, “Who Has Issued the Most Executive Orders?”

Obama’s most recent resounding rebuke from the Court took place last week. This was a 9 to 0 decision that Obama did not have the right to make recess appointments when Congress was not in recess. The Court made it abundantly clear that this so-called Constitutional scholar had violated the Constitution.

In Harris v Quinn (which many have called “The War on Workers”) the Court ruled against Obama again. At issue in this case was the fact that the government was forcing people who were not members of a labor union, and did not believe in the union’s strong-arm tactics, to pay dues to the union.

In the Hobby Lobby case the Court handed Obama a stinging defeat when it told the Administration that it could not force family corporations to violate their religious beliefs to satisfy Obama’s blood lust. Obama insisted that the family pay for abortion-inducing drugs, and threatened fines of tens of thousands of dollars every day until they gave in. They said they’d rather go out of business than pay for the murder of unborn babes.

In many of its rebukes against King Obama, the Supreme Court ruled unanimously – something that is rather rare in its history. These included striking down a law that required large buffer zones around abortion clinics to prevent protest and a ruling forcing police in most cases to obtain a warrant before searching the cell phones of citizens.

Altogether there have been several dozen Supreme Court rulings against Obama’s overreach, thirteen of which were unanimous. To be fair, some of the cases were ones in which Obama was not named or directly involved. But in all of them he used all the power of the government – and our tax dollars – to support these violations of our liberties.

That’s what it’s all about, folks – liberty. Monarchs have always claimed that they acted in the best interest of the people. And in some cases their actions did benefit the people. But if we could go back in time and ask the serfs and slaves if they would prefer the occasional kindness from the king, or their liberty; there is no question that they would choose freedom and liberty in every instance.

As I end I would like to share a quote from one of my favorite public servants, Dr. Ron Paul:

“The Declaration of Independence served notice to a tyrannical king that the “the good people of these colonies…declare” their right to be “FREE AND INDEPENDENT STATES.”

“The colonists had had enough authoritarian government and were not going to put up with it any longer. The crucial question that we must ask ourselves is: What would the Founders think of what we tolerate from our government’s abuse of our liberties today?

“My bet is that, not only would they be shocked, but they would be ashamed as well. An argument can be made that liberty is in greater jeopardy today than it was in 1776.”

We did not have a Constitution until eleven years after the Declaration of Independence. During those years we were governed by the Articles of Confederation, which proved to be inadequate. In 1787 the Constitutional Convention was held. Its deliberations were held in the strictest secrecy. When they were completed many concerned citizens gathered outside Independence Hall to find out what had transpired. A woman from Philadelphia, Mrs. Powel, asked Ben Franklin, "Well, Doctor, what have we got: A Republic or a Monarchy?" Franklin replied, "A Republic - if you can keep it."

YOU MUST WATCH THIS SHORT PROPHETIC VIDEO
https://www.youtube.com/embed/BNRT0P-oZfw#t=39

Who Has Issued the Most Executive Orders?
http://www.conservativetruth.org/article.php?id=3941