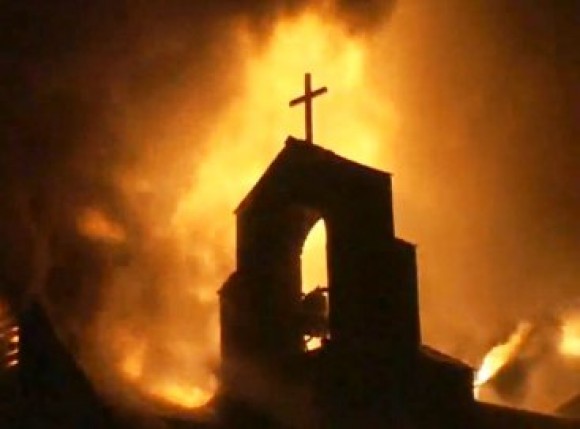 A large group of militant fundamentalist Christians has informed 35,000 Muslims that if they do not convert to Christianity before a specified deadline, they will all be executed. The Muslims are fleeing their homes to avoid being murdered.

Of course, this is not true. If it were, the Liberal news media would be running non-stop stories excoriating the Christians for their crimes. Actually, the story is true, but it is Muslims who have threatened the lives of Christians who will not convert to Islam. And the silence from the mainstream media has been deafening.

Which leads us to wonder, why is the persecution and murder of Christians worldwide not worthy of notice? At the same time, if there is even a hint of a perceived insult to Muslims, the print and television media is immediately up in arms.

The second largest city in Iraq is Mosul. Today, for the first time in the city’s history, Mosul is empty of Christians, according to Louis Sako, the Chaldean Patriarch of Iraq. Not that long ago 100,000 Christians of various denominations lived there.

Last week the Muslim terrorists who took over the City of Mosul on June 20 issued an edict: The city’s Christians had until mid-day on July 19 to convert to Islam or “face the sword.”

There have been Christians in Iraq since the first century when disciples brought the Gospel there. In 2003 over 1.5 million Christians lived in Iraq. Due to almost 100 attacks on churches and the murders of preachers and priests, there are fewer than 1/3 that number in Iraq today.

Those who remain have moved from city to city over the last ten years, trying to find a place of refuge. Although they are clearly a persecuted minority, the US has issued only a tiny number of passports to persecuted Christians. But, according to an Iraqi Christian, “We see that they give passports to Muslim terrorists and accept homosexuals who say they have been discriminated against - and yet they refuse us entry.”

Why is it that the world seems to ignore or accept the persecution of Christians by Muslims? I believe it is a direct result of the cowardice of world leaders, including our own president. Obama continually parrots the foolish phrase that George W. Bush uttered when he was president: “Islam is a religion of peace.”

Muslims are commanded to fight “unbelievers” until they are either dead, converted to Islam, or in a permanent state of subjugation to Islam. There is no option under Muslim rule for people of other faiths to live and worship independently of Islamic regulations.

This is demonstrated in this passage from the Koran 9:29: “Fight those who believe not in Allah nor the Last Day, nor hold that forbidden which hath been forbidden by Allah and His Messenger, nor acknowledge the religion of Truth, even if they are of the People of the Book, until they pay the Jizya with willing submission, and feel themselves subdued.”

As long as world leaders continue to defend and excuse Muslim crimes against humanity, the Muslims will feel emboldened. They will continue to murder Christians, force them into slavery, drive them from their homes and persecute them in any way they choose.

And why shouldn’t they? The leaders of the Western world, led by Obama, have given them a free pass.

It is outrageous that the same Obama who goes out of his way to call and congratulate homosexual sports stars for broadcasting their sexual preferences has been totally silent on the news that Muslims have told Christians that they must convert to Islam or be killed.

Convert to Islam or Face the Sword
http://o.canada.com/news/world/fisher-convert-to-islam-or-face-the-sword-iraqi-christians-told-by-sunni-extremists