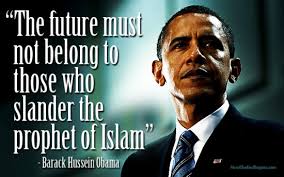 In the public record we have a long, long list of foolish and untrue statements made in public by Barack Hussein Obama. But his recent adamant statement that the Muslim terrorist group, ISIS is not Islamic should win first place in both the foolish and untruthful categories.

Let's look at the facts:
1) The group describes itself as Islamic.
2) Its name begins with “Islamic State.”
3) They persecute and kill anyone who is not Muslim.
4) They told thousands of Christians that they must convert to Islam or die.
5) They have stated repeatedly that their primary goal is to create a Worldwide Islamic Caliphate.

Which of the facts above is Obama not able to understand? Perhaps he doesn't understand the meaning of the word "caliphate." Caliphate comes from the word “caliph,” which means successor, as in the successor to Mohammed. As the successor to Muhammad, the Caliph is not only supreme leader of the religious activities of the nation, but also is the head of the government.

But what government? Are we talking about an Islamic state like Iran, where there are puppet public figures who take their orders from the Muslim religious leaders? No, Iran is not a Caliphate. It is an Islamic religious state. A caliphate will not exist until the whole world is under Islamic rule.

“That could never happen,” some say. Well, the Second Caliphate, in addition to Muslim lands, extended well into Central Asia and Europe. (See LINK below.)

A World Caliphate is the stated goal of ISIS. They're starting in the Middle East where they have the most strength, but they are coming for us. They have made no secret about it. Europe is next. Then the United States. 77% of Americans believe that ISIS could attack here.

They have declared war on the civilized world. Yet the Obama administration refuses to call our military action against them in a war. Why is that?

You may remember the George Bush’s "war on terror" vanished as soon as Obama took office. The War on Terror suddenly became an “Overseas Contingency Operation."  Why is Obama incapable of calling a spade a spade? Why must he call it an “agricultural implement?"

He has a long history of this type of lawyerly twisting of words. The war in Libya was described as a "Kinetic Military Operation." (If you don't have a clue what that means, don't feel alone; I didn't either.) The terrorist operation at our military base in Texas, Fort Hood, was described by Obama as "Workplace Violence." We all know what workplace violence is and what happened at Fort Hood was not that. A Muslim military officer (Major Nidal Hasan) who had been corresponding with known top terrorist leaders committed an overt act of terrorism, in which he killed 13 Americans and wounded 30 others. He screamed “Allahu Akbar” as he mowed down unarmed military and civilian personnel. If Obama still thinks this was not an Islamic terrorist attack, then all he need do is look at Major Hasan’s recent request to ISIS that he be allowed to become a citizen of their so-called Islamic state.

And now Obama and our Secretary of State have come up with the most ludicrous misnomer of all. When asked by a reporter if the US is at war with ISIS, John Kerry responded, "I think that's the wrong terminology. What we’re engaging in is a ‘Significant Counter-terrorist Operation’."

Why is the president of the strongest nation on earth so terrified of using the word "War?" It's really simple. He ran as an anti-war, end-the-war-in-Iraq, and end-the-war-in-Afghanistan candidate. As the Wall Street Journal said, he had been an anti-war president so long that he doesn't have a clue about how to be a war president.

When George Bush started waging war on terror he put together a coalition of over 40 nations, 30 of which contributed actual combat troops to the effort. As I write this on the 13th anniversary of 9/11, Obama has a "coalition" of one. A few nations have offered "help" or "support," but so far not one has offered to get its hands dirty.

Why is that? It's simply because Obama blows what Charles Krauthammer calls an “uncertain trumpet.” If you don't know what you want to do, how you're going to do it, or what resources you need to accomplish whatever it is, how can you expect others to follow you?

Obama campaigned on getting us out of Iraq. He did that. But he refused to leave enough resources to maintain the peace for which so many fought and died. On July 12, 2007, President Bush warned that it was “dangerous to withdraw from Iraq.” How right he was.

Now, as a direct result of Obama’s own cowardly actions, we are back at war in Iraq. He refused to really intervene in Syria, allowing ISIS to gain strength there. And he failed (deliberately, most believe) to negotiate a Status of Forces Agreement with Iraq that would have kept some US troops there.

No wonder he's terrified. He wanted his legacy to be that he was the president who ended war for all time. Instead, we will still be at war when he finally leaves office.

Besides the fact that he is too worried about politics to do his job of protecting us, Obama cannot wage war against ISIS because he does not understand Islam. He has parroted the line that “Islam is a religion of peace” so often that he seems to believe it. But listen to just a few quotes from the Koran or Qur’an (the Islamic equivalent of the Bible) from a website written by former Muslims (www.FaithFreedom.org):

Qur’an tells us to: "not to make friends with Jews and Christians" (5:51), fight them "until they pay the Jizya (a penalty tax for the non-Muslims living under Islamic rules) with willing submission, and feel themselves subdued" ( 9:29).  "Kill the disbelievers wherever we find them" (2:191), "Murder them and treat them harshly" (9:123), "Fight and slay the Pagans, seize them, beleaguer them, and lie in wait for them in every stratagem" ( 9:5).

Please don’t take my word for it. Do what Obama ought to do. Search for the phrase, “Does the Koran allow the killing of infidels.” Google gave me almost a million “hits.” The first was an authoritative website called The Religion of Peace (see LINK below) that exposes the violence taught in the Koran. Of course there are also hundreds of sites where Muslims try to explain away the violence taught by their religion. But if you simply read the words of their “Holy” book itself, it will become quite clear that Islam is anything but a religion of peace.

If the “peaceful” Muslims actually read the Koran, they would be horrified. And they would demand that their religious leaders stop encouraging the most violent Muslims to kill and maim “infidels.”

To me the Hitler analogy is appropriate. If the majority of Germans were against the murder of 6 Million Jews, how did it happen right under their noses? Did they think the Nazis were herding their neighbors into cattle cars with machine guns to take them on vacation? To prove this point, many Germans did understand what Hitler was doing and hid Jews to save their lives.

The “peaceful Muslims” can’t have it both ways. They can’t claim to be against violence, and continue to attend and support mosques where hate and murder is preached. Obama attended a “Christian” church where the “minister” preached hatred for America for over 20 years. Look where that got us.

Our “Commander-in-Chief” needs to make an important decision. If he is too cowardly to even call this war a war, he will not be able to prosecute it. He needs to appoint a general with both courage and military experience to the position of Commander-in-Chief and let him do the job of saving the US from ISIS and the Islamic Caliphate in general. Obama can continue his difficult tasks of destroying our economy, our health care system, and other domestic affairs.


PUBLISHER’S NOTE: The graphic with a quote from Obama that accompanies this article on our website might seem to some to be manufactured. This is not so. Barack Obama actually did say, “The future must not belong to those who slander the Prophet of Islam.” This obsequious statement was made before the General Assembly of the United Nations on September 25, 2012. It was said in the context of blaming an inane amateur video for the terrorist attack in Benghazi that killed four Americans, including our Ambassador to Libya. It was said long after he knew that it was not a mob upset by slander, but rather a targeted terror attack made by well-armed Islamic militants.

“The Religion of Peace?”
http://www.thereligionofpeace.com/quran/023-violence.htm
Obama: “The future must not belong to those who slander the prophet of Islam”
http://www.whitehouse.gov/the-press-office/2012/09/25/remarks-president-un-general-assembly

A Former Muslim Speaks Out on the Violence Commanded by the Koran
http://www.faithfreedom.org/Articles/sina/call_to_muslims.htm

VIDEO: A Former Muslim Speaks to Obama About ISIS
http://www.faithfreedom.org/isis-is-islam-a-message-to-president-obama-from-a-former-muslim-brother-rachid/

9 Questions About the Islamic Caliphate You Were Afraid to Ask
http://www.vox.com/2014/7/10/5884593/9-questions-about-the-caliphate-you-were-too-embarrassed-to-ask

Obama Claims ISIS has Nothing to do With Islam
http://www.frontpagemag.com/2014/dgreenfield/obama-beheading-by-incredibly-popular-muslim-terror-group-has-nothing-to-do-with-islam/