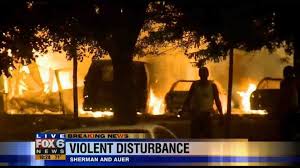 Webster defines a “Mob” as:  a large or disorderly crowd of people; especially one bent on riotous or destructive action. I actually found 64 definitions with various shades of meaning. But all of them had one common element: the word “people”.

Then I looked up “Mob Mentality”. That’s when things got interesting – and ridiculous. Listen to a psychologist justify mob activity and remove responsibility from the individual people who make up a mob:

“Social psychology does offer relevant explanations for group or mob mentality and violence. When people are part of a group, they often experience deindividuation, or a loss of self-awareness. When people deindividuate, they are less likely to follow normal restraints and inhibitions and more likely to lose their sense of individual identity. Groups can generate a sense of emotional excitement, which can lead to the provocation of behaviors that a person would not typically engage in if alone.”

Psychobabble and mental vomit. This “social psychologist” just seems to have dreamed up this drivel and then vomited it up all over her web page. She then went on to equate violent mob violence with sports or musical enthusiasm. “Think about the last sporting event or concert you attended. It’s unlikely that you would have been yelling or singing the way you were if you were the only person doing it!”

Cheering during a football game or singing along with Peter, Paul and Mary at their reunion concert are a far cry from attacking police officers, murdering people, trashing your own neighborhood, destroying cars and setting fire to businesses. The first are acts of normal people. Rioting is done by psychopaths.Webster defines a “Mob” as:  a large or disorderly crowd of people; especially one bent on riotous or destructive action. I actually found 64 definitions with various shades of meaning. But all of them had one common element: the word “people”.

Let me use the psychologist’s own words to ask you a question. Think about the last time you were at a protest gathering. Did you “deindividuate”? Did you “lose your sense of individual identity”? Did you ignore “normal restraints and inhibitions” and start burning and killing?

This will no doubt come as a shock to the social psychologists in their plush offices insulated from the real world, but I have attended a number of peaceful protests and demonstrations. Not once did I “deindividuate”; blow off “normal restraints and inhibitions”; or lose my “sense of individual identity”. Somehow, in the midst of a crowd I was able to remember that I was an individual, and that I was responsible for my own actions. And if the group had started to become violent I would have gotten my family to safety and then done whatever I could to calm tensions.

Most shocking, in none of those demonstrations did I:
1) Attack or murder anyone.
2) Destroy personal or public property.
3) Burn anything.

So what happened in Milwaukee, Wisconsin this weekend? Was the crowd of mostly young black men caught up in a powerful mob mentality? Were they swept along by in irrepressible urge to commit terrible acts of violence? Did they “deindividuate”, forget that they were individuals, and lose all sense of right and wrong? No, they knew exactly what they were doing when they responded to a call on Facebook. They knew where to go and what to do when they got there. They screamed “Black Power” and deliberately targeted white people whose only crime was to be in the neighborhood when these punks decided to commit mayhem.

The mob didn’t influence them. They were the mob. They gathered together for one purpose only – to become a violent mob. There was no mob mentality; there was a collection of coward’s mentalities. They were too cowardly to do the violent, destructive things that were in their hearts without a gang around them. But with a large group of like-minded thugs they could muster up what I call “fool’s courage.”

They also knew that in the current atmosphere the police and city officials would hold back on enforcing the law. And they were right. In the first 48 hours of rioting the police only made seven arrests. Just by watching the TV coverage I identified dozens of thugs performing criminal acts that justified arrest and prosecution.
It is obvious that the organizers had this planned for a long time. They were just waiting for a spark. That came in form of a black police officer fatally shooting a young man with a long violent criminal record. Of course, the officer didn’t have his rap sheet available at the time, but a reliable clue was the fact that he was facing the officer with a stolen gun, and that he ignored numerous lawful commands to drop the weapon. Any police officer worth his badge would have done the same thing.

The initial Facebook call to violence indicated that another white cop had killed a black man. When it became known that the officer was black, the organizers changed their narrative. First, it was "Racist white cop kills innocent black man." (The Facebook post didn’t mention that the criminal was threatening a cop with a gun.) Then they changed the narrative to “All cops hate blacks.”

In summary:
1) Hundreds of young black men responded to a call to riot.
2) The call was based on false information (which is almost always the case).
3) They arrived intending specifically to injure or kill cops and white people.
4) They destroyed the few remaining businesses in their neighborhood.
5) They were not a crazed mob who couldn’t control their violent impulses. They were a group of individuals                 who knew what they were doing was wrong, and enjoyed doing it.

What should the authorities have done? As soon as the magnitude of the riot was evident they should have requested the National Guard. It takes time to mobilize these troops and get them into position. As I often told people when I was a firefighter-paramedic and a deputy sheriff, “It’s better to call us and find that we’re not needed, than to wait to call until the situation gets worse." 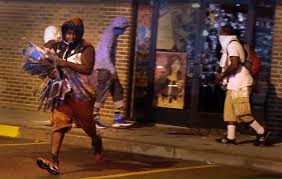 Second, they should have brought buses in and starting making arrests wholesale. Any rioter who threw a brick at a cop, injured anyone, engaged in looting, held a firebomb in his hand, or incited others to riot (a felony) should have been arrested on the spot and put on the bus for transport to the county jail. The first rule in quelling a riot is to spot the leaders and remove them from the scene.

Third, they should have had people photographing every face in the mob Many who weren’t arrested at the scene could have been tracked down through their photos and been arrested.

Finally, they should have instituted a full curfew (24 hours, not just at night) until the situation was under control. Anyone on the street during the curfew should have been detained. Most of these young men spend their days drinking and smoking dope. It’s not much of a life, but it sure beats cooling your heels in a crowded, smelly jail cell. (Since I started writing this, the city finally established a curfew the third night, Monday. There was no violence or arson that night.)

None of these common-sense measures were employed early on. If it had been a bunch of Christians peacefully protesting in front of an abortion mill, they would have been arrested immediately. This has happened dozens of times around the country. But the city fathers cowered because they were deathly afraid of being accused of racism. Well, it’s never racist to forcefully stop criminal activity that endangers the public – no matter what color the rioter’s skin.

The time for coddling criminals and giving them a pass for violence because of their skin color is over. In my mind, it is actually racist to do so. The message this sends is, “Blacks are not smart enough to know that arson and violence are wrong, so we have to give them a Get-Out-of-Jail-Free card.” That’s ridiculous. Start treating them like men – men who are responsible for their own actions – and they may start acting like men.

Stop letting these thugs hide behind the word “mob”.