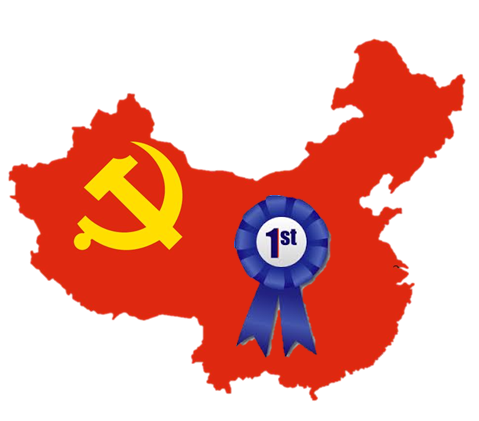 In 1980 China’s economy was 10% of the size of the US economy. In 2000 the US economy was three times that of Communist China. But today, for the first time since Ulysses S. Grant was president, America is no longer the world's leading economic power. Reuters just announced the data from the International Monetary Fund: Red China will produce $17.6 trillion in 2014; the US $17.4 trillion.

I have seen this coming for a long time, and have been preparing my readers and viewers. On my Christian Financial Concepts Webinars (www.ChristianFinancialConcepts.com) and on www.ConservativeTruth.org I have warned for years that China was overtaking us in key areas. In the last few years they have overtaken South Africa and become the world's largest producer of Gold. They also overtook India as the largest net importer of Gold. And last year for the first time they beat the US in terms of world trade.

I wonder why the White House has not mentioned this? After all, it's a pretty big deal when the world's most powerful economic power for 145 years becomes #2. Perhaps they forgot to mention it because Obama's economic, trade and foreign policies caused this defeat.

Why is this a big deal? It’s not just a matter of competition. There are a number of reasons why the economic superiority of the US is important for both America and for world peace.

1)  Economic power equals military power. The world has been far safer in recent decades because of America’s military strength. Just knowing that we had the military might to defeat them has convinced many bad guys not to even mess with us or our allies.

2)  We have been the main source of aid in many disasters worldwide. For instance, when Haiti was devastated by earthquakes, it was almost entirely US assistance that helped that nation survive. Without our help thousands more would have died and the nation could well have descended into anarchy. Can you imagine Communist China helping Haiti?

3)  World prestige. Like it or not, economic strength brings with it respect on the world stage. If we are seen as weak, we will see ourselves on the losing end of trade, economic and currency wars. And make no mistake about it, China’s success is making us look weak to both friends and enemies.

4)  World Reserve Currency (WRC) status. Currently the US Dollar is the WRC. But just barely. Not long ago about 90% of the reserves in the various Central Banks of the world were US Dollars. Now that percentage is 60% and dropping. If we lose WRC status (and unless we change course, it is certain that we will), the standard of living of US citizens will drop dramatically.

What has caused this dismal reality? Obama complains that he inherited a weak economy when he took office, and of course that was true. But my hero, Ronald Reagan, faced a similar economic situation when he took office, following a decade of rising unemployment and inflation. So how did he produce such dramatically superior results?

The Obama Plan was the exact opposite:
1)  Increasing taxes across the board.
2)  Over 13,000 new government regulations.
3)  Cutting defense spending, while increasing all other spending.
4)  Weakening the Dollar.

You don’t have to have a degree in economics to understand why Reagan’s plan worked and Obama’s didn’t. In particular, Reagan strengthened our military, which increased our economic clout. While he was campaigning in 2008 Obama promised to cut our military in half. That’s the only campaign promise he has kept.

We have lost a lot under Obama. But we can grow our way back to #1 if we follow the Reagan plan. But this means citizen involvement rather than citizen griping. Instead of complaining about what Obama has done to damage the nation, we need to elect senators and congressmen who will undo his destructive work – especially Obamacare.

Regardless of whether the US is #1 or #2, it's good to know that we are first and foremost citizens of a Heavenly Kingdom that will ALWAYS be #1 in every way!


NOTE: If you'd like to know what's happening before it happens, go to www.ChristianFinancialConcepts.com and Subscribe for the free weekly Financial Education Webinars. These are taught by some of the greatest teachers in the world, including best-selling authors and leaders in all areas of economics and personal finance.