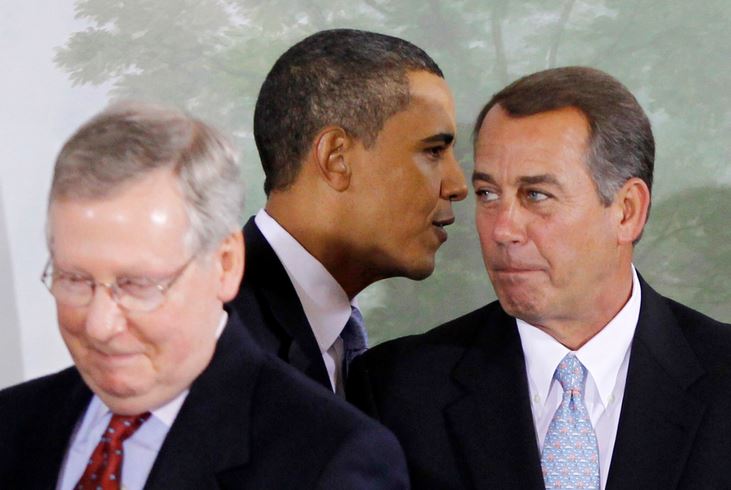 Answer: Obama – but not by as wide a margin as you would expect or hope.

“But aren’t Republicans conservative?” Some are. But the top two Republican leaders definitely are not. They should both be replaced. But there aren’t enough Republicans that are both conservative themselves and also have the courage to vote against the establishment to get these two removed. A good number of House Republicans tried to vote Boehner out last week; and they are being persecuted for taking that stand.

Immediately after taking office, Obama shut Republicans out. He didn't consult with them or listen to their ideas. When asked "Why?" he said, "Elections have consequences." John Boehner and Mitch McConnell don't seem to understand this. Even though Republicans overwhelmingly swept both Houses in November, these Republican "Leaders" act like they lost!

Republican voters see little difference between these two men and Obama. According to a recent poll, 64% of them want Boehner replaced as Speaker; and 53% don't want McConnell to be the new Senate Majority Leader. More important, when asked if they wanted BOTH to be in their positions, 84% said NO.

So why were these two elected by their party to be the top Republican leaders? Because the leadership has the power to punish members who don't bow to their will - and they use it. For the crime of listening to their constituents and voting their consciences, everyone who voted against Boehner will feel his wrath. Several have already been removed from their committees, and more heads are due to roll.

The most Conservative Members in both the House and Senate want these two gone. But most are afraid to vote against them because they carry the big stick. Why do Conservative Republican Senators, Congressmen and voters want the leaders replaced? Three reasons:

1) They are not Conservative.
2) They are afraid of Obama.
3) They haven't figured out that they won!

They should take a page from Obama's own book, and tell him, "Elections have consequences." They should listen to the voters who sent them to Washington and push a Conservative agenda. But since both Boehner and McConnell are wishy-washy appeasers, the members should vote them out and replace them with Conservatives who respect the Constitution.