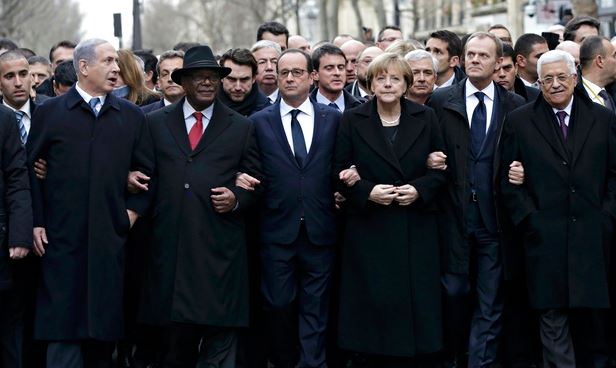 Obama decided not to show up for the Paris “We don’t Like Terrorists” photo opportunity. World leaders are outraged, and supposedly the terrorists are giddy with glee because the leader of the free world was a no-show for this “Solidarity March.” My question is not why Obama chose not to participate, but why the march wasn’t held in Israel.

I realize my take on this is much different than that of most Conservatives. Possibly that is because many of them look at every situation to find an angle with which to criticize the president. Perhaps it is a knee-jerk reaction to support anything that seems to be anti-terrorism. But I see this march as an empty gesture: “We’re against terrorism!” Who isn’t? Primarily the problem is that the march failed to place the emphasis where it belongs.

Why not gather world leaders and march in Jerusalem, where terrorist attacks occur on a near daily basis? Why Paris, which has only gotten a taste of what Israelis constantly live with? French citizens don’t sleep with gas masks on their bedside tables. The French aren’t surrounded by murderous Muslims on three sides and the sea on the fourth. Imagine the outcry if any nation declared that France has no right to exist. Yet many Arab nations have said this of Israel with practically no opposition.

Why is France so special that our president should rush on a moment’s notice to a march because of two small-scale terrorist attacks? Thousands of Israelis have died in rocket and suicide attacks, but no one threw them a march. Instead, France and most of Europe regularly condemn Israel at the United Nations and in the press for protecting themselves against Palestinian terrorists.

Does France believe it deserves special consideration because it is such a great ally of the US? It is an ally, but in my humble opinion Israel has been a much better and more reliable ally than France or any of the European nations, save Great Britain. Is it because France does a lot of trade with the US? I suspect that may be a factor, but it shouldn’t be. I certainly hope it is not because of Frances’s attitude that the Jews are “different from us” and therefore not worthy of the same consideration.

I think that their time and energy could have been far better used in meeting in private and devising real strategies to effectively crush Muslim terrorists. Don’t these “world leaders” understand while they dance around the real issues in their politically-correct fantasy world, real terrorists with real capabilities are making real plans to take over the world and turn it into a Muslim Caliphate?

So march on. Dream on. Continue to pretend that Islam is a “religion of peace” and that all we have to do is find the right argument to convince madmen that they are interpreting the Koran incorrectly.

But if you decide to do another march, consider doing it where it might really matter. Have it in Jerusalem where it would show the Arabs and Muslims that the West stands with our only true ally in the Middle East – Israel.