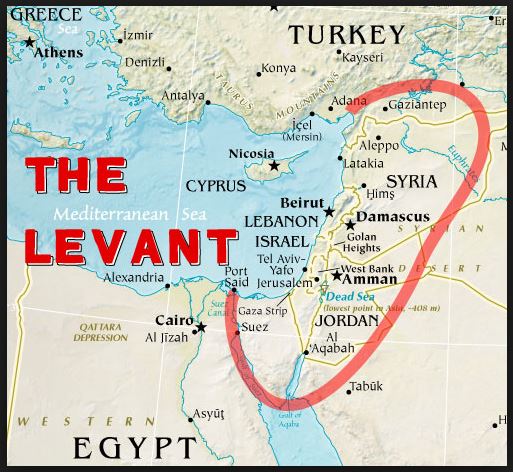 Obama, along with most Liberal news outlets, and the Muslim propaganda Al Jazeera TV network, prefers the acronym ISIL. Most of the rest of the world refers to the group as ISIS. What difference does it make?

Well, whenever Obama and Al Jazeera agree on something it is worth a second look. Both are apologists for Muslim terrorists, and both criticize Christians and Jews whenever they see an opportunity.

(By the way, an interesting historical footnote about Al Jazeera. Ex-Vice President Al Gore formerly owned the network – then named Current TV– which was a failed Liberal indoctrination machine. Glenn Beck offered to buy the network. Gore refused his offer because Beck’s Conservative viewpoint was at odds with Gore’s beliefs. Instead he sold it to an Islamic network that “hates America and runs every terrorist video.” Beck says he would have paid more for the network than the Muslims, but was not permitted to bid on it.)

So, where do the names ISIS & ISIL come from? The original name the terrorists gave themselves in Arabic was Al-Dawla Al-Islamiya fi al-Iraq wa al-Sham. The first three words translate to the Islamic State of Iraq while “al-Sham” refers to Syria. So, ISIS = Islamic State of Iraq and Syria. Their stated goal is to restore an Islamic state; or caliphate, in the entire region.

What about ISIL? This stands for the Islamic State of Iraq and the Levant. The roughly defined region around Syria (see map) is historically referred to as the Levant (an archaic French phrase for the “lands of the rising sun”), which includes modern-day Syria, Lebanon, Israel, Palestine and Jordan. The Obama administration claims that it uses the acronym ISIL as it believes the word “Levant” to be a more accurate translation from the Arabic name.

So the question is: Why do the president, Al Jazeera and the Liberal news media all insist on using a name that the group itself did not invent? Remember, when we first learned about them everyone used the name ISIS. The first time we heard ISIL was when Obama started using the term and ordered all his minions (including the State Department and the Pentagon) to start using the name.

Could it have something to do with the fact that Israel is one of the nations in Obama’s version? Remember, the Levant includes Syria, but adds Lebanon, Israel, Palestine and Jordan. We know that Obama has been the most hostile president towards Israel we have ever seen. We have watched him keep the Prime Minister of Israel sitting in the waiting room for over an hour, something that is never done. And recently he has announced that he will not meet with the Israeli leader when he visits Washington to speak to Congress.

Obama has to pretend to support Israel. Failure to do so would be like saying he hates Great Britain. But the facts, including his actions, make it clear that Obama does not support Israel when the chips are down. As a result, for the first time in decades, the majority of Israelis do not believe the US will support them when they are in danger.

So, why would the term that includes the destruction of Israel be preferable to Obama over the one that simply has the terrorists taking over Iraq and Syria?

As foolish as Joe Biden is, I don’t think he would have ignored the advice of the Pentagon and pulled all our troops out of Iraq. But Obama’s ego is so huge that he refused to leave even a small residual force to keep the peace in Iraq. As a result we hear the pain in the voices of our veterans who left parts of their bodies and watched fellow soldiers die to win cities and ground in Iraq, as they watch Obama allow terrorists to retake that ground. They ask, “Was all our suffering in vain?”

His second major blunder was his failure to do anything more in Syria than draw a “red line” which was promptly crossed with no consequences. Richard Cohen, writing in the Washington Post said, “The ‘Obama doctrine’ in Syria does not seem to be working. The country has fallen apart. Matters have gone from bad to worse. The secretary of state suggests that things are so bad Barack Obama has asked for ‘options.’ Three years into the war and the president wants a plan!” So basically the “Obama Doctrine” was to fumble around for three years before deciding he needed a plan.

Obama’s other reason for including Israel in the sphere of the “Islamic State” could have serious consequences for the United States. My take on Obama is that he is lazy and just wants problems to go away so he can spend his last two years playing golf and taking multi-million dollar trips to Hawaii.

What would be simpler for him than to have a “peaceful” Middle East that was controlled by guys so bad that no one would go up against them? We have seen numerous precedents. The Western nations sat back and allowed Russia to gobble up dozens of nations, until Ronald Regan and Margaret Thatcher finally said, “Enough.” There were parts of New York City where even the cops were afraid to go until Rudy Giuliani said, “We’re taking back our city.”

Would even Obama be so evil as to allow allies like Israel & Jordan to be overrun by ISIS so that he could get back to working on his golf swing? I sincerely hope that is not the case. He has made his antagonism toward Israel clear. But would he sacrifice them for a false peace?

I think his constant use of the ISIL phrase could be a signal to the terrorists that they can have the Levant (including Israel) as long as they stay in the Middle East and leave us alone.

I know it sounds unbelievable that any president could be this duplicitous, but look at the facts. He has undermined Israel in international relations. He has offered only token support to the pitiful coalition that is fighting ISIS. (See my February 8 article, “Obama Totally Mystified about What Motivates ISIS." In it I quote from a Wall Street Journal article that points out that we flew 1,100 air attacks daily during Desert Storm in 1991, and 800 daily in 2003 when we took down Saddam Hussein. In the last two months we have flown a pitiful 7 missions a day on average. These are not the actions of a president who wants to defeat an enemy.)

I pray that Obama’s antipathy toward Israel doesn’t lead him to make a stupid mistake that would put our nation in jeopardy. We can never forget God’s words to His people Israel in Genesis 12:3 – “I will bless those who bless you and curse those who treat you with contempt.”

Obama's Use of ISIL, Not ISIS, Tells Another Story
http://www.thefiscaltimes.com/Blogs/Peek-POV/2014/06/23/Obamas-Use-ISIL-Not-ISIS-Tells-Another-Story

Why Obama’s use of the term ISIL instead of ISIS is actually really important
http://www.glennbeck.com/2014/09/15/why-obamas-use-of-the-term-isil-instead-of-isis-is-actually-really-important/