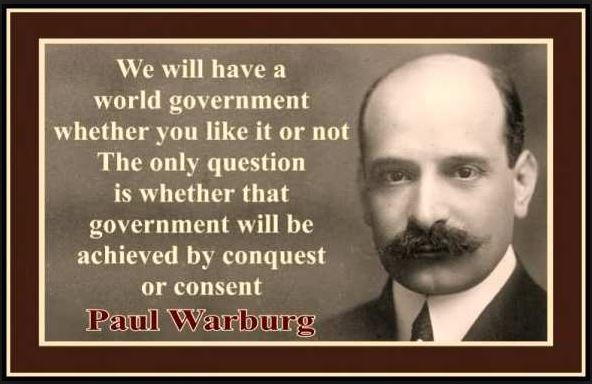 Paul Warburg was the financial advisor to FDR, who took the US off the Gold Standard (by Executive Order!) and started us down the road to Socialism. Warburg had the nerve to utter these treasonous words in a speech to the US Congress on Feb. 17, 1950: "We will have a world government whether you like it or not."

Obviously 65 years have passed since he gave his dire prediction, and we are still fairly free. I qualify my words because the US has signed on to many treaties that limit our freedom and give the UN and other nations far too much control over us. But we are still basically a sovereign nation.

The problem is that, although Warburg has passed on, his ideas have not. We still have many traitors in this country who are actively working to move the US into a world government system. Both the Democrat and the Socialist Parties of the US have made statements favoring more international control of our nation.

I don't see world government coming by conquest. I see Nikita Kruschev's prediction as the more likely method: "We will bury you without firing a shot. We will destroy you from within." With cowardly politicians and liberal university professors leading the way, we may well see American sovereignty lost to a world government.

The first step, of course, is to extricate ourselves from the United Nations (UN). There are 196 countries in the world, of which 192 are members of the UN. We are, of course, only one nation, but we pay for more than half the costs of the UN. We are one of the world’s largest nations, and (until recently) had the world’s largest economy. But neither of those justifies our nation paying more than the other 191 nations combined.

So what do we get for our money? Well, we are one of the Security Council nations, which gives us a veto on important matters. But there are 14 other nations who have the same veto power, and most of them pay little to nothing. There are five Permanent Members, including the US, China, France, Great Britain and Russia. (Russia took over the seat of the USSR after the breakup of that Evil Empire.)

The main thing the General Assembly seems to spend its time on is passing Resolutions condemning the United States or Israel for various imaginary sins and slights. It also spends billions of dollars (most of it from US taxpayers) on various useless commissions. It, like the Security Council, is very political, meaning very Liberal. Its main goal is redistribution of wealth; getting the wealthier nations to give as much money as possible to the poorer nations.

To give you just a small taste of the important work of the United Nations, the UN Human Rights Council includes notorious human rights violators such as China, Cuba, Libya and Saudi Arabia. In November of 2010, this prestigious Council used an entire session to berate the United States for alleged human rights violations.

Indonesia, a Muslim nation which makes it almost impossible for Christians to build churches, chided the US for not being more religiously tolerant. Mexico, which jails US citizens in brutal conditions on frivolous charges, complained the US engages in racial profiling. China, which has more political prisoners than all of the Western nations combined, griped about the US holding “political prisoners” in Guantanamo Bay. Russia, which officially “suspended” the death penalty in 1996, said that the US was barbaric because we still execute murderers. (Russia, of course, still executes prisoners. They just do it secretly, so they can claim the moral high ground.)

Another problem with the UN is that the US has been violating long-standing policy and tradition by allowing our troops to be placed under the command and control of foreign officers, many of them UN operations. There are serious constitutional questions about the legality of a US service member being placed under the authority of a foreigner.

A recent example was when US troops were put under the command of Afghanis. Ally or not, Muslim Afghan troops have far different value systems than those of the United States. They have been known to be particularly brutal and inhumane in battle, and to regularly violate the Geneva Conventions. If I were still in the Marine Corps and was ordered to serve under an Afghani officer, I would refuse to do so. And I would likely suffer the same fate as Michael New who was discharged from the service for doing so, and for a long time not even allowed to return to his own country. His case is still under appeal (see article below).

US troops serving under UN control is just another way we are losing our sovereignty. I could give you hundreds of examples of treaties and agreements where we are ceding authority over our own lands to the UN or other nations. There are thousands of examples in which US courts have used citations of decisions made by international courts or those of other nations. The most frightening of these have been dozens of cases where US judges considered the very barbaric Muslim Sharia law in deciding cases in US courts.

Little by little, step by step, we are giving up our sovereignty. We only have to look to the European Union (EU) to see the result when that happens. The Supreme Court of a European nation can rule in a case, but can be overruled by the Court of Justice of the European Union. A nation can set interest rates that allow it to prosper. But the European Central Bank (ECB) can change them, and the nation can do nothing about it.

I have been sounding the alarm about this for more than 20 years. Let me state it very clearly: The United States is in danger of losing its sovereignty. We are in danger of being neutered like the nations that were foolish enough to join the European Union – and are nations no more.

Warburg may be dead, but there are true believers in the Democrat and Socialist Parties of the US (as well as, unfortunately, some Liberal Republicans) who are trying their best to make his prophecy come true. They have tried for years to push through a North American Union, a merger of the United States, Canada and Mexico, that would be similar to the EU.

When that failed they proceeded to implement parts of the plan, with the ultimate goal of forcing us to join the Union. Space is limited, but one of the provisions that has been quietly implemented is one that allows commercial vehicles from the three nations to cross once another’s with practically no inspections. Mexico’s maintenance standards and laws are notoriously poor, so expect more accidents. Their insurance laws are of course much weaker than ours, so expect the people injured by the Mexican trucks to receive little or no compensation.

And, of course, there is the problem of the transportation of illegal persons and objects. We already see drugs, terrorists, and illegal aliens crossing our borders by the thousands daily. Now, instead of hoofing it across the desert with a backpack and a canteen, they will be able to ride in relative comfort in the back of a truck – with perhaps some boxes of products in front of them in case a US Border Patrol agent actually opens the rear doors.

America is in serious danger. America needs to wake up, pray, and fight to stay an independent nation.

US Opens Its Borders to Mexican Trucks
http://www.utsandiego.com/news/2015/jan/12/nafta-trucking-measure-implemented/

Karl Rove says (falsely) that “American troops have never been under the formal control of another nation”
http://www.politifact.com/truth-o-meter/statements/2011/mar/29/karl-rove/karl-rove-says-american-troops-have-never-been-und/

Why Should An American Soldier Don Un Insignia?
http://integraonline.com/~bonville/Constitution/DennisCuddy.html