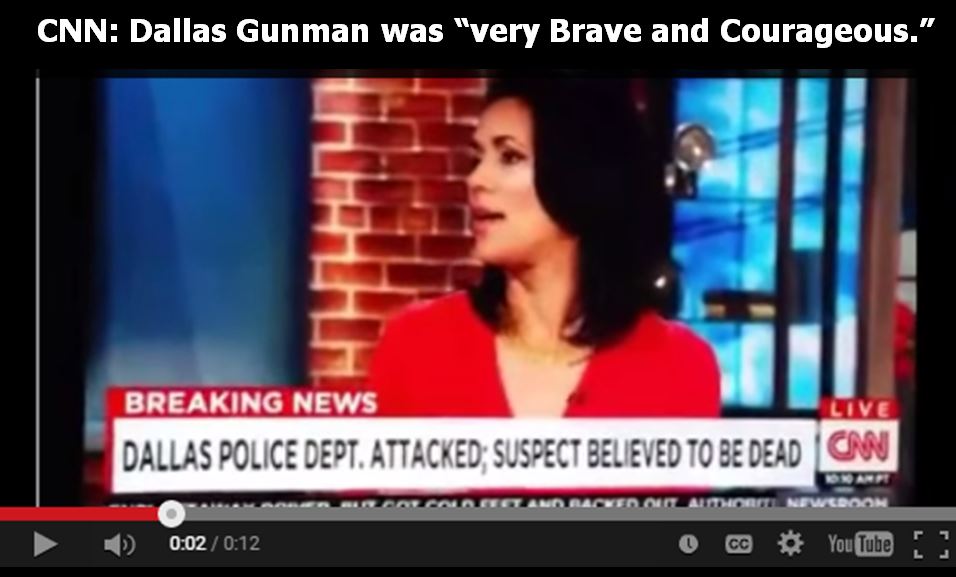 I have always referred to CNN as The Communist News Network because their “commentary” consistently leans toward the anti-America, Socialist, far-left point of view. On June 13 one of their anchors confirmed my assessment by labeling the terrorist who attacked Dallas Police Headquarters “very courageous and brave.”

When I went to CNN.com a few hours later, they had already removed the footage of the offensive remarks by Fredricka Whitfield. This is probably because the Dallas police denounced her remarks within hours of their airing and called for an apology.

Interestingly, even though she is the anchor of CNN Weekend (and presumably many videos of her work exist), ALL videos of Ms. Whitfield have been scrubbed from the site except for a puff piece in which she claimed, “I Am America." So the video of her making her outrageous remarks that you will find below is posted on Beitbart.com.

Her remarks were made in the context of and interview with Phillip Holloway, a criminal defense attorney. In it you can clearly see his smile drop when she makes her offensive remarks praising the gunman. He then makes it a point of praising the Dallas Police and their professional response. I’m glad he did that, but I think I would have taken it a step further had I been in his place. I would have called her out on the spot and asked her to apologize to the police.

If he had done that he probably would never have been invited on CNN again, but that would have been a small price to pay to see her arrogance deflated and to be the one to stand up to CNN, a corporate giant which tramples on America and the views of its citizens daily.

On the other hand, I believe we will see the “Blue Wall” go up with regard to CNN, at least until they apologize for allowing this reporter to praise an intended cop-killer on national television. I would be very surprised to see any police official grant an interview to any CNN reporter until this is rectified.

James Boulware is the coward who showed up at Dallas police headquarters with the clear intention of killing cops. Let’s examine just how “very courageous and brave” he was.

He arrived in the middle of the night in an armored van equipped with gun ports (small holes through which he could shoot at the police without being exposed to gunfire himself.). Sometime before he began his rampage he planted several explosive devices around police headquarters, at least one of which exploded. He was armed with high powered weapons and enclaved himself safely behind armored walls.

Now let’s examine how “very courageous and brave” the Dallas police were. For the most part they were armed with handguns (until a sniper team was brought in). Without armor (except for those wearing vests) they defended themselves and the community bravely and courageously. They even counterattacked this armored vehicle at great risk to their own lives. They finally took out the shooter by firing through the only vulnerable point on the vehicle – the windshield, from which he could clearly see them.

That’s what I call “very courageous and brave” – not the actions of a coward who plants bombs along the walkway he knows police will use when responding to his attack, and who hides in an armor-plated van while firing hundreds of rounds at police officers.

I know that Al Sharpton, both our most recent US Attorneys General, Stephanie Rawlings (the Mayor of Baltimore) and the president have made it fashionable to hate police and blame them first in every incident. This has put the lives of police officers in every city and village across America in danger. And I hope that Obama and Sharpton lose sleep every time an officer is ambushed and killed, knowing they helped create the toxic environment that emboldened the shooters (including the Dallas shooter).

Obviously there are some bad cops, just as there are bad apples in every profession. (I believe the latest studies show 1% bad cops, 50% bad politicians and 50% bad reporters.) But the vast majority of police get up for every shift, put on the uniforms that make them a target, and kiss the spouses goodbye knowing full well that they may die that day and never see their families again. That’s what real Americans consider to be “very courageous and brave.”

I hope that CNN will do what they never do: Make this woman personally and publicly retract her remarks and apologize to the Dallas police. No spokesmen. No written apology read by someone else or Tweeted out. Make her face the camera and the nation - admit that her words were stupid and hurtful.

In researching this article I found a Tweet containing a name for CNN that is perhaps more apropos than mine: the “Crazy Nuts Network.” What’s your favorite name for CNN?