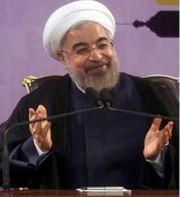 With that smile, he looks like everyone's kindly old Uncle Mohammed. But this man is in charge of the most evil and dangerous nation in the world. His name is Ali Khamenei; he is the Supreme Leader of Iran. And our president thinks we should trust him.

Here are six reasons why we shouldn't and why you should call your representative and tell them to do whatever they have to do to make sure Congress reviews any deal before it is made public...

1) Iran has signed dozens and dozens of international treaties, and has never kept one. Not one! That certainly inspires trust. (See LINK below: “Details of Iran’s Violations of International Treaties.”)

2) They insist that their nuclear programs are only for peaceful purposes. Yet they are doing things that could only be used for nuclear bomb making - things that Obama himself said we would never allow. But he is about to sign a treaty that would allow Iran to have a nuclear bomb within one year - perhaps less.

3) They say they mean harm to no one when they're speaking to the media in English. But when they speak to their own people in Persian it's still "Kill Americans!" and "Wipe Israel off the map." Iran is the major terrorist nation in the world, but the Liberal news media doesn’t report this. They claim that’s because Iran doesn’t engage in terror directly as much as some other nations. They just finance the terrorism of other nations and groups.

4) The deal that Obama wants to sign would give Iran an immediate bonus of at least $50 Billion dollars that will help them develop nuclear weapons and inter-continental missiles, and also continue to pursue their favorite hobby – financing international terrorism. “This could be the largest cash infusion to a state sponsor of terrorism in modern history,”according to terrorism expert Jonathan Schanzer. (See LINK below.)

5) If they truly do want nuclear power for energy only, why are they developing long-range ballistic missiles that could reach almost every major American city? They already have missiles that can reach Israel. There is no doubt that they are gearing up to harm America. Whether they intend to actually bomb us, or just want to use their ability to do so for blackmail, we cannot allow this to happen.

6) Obama claims there will be “stringent inspections” in the deal that will insure Iran’s compliance with the agreement. Iran has agreed to inspections before, but it has never complied. Armed soldiers have blocked inspectors from entering buildings already scheduled for inspection. They have disabled cameras installed with Iran’s permission in their facilities to monitor activities. And they flatly refuse to even negotiate on the subject of surprise inspections. What good is an inspection if we have to warn them ahead of time so they can hide evidence?

Any teenager could do some basic research and discover the facts I have laid out above. So why does Obama trust Iran to negotiate in good faith? Either because he's crazy or because he's on their side. There's no other explanation.