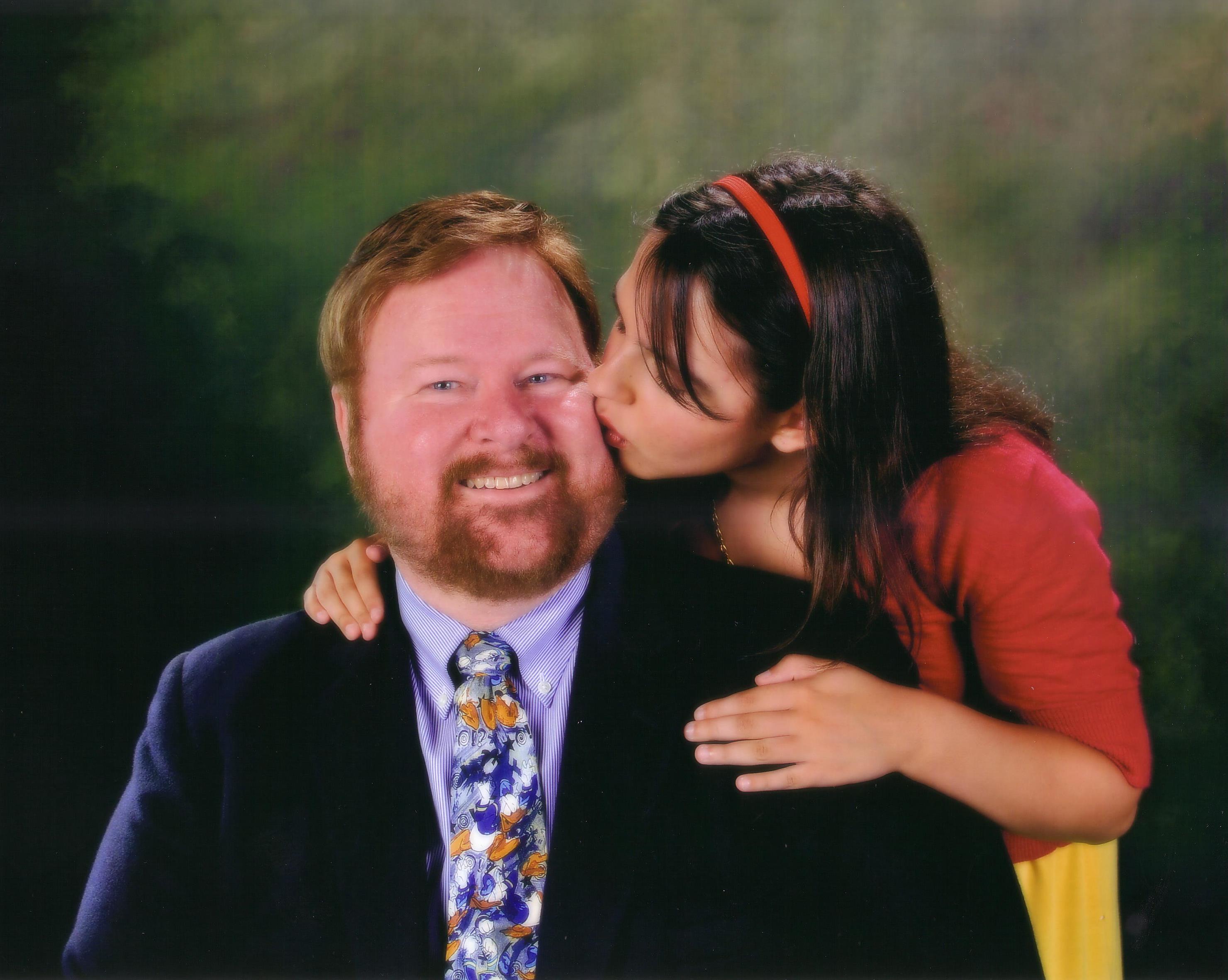 My daughter Sarah knows that I admire Winston Churchill, so she gave me a book about him for Father’s day. More important than the book was a greater gift – the inscription she wrote on the flyleaf. “If there was a Papi Hall of Fame, you’d definitely be in it. I love you.”

Now, I don’t have any illusions about being one of the best fathers in the world. I try, like all of you do, but I often fail. But what’s important is that my daughter thinks her Papi is a great father. That means that I must have done something right. More important, it means that along our journey together as father and daughter our love for one another has defined our relationship.

It’s not easy being a father. You have to make thousands of decisions, all of which will impact your child or children and your relationship with them. If nothing else in your life drives you to prayer, fatherhood will. What advice do I give my child? How do I answer their millions of questions? What about discipline? Do I let them slide when they do something wrong, or do I punish them so they will learn to be a better person? Where’s the child-rearing instruction manual when you need it?!

I once read an article that stated that aeronautical engineers have proven scientifically that bumblebees can’t fly. Yet they do fly. By the same token, some people have given up hope that they can raise their children to be adults of whom they can be proud. The odds against them are too great. Just look at the teen suicide rates, the gang violence, the teen pregnancies and abortions, and this generation’s lack of respect for their parents and authority in general.

It’s hopeless, some say. But some dads are like bumblebees. Although it seems impossible, with God’s help many fathers are raising children that anyone would be proud to call their own. What’s their secret?

Of course, mothers play a huge part in successful parenting. But fathers have special responsibilities to their families, and Mother’s Day was last month. So today we’ll concentrate on what dads can do to ensure that their kids grow up as victors instead of victims or villains. This will not be a “pat Dad on the back because fathers are great” article. Instead it will be a discussion about how we fathers can better fulfill our responsibilities to our children.

But first, the bumblebees. In the early days of aeronautics, some engineers did studies on them. Based on the surface area of the bee’s wings, the weight and shape of the insect, and the amount of muscle force it had available, they determined that it was impossible for bumblebees to fly!

"Engineers say they can prove that a bumblebee can't fly," said Michael Dickinson, a biologist at the University of California, Berkeley. "And if you apply the theory of fixed wing aircraft to insects, you do calculate that they can't fly.” In other words, they are not airplanes, so you can’t use aerodynamic principles to study bumblebees.

By the same token, if we accept conventional wisdom concerning our children, all we can realistically do is try our best, “be there” for our children, and hope that somehow they turn out all right. That didn’t work out well for the parents of the Columbine School murderers or the parents of the young man who murdered nine people in a South Carolina church last week. It doesn’t work for the thousands of parents who are bewildered when their children turn to witchcraft and Satan worship. And it sure doesn’t work when kids come home and tell their parents, “I’ve discovered that I’m a homosexual (or a lesbian).”

So, in the words of Dr. Dickenson, “You have to use something different.” In the case of child-rearing, that “something different” is not something new. For thousands of years parents have raised great kids using principles found in what I like to call “The Owner’s Manual,” otherwise known as the Word of God. God made us, so he certainly knows how to maintain us, and He has been gracious enough to share all His wisdom with us in the Bible.

One Sunday an elder in in a church I pastored asked a rhetorical question, “What is Satan’s religion?” Good question. Many people would say that, being Satan, he has no religion. But in fact, he has founded his own religion. It is preached in all of our public schools, and, unfortunately, in many organizations that call themselves churches today. It is the religion of secular humanism.

We could spend hours describing secular humanism, but in a nutshell it is a man-based religion centered on “me, myself and I.” Man’s needs, man’s wants and man’s desires are all that are important. We have to take care of one another above all else. This religion may sound charitable and generous, but it is completely selfish. Man is worshipped, and God is forgotten. Sadly, most modern-day concepts of parenting have come from this religion. Some have even crept into actual churches.

We are told that, at all costs, children must be free to “express themselves,” without any hindrances from outside authority. So children are allowed to shout at their teachers, wear clothing with filthy words on them, and disobey their parents, because stifling their “creativity” might cause irreparable psychological harm. Hogwash!

Child psychologists tell us not to punish children. More hogwash! Parents who abdicate their responsibility to teach their children right from wrong are cowards. They are afraid of everything: afraid of being politically incorrect; afraid of being compared to more liberal parents (“Susie’s daddy lets her…”); afraid their kids won’t love them.

And we are warned that we should not attempt to influence our children’s decisions regarding religion. They should be allowed to “choose for themselves.” Worse hogwash! If we don’t teach our kids about the Word of God, on what will they base their decisions?

Well, that’s enough of what the religion of the world, secular humanism, has to say. I’m getting nauseous. Why don’t we look at what the Bible says about how fathers should raise their children? After all, God is the greatest Father of all, and he has been teaching fathers here on earth how to successfully raise their children for thousands of years. Even if you are not a Christian, listen to wisdom from the Word that will help you be a better father.

First, as I mentioned at the beginning, fathers have special responsibilities in the family. In Ephesians 5:23 and in many other places, God makes it clear that fathers are responsible for the spiritual instruction and well-being of their families. Of course, if the father is absent, or refuses to fulfill his God-given role, the mother must step in. But God’s plan is for us to have intact families in which the father serves as a loving servant priest to his wife and children.

Second, scriptural discipline is mostly about training. We associate punishment with the word “discipline,” but God teaches us that discipline primarily involves proper training for our children. If we train them the way the Bible teaches us to, they will grow up to be strong and loving adults. Proverbs 22:6 says, “Train a child in the way he should go, and when he is old he will not turn from it.” This clearly debunks the secular humanist concept mentioned above that we should allow children to somehow drift into whatever spiritual place will make them comfortable. Ephesians 6:4 tells fathers regarding their children to “…bring them up in the training and instruction of the Lord.”

There has been a lot of talk in recent years about the “epidemic” of mass shootings. Both the president and Hillary Clinton tried to take advantage of the church shooting to decry the “fact” that America has more shooting than other “advanced nations,” and that we should therefore repeal the Second Amendment. But as Mike Huckabee pointed out yesterday, gun deaths have decreased by 49% since 1993. There have been many mass murders in “advanced nations” in the past ten years. And our news media has made it seem that there are more tragedies than there are by showing them over and over and over 24 hours a day.

But there are mass murders, almost all of which are perpetrated by young men. And all of them have one thing in common: Absent fathers. Sometimes the father is physically absent or (almost as bad) emotionally absent. Sometimes he is there, but he refuses to step up and take his responsibility as a father seriously.

In Malachi 4:6, the Bible says that God will “…turn the hearts of the fathers to their children, and the hearts of the children to their fathers.” That’s what happens when fathers accept the role and responsibility God has given them.

Have a blessed Father’s Day!


SPECIAL NOTE: My daughter, Sarah, just turned 18. She told me how excited she is because she will be able to register to vote. Sarah is a great writer, so I asked her to write about voting from a young adult's perspective. Please check out her first article on Conservative Truth on our website: "I Get to Choose the Next President!"

I Get to Choose the Next President
www.conservativetruth.org/article.php?id=4621

What Do All Recent School Shooters Have in Common?
http://www.iwf.org/blog/2792779/What-Do-All-Recent-School-Shooters-Have-in-Common-