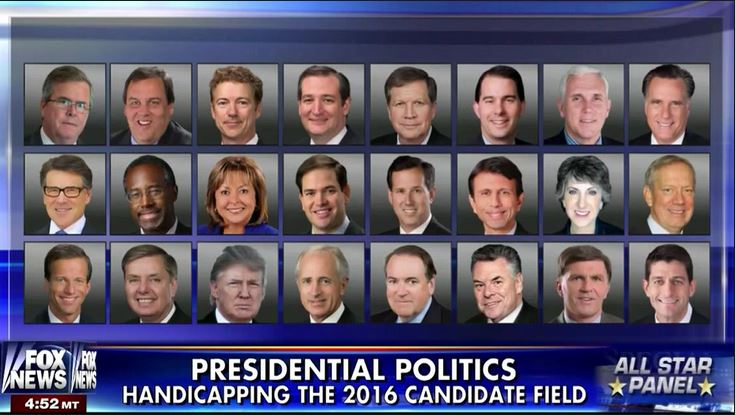 Out  of the hundred or so Republican Candidates for the 2016 race, a number are saying that only a governor could possibly have the requisite experience to be president. Of course, all those who believe this are governors themselves. But we hear this same mantra every election cycle, so let's examine it.

First, there have been lots of governors who have won the White House. Some have been great, the best example being Ronald Reagan. But Jimmy Carter was also a governor. Need I say more?

Second, at the time of their elections the majority of presidents in modern times have been sitting Vice-Presidents, Governors, Senators, Congressman, or Military men.

This week I heard New Jersey Governor Chris Christie take a not-so-subtle jab at Senator Marco Rubio. After saying that only governors should be considered for the White House, he talked about "young senators" imagining they could run the nation, and then brought up the “young senator” who has been such a disaster for our nation - Barack Obama.

While it is true in general that "governors lead and senators debate," not all senators were community organizers before they were elected. Marco Rubio, for example, was the youngest Speaker of the House of the Florida House of Representatives - and a very effective one, at that. He was a leader then, and he has been a leader in the Senate.

What about military leaders and other non-political types? Personally I like the idea of people who haven't worked in politics running for president. General Dwight Eisenhower was a military hero with no political experience. He was much more qualified to be Commander-in-Chief than anyone running today from either party.

And what about business leaders? Can anyone deny that we could use someone with a good business head in the White House? Carly Fiorina ran a huge company, and increased its profits dramatically. Isn't that preferable to someone who has added more to the National Debt in six years than our first 42 presidents did in 225 years? Ben Carson is another non-politician who would be a great president. One of the biggest issues facing us today is the crisis in health care that has been made much worse by Obamacare. Wouldn't it be nice to have one of the nation's greatest physicians (who is also an unabashed Conservative) running the country?

By writing this I am not endorsing anyone or even favoring anyone today. I just want to point out that any one of the declared (and many of the undeclared) Republican candidates would do a better job than Hillary. They don't need to be a Governor or even have any political experience. A Republican or Libertarian dogcatcher who respects the Constitution would be a much better president than Madam "What Difference Does it Make!"

Let’s close by taking a quick look at the prior professions of the people who were elected to the presidency in our first 43 elections. (I realize there have been 42 presidents, but two of them were the same man. Grover Cleveland served one term, was unseated by Benjamin Harrison, and then was elected again to serve one term.)

My methodology was to look at the most common prior professions of the men who have been elected. These were Vice-President, Governor, Senator, Congressman, Businessman, Soldier, Lawyer, and Teacher. There were also a few other interesting (but statistically insignificant) professions which included actor, journalist and inventor. They had between one and five prior primary professions, with the average being three.

Sadly, the most common profession was Lawyer. Twenty-seven of the presidents (61%) had this background. Throughout our history lawyers have dominated all three branches of our government, generally to our detriment. I was heartened to see that seven of our presidents had been teachers before their elections, and eight (including Abraham Lincoln) had been businessmen.

Now, to debunk the theory that only governors or senators should be considered, I found that twenty former Congressmen had served, while only fifteen each had served in one of these three offices: Governor, Senator and Vice-President. The honorable profession of Soldier beat every category, with thirty-three former professional Soldiers (77%) serving as president. In fact, it has been an oddity for a man to even run for the office if he had not shown his patriotism by serving in the military. Two of our worst presidents (FDR and the current occupant of the White House) have been men who considered themselves too important to serve in the military.

What does all this mean? There are many paths to the Oval office. Some of our best presidents have been former Vice-Presidents or other elected officials; the same could be said of some of the most pitiful examples of humanity who have held the office.

As I mentioned, when General Dwight Eisenhower was elected president, it was his first public office – yet he was a great president. Two other men who never held office before were Taft (a university dean) and Hoover (a mining engineer); both served with distinction. Likewise, George Washington was a businessman and a soldier who had never held public office – yet he turned out all right!

What the American people want most are men of character. Unfortunately, character is one of the first casualties of public office, so perhaps it is wise to look outside Washington, DC in our search for leaders. John Jay was one of our Founding Fathers and the first Chief Justice of the US Supreme Court. He gave us this advice: “Providence has given to our people the choice of their rulers, and it is the duty as well as the privilege and interest of our Christian nation, to select and prefer Christians for their rulers.”

List of Presidents of the US by Military Service
http://en.wikipedia.org/wiki/List_of_Presidents_of_the_United_States_by_military_service

Former Occupations of US Presidents:
http://www.infoplease.com/ipa/A0768854.htm