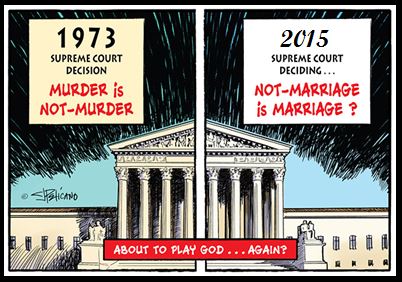 In 1973 the US Supreme Court decided it was God, and declared that it was legal to murder babies in the one place where they should be most safe - in their mothers' wombs. Now well over 100,000 babies are murdered legally - every day. Today the Supremes played God again, declaring that they knew better than God and deciding that the perversion known as homosexual "marriage" has the same status under law as normal marriage.

Supreme Court Justice Antonin Scalia, who voted against the Liberal majority, said this is "social transformation without representation."

This ruling effectively removes the rights of states to decide to follow God's plan - nature's plan - and only allow marriage between one man and one woman. It overturns state laws forbidding homosexual and lesbian marriages passed by the majority of the citizens of those states.

Remember that the Founders stated very clearly in the Tenth Amendment, “The powers not delegated to the United States by the Constitution, nor prohibited by it to the States, are reserved to the States respectively, or to the people.” Since the Constitution does NOT give the US government the power to define marriage, that right is reserved for the states. This decision tramples on the rights of the fifty states, and further strengthen the stranglehold of the federal government on every aspect of our lives. It removes even more of our freedoms.

More than anything else, this decision by a slim 5-4 majority of the Court opens the gates of hell, allowing all kinds of demonic perversions to flood our nation - legally.

Now that the Court has decided that marriage is not a union between one man and one woman, how can they refuse the other challenges that will surely come? If two men or two women can marry, why not two men and one woman or vice versa? What about a combination of five or six men and women in a group marriage?

Expect to see NAMBLA (the North American Man-Boy Love Association) take advantage of this opening the Supreme Court has provided. In case you didn't know, NAMBLA is a pedophile advocacy organization in the United States. It works to abolish age of consent laws criminalizing adult sexual involvement with minors. Their reasoning? If marriage is no longer defined as between a man and a woman, why not allow a man and a boy to marry?

And if marriage is no longer a union of one man and one woman, who is to deny the right of a human to "marry" their pet? After all, according to the homosexuals and lesbians who won this decision, the only thing that matters in determining who can marry is whether you love each other. And lots of people love their pets.

Let me take a moment to talk to the ordained and licensed preachers who are reading this. (The rest of you can read it, too.) There is no question in my mind that you will be asked to perform homosexual marriages, and that you will be persecuted if you refuse. Here is the way I see it playing out.

1)  At first the homosexuals and lesbians will just be happy that they can “marry.” They will have no problem finding amoral people who will perform these “marriages.”

2)  After a time (and that time may be short) the militant homosexual community will send couples to trap you. If you refuse to marry them, they will take action against you. That will probably be civil action: lawsuits based on the Supreme Court’s newly created “right” to “marriage equality” conferred upon homosexuals and lesbians.

3)  During this time they will be working to change state and federal laws to make refusal to marry homosexuals and lesbians a “hate crime.” Refusal at that point could result in your arrest.

I know that if I were pastoring a church today and was asked to perform a perversion of marriage, I would refuse. So would most of the pastors I know. I would go to jail rather than to violate the Word of God, as would most pastors. Obviously, some of the mainline denominations would agree to perform such marriages, since they already ordain homosexual pastors and bishops. So they won’t try to entrap these liberal ministers. They will come after you.

Thomas Jefferson said, "If a law is unjust, a man is not only right to disobey it, he is obligated to do so."

How should you go about it? First, get a statement from the leadership of your denomination or ministerial fellowship which clearly states that its members are not allowed to perform marriages that violate the Word of God. (Glenn Burris, President of the Foursquare Church put out such a directive the same day that the Supremes ruled. See the LINK below to his letter.) If you are not under the authority of such a group, I suggest that you write and publish your own statement regarding this subject. Either of these could provide some cover for you if you are brought before a judge.

Second, watch for traps. If a homosexual or lesbian couple asks for an appointment with you or shows up unannounced at your office, refuse to meet with them. If you meet with them, do not allow your meeting to be audio or video taped. Ask them to leave their telephones and tablets with your secretary. (These can easily be used to record you without your knowledge.) Require them to sign a statement that they are not there in an attempt to entrap you.

Third, consider setting (and publishing) a policy that you do not perform marriages for anyone who is not a member or regular attender of your church. Set a minimum amount of time (such as three months) that they must be regular attenders of your church before you will discuss performing a ceremony. It might be worth going to jail to have the opportunity to preach the Gospel to such a couple for three months! But in reality, instead of going through that they will probably just find another minister who is not so cautious.

Fourth, amend your church bylaws so that they prohibit you from performing unbiblical marriages. State clearly that the only marriages that may be performed in your church or by any of its ministers in other locations, are between one biologically born man and one biologically born woman. The word “biologically” is to prevent transgender people from getting around the traditional definition of marriage as “between one man and one woman.”

Most important, you should get together with the other ministers in your community. Get them to agree that they will not perform a travesty such as this. Ministers all across the nation should get together and form such covenants. They can’t arrest all of us. And if they do, imagine the impact that hundreds of thousands of preachers would have on prisons. We would see a revival in those prisons such as has never been seen in history.

Writing for the four dissenting Justices, Chief Justice Roberts, with Justices Antonin Scalia, Samuel Alito and Clarence Thomas, wrote, “People of faith can take no comfort in the treatment they receive from the majority today." They come close to calling the decision treasonous: “The majority’s decision is an act of will, not legal judgment.” Scalia separately noted that "not a single evangelical Christian" had a say in the court's opinion.

Most telling, the dissenting justices state that, “Over and over, the majority exalts the role of the judiciary in delivering social change.” This has been the increasingly dangerous course of the Supreme Court in recent years. Instead of interpreting the Constitution it has decided to change the Constitution – and, by extension, our society – in the guise of interpretation.

This is one of the most important reasons to elect Conservatives to the presidency, since they appoint the justices. Just one more vote would have saved our nation from this travesty.

Part of Justice Antonin Scalia’s scathing dissent is worth recounting: “It is not of special importance to me what the law says about marriage. It is of overwhelming importance, however, who it is that rules me. Today’s decree says that my Ruler, and the Ruler of 320 million Americans coast-to-coast, is a majority of the nine lawyers on the Supreme Court. The opinion in these cases is the furthest extension in fact— and the furthest extension one can even imagine—of the Court’s claimed power to create ‘liberties’ that the Constitution and its Amendments neglect to mention.”

Scalia explains what the title of this article states – that the Court has assumed the role of God (or Ruler, as he puts it). Instead of God being the Ruler of 320 Million Americans, he says, nine lawyers have assumed the power to create “liberties” that neither God nor the Founding Fathers ever conferred.

The Supreme Court has opened Pandora's Box. Only time will reveal the full extent of the horrors they have unleashed on America, the huge social costs, and the judgment that will surely fall upon our nation.

Let me close with a note I received from a friend, Capt. Nancy Aldrich, today. "We must pray for mercy on America on this horrible day. The Supreme Court has bent to political pressure, and ignored the facts, and legalized homosexual marriage in America. God, please have mercy on us! We have turned our backs on You, and we need to repent.

"Like many of you, I have friends who are homosexuals. I pray for their healing and salvation. But, as Christians, I believe we need to repent for America and hold her up in prayer more than we ever have before. God, please give us wisdom, courage, and strength for what is coming, and please have mercy on Your remnant in America!"

The Baptist View of Who Must Perform Weddings
http://www.bpnews.net/45049/gay-weddings-who-must-perform-them