The lettering in the window of this military recruiting installation reads: "HEROES DON'T BRAG." After Seal Team Six took out Osama bin Laden, decorated war hero John McCain used those very words to criticize Obama for bragging and taking credit for the successful mission. You never heard the Seals bragging, but you witnessed the unseemly use of the mission by the president for political gain.

This recruiting station in Chattanooga, TN pictured here, and a nearby reserve center were the scenes of a mass murder by a Muslim terrorist. (The White House, despite all the facts to the contrary, refers to him simply as a "lone gunman.") He killed four Marines and one Sailor, and 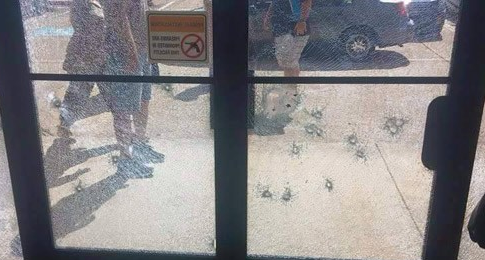 wounded others. It's probable that none of them would have died if our president was not an anti-gun, anti Second Amendment fanatic. Note the sticker on the door of the recruiting center: "This is a Gun-Free Zone." In other words, "Terrorists are welcome here."

Every one of the military victims killed or wounded was well trained in the use of firearms. But Obama's policy does not allow them to protect themselves. Since 2009 when the first Fort Hood shooting took place, almost 100 military personnel have been killed by terrorists at military installations. One of these terrorist acts took place at Fort Hood in 2014, in which a Muslim killed four.

You would think that after Major Nidal Hassan murdered 13 and injured dozens of others on the same base five years earlier, Obama would have allowed trained military personnel to carry on their bases the same weapons with which they defend us. But they are still not permitted to defend themselves, even though they have been declared primary targets by ISIS.

Obama defenders note that the policy was in place prior to his administration. What they fail to note is that this is not a law passed by Congress. It is an administration directive, and as such it could be reversed in an hour by whomever is occupying the White House. Obama may have inherited the asinine policy, but it became his when he failed to rescind it.

Six state governors have acted to protect their National Guard recruiting stations, either by arming the troops or moving them to secure facilities with armed guards. But they only have authority over the facilities under their control – namely the National Guard units, which are actually state militias. They only come under federal control when called up for national service.

But the Marine, Air Force, Army, Navy and Coast Guard recruiting facilities all come under the control of a man who couldn’t care less about them. If he did, Obama would allow them what the governors are allowing – a chance to defend themselves against Muslim terrorists.

You and I are allowed to carry weapons legally (except in Socialist enclaves like New York City). But the soldiers on Fort Hood were "protected" by civilian rent-a-cops when Hassan went on his rampage. If just one of the soldiers in the room had been armed, Hassan would have been with Allah seconds after he fired the first shot. Instead, during the time it took the "security personnel" to respond, dozens were killed or injured.

The irony of all of this is that three of the four Marines killed in this latest act of Muslim terrorism had survived multiple tours of duty in Iraq and/or Afghanistan. How did they survive in those Muslim hell-holes? They had weapons. Why did they die in Tennessee, a state where almost every home has at least one gun? Because Obama's policy requires that their guns be locked away unless they are on the firing range.

Both police officers and military personnel have been specifically targeted in ISIS posts which encourage Muslims to kill them whenever and wherever possible. Both are in danger. But the cops are armed, and the troops are defenseless. I have been both a Marine and a Deputy Sheriff. I loved being a Marine. But with Obama as the Commander in Chief, I'd definitely rather be a cop.