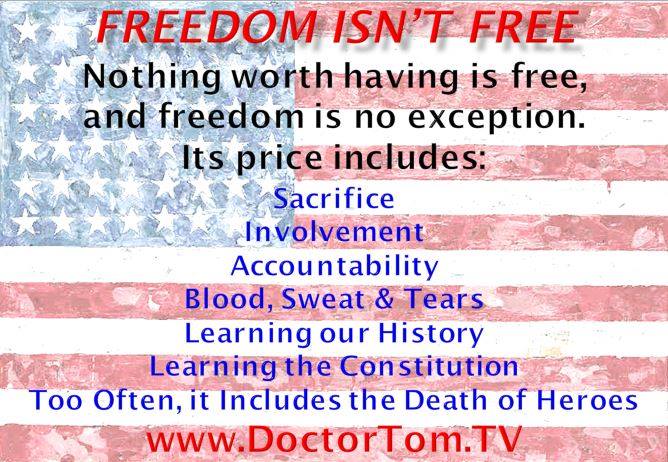 When I was much younger, I was the Florida Musical Director of the patriotic "Up With People" show. The first line of our main song was, "Freedom isn't free!" The song went on to remind us that, "You've got to pay a price, you've got to sacrifice - for your liberty."

John F. Kennedy said, “The cost of freedom is always high, but Americans have always paid it. And one path we shall never choose, and that is the path of surrender, or submission.”

Today we honor all our serving military men and women and our veterans. They have given so much so that we could enjoy the freedoms. Our Founding Fathers recognized that those freedoms come from God, not the government. But many times our military has had to fight to defend our God-given freedom. They should not be alone in their defense of freedom. Every American citizen needs to be vigilant and be ready to step up and defend our nation and our Constitution.

Unfortunately many Americans have a "Let someone else do it" attitude. We can't afford that. Every one of us needs to be involved. We face many threats, from Muslims trying to insert Shariah law into our legal system, to Socialists attempting to change our Constitution, to elected officials endangering our nation security by driving up the National Debt. And most recently our Supreme Court has violated both the Bible and the Constitution by declaring that perversion is marriage. Each of us can make a difference in these areas by having the courage to make our voices heard.

In his remarks about Independence Day, our second president, John Adams, said, "It ought to be commemorated as the day of deliverance, by solemn acts of devotion to God Almighty. It ought to be solemnized with pomp and parade, with shows, games, sports, guns, bells, bonfires, and illuminations, from one end of this continent to the other, from this time forward forever more."

I hope you have an enjoyable Independence Day, whether you celebrate by watching a parade, enjoying a picnic with your family and friends, or setting off fireworks. But I also hope that you recognize, as Adams did, that we celebrate a day of deliverance for which we owe thanks to God Almighty. Take time to thank Him for allowing you to live in the greatest nation on earth, where freedom reigns.


I watched the flag pass by one day.
It fluttered in the breeze.
A young Marine saluted it,
And then he stood at ease.

I looked at him in uniform;
So young, so tall, so proud.
With hair cut square and eyes alert,
He'd stand out in any crowd.

I thought how many men like him
Had fallen through the years.
How many died on foreign soil;
How many mothers’ tears?

How many pilots’ planes shot down?
How many died at sea?
How many foxholes were soldiers’ graves?
NO, FREEDOM ISN'T FREE!

I heard the sound of Taps one night,
When everything was still.
I listened to the bugler play,
And felt a sudden chill.

I wondered just how many times
That Taps had meant “Amen.”
When a flag had draped a coffin
Of a brother or a friend.

I thought of all the children,
Of the mothers and the wives.
Of fathers, sons and husbands,
With interrupted lives.

I thought about a graveyard
At the bottom of the sea.
Of unmarked graves in Arlington;
NO, FREEDOM ISN'T FREE!