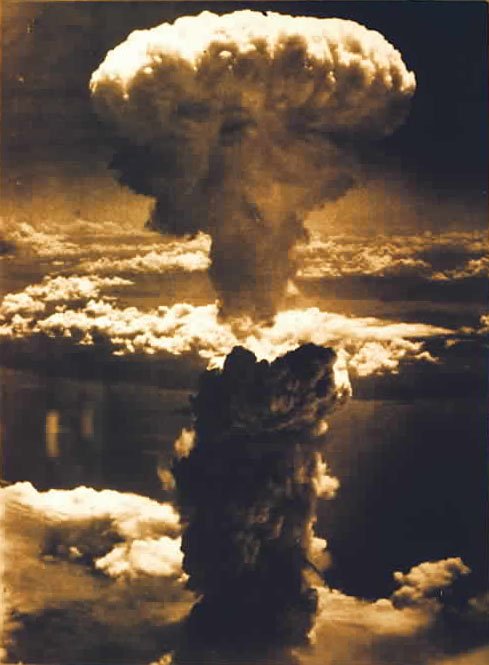 Three years before I was born, hundreds of thousands of people died in Hiroshima and Nagasaki, Japan. But the true story of the atomic bombing is seldom told. The fact that the US dropped those bombs saved the lives of millions of people – both Allied and Japanese.

The America-haters (which include most history textbook writers and many American schoolteachers) have much to say about how terrible it was for the US to bomb the “defenseless” Japanese. The same textbooks and teachers usually fail to mention that if the Japanese had not murdered over 2,500 men, women and children at Pearl Harbor, it is possible the US might not have entered the war.

This week is the 70th anniversary of the bombings. Hiroshima was bombed on August 5, 1945; Nagasaki on August 8. In Hiroshima approximately 140,000 souls perished on the day of the bombing and in the next few days. At Nagasaki approximately 70,000 died in the same time frame. Although no one will ever know for sure, it is likely that double those numbers died later from radiation poisoning and injuries sustained in these tragic events. The bombings effectively ended World War II.

Let me set the stage for you. Free Europe, including our great ally Great Britain and most democratic European nations, were the “Allies” who were fighting for their lives. They had been attacked by the “Axis” powers, including Fascist Germany and Italy, along with Japan. The Allies were later joined by British Commonwealth nations such as Canada, Australia, New Zealand and South Africa, and – strangely – the Soviet Union.

President Franklin Delano Roosevelt (FDR) was itching to join the war. Following a meeting with FDR, Winston Churchill spoke of the “...astonishing depth of Roosevelt's intense desire for war.” But, remembering the suffering and loss of World War I, the majority of Americans were pacifists to one degree or another. And although Roosevelt was a terrible president in many ways, he had the sense to know that unless the majority of the people are behind a war, a leader would have to be a fool to engage in it.

Roosevelt admitted that, “…the American people would never agree to enter the war in Europe unless they were attacked within their own borders.” On November 25, 1941, the US Secretary of War, Henry Stimson, noted in his diary: “FDR stated that we were likely to be attacked perhaps as soon as next Monday. FDR asked: 'The question was how we should maneuver them into the position of firing the first shot without too much danger to ourselves.’ In spite of the risk involved, however, in letting the Japanese fire the first shot, we realized that in order to have the full support of the American people it was desirable to make sure that the Japanese be the ones to do this so that there should remain no doubt in anyone's mind as to who were the aggressors.''

Roosevelt had already covertly entered the war without the knowledge of the American people. He had been supplying weapons, equipment and ammunition to the British. And, according to the US Secretary of War, he knew the day that the Japanese would likely attack Pearl Harbor – and he wanted it to happen so that we would be forced into the war.

History records that there were numerous indications as well as specific reports that Japan planned to bomb Pearl Harbor, and that Roosevelt’s War Department (and presumably FDR himself) was notified of them. But Washington never warned the commanders in Hawaii, leaving them as sitting ducks for the surprise attack.

Herbert Hoover, FDR’s predecessor in the White House, in his book Freedom Betrayed, wrote that “FDR's decision in 1941 to throw the U.S. into an undeclared war with Germany and Japan, in total violation of promises upon which he had been elected a few weeks before," was a huge mistake akin to “continuously putting pins in rattlesnakes until finally this country got bitten.” He also reported on FDR’s "contemptuous refusal" of the Japanese Prime Minister's peace proposals in September, 1941.

I believe it was right for America to stand with its allies against the aggression of the Axis Powers. But our entry into WWII should have been accomplished by presidential leadership instead of deceipt. It is clear that FDR provoked the Japanese into attacking us. This was unforgivable. And, if the reports are true that FDR knew that the Japanese were about to attack Pearl Harbor and allowed thousands to die to accomplish getting us into the war, he was a traitor, as well.

What is fascinating to me is that the same school textbooks that call America “evil” and “imperialistic” fail to mention Pearl Harbor at all. How can one even discuss America’s involvement in WWII without disclosing the fact that the attack by Japan without a Declaration of War thrust America into the conflict? Even the Japanese Admiral Isoroku admitted, “I fear all we have done is to awaken a sleeping giant, and fill him with a terrible resolve.

And even though hundreds of thousands of Japanese died during and following the atomic bomb attacks, how can they fail to mention that millions more Japanese would have died had the war continued?

The “Hate America First” crowd has perverted the textbooks that our children learn their history from, and has taken over our colleges and universities. It is no wonder that patriotism and love of country are foreign concepts to so many of our young people today.

In any event the two atomic bombs we dropped were the first (and hopefully the last) time nuclear weapons were used in warfare. It was a tragedy that we had to use them. So why was it necessary?

On May 8, 1945, Nazi Germany had surrendered. But Japan stubbornly refused to surrender, and they were inflicting heavy losses on American troops and ships. Of the 1.25 million battle casualties incurred by the United States in World War II, including both military personnel killed in action and wounded in action, nearly one million occurred in the twelve-month period from June 1944 to June 1945.

Japanese kamikaze bombers were a major factor in the sinking of dozens of US ships and the deaths of thousands of sailors. Kamikaze means “divine wind.” Bomber pilots were guaranteed a place in heaven for sacrificing their lives to kill Americans. In that sense, they were much like today’s Islamic suicide bombers.

A kamikaze pilot’s plane was heavily loaded with bombs. He only had fuel for a one-way trip, ensuring that he wouldn’t change his mind on the way to sink US ships. He would dive-bomb the ships, killing himself and many sailors – and often sinking the ship.

One kamikaze pilot who was never given a mission was interviewed after the war. He considered the program very “practical.” “If one man can kill a thousand troops, and one plane can sink a ship, that is efficient.” It was very difficult to defend against cold-hearted fanatics who were willing to die for their emperor, which made the kamikazes a grave threat.

Even with the benefit of hindsight we cannot say what would have happened if the US had not dropped the two atomic bombs. The war would certainly have lasted longer and likely millions more on both sides would have died. There is also the possibility (however remote) that we might have lost the war. 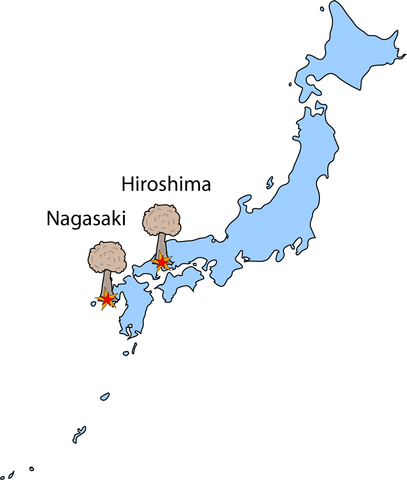 There is one thing that needs to be understood about the attacks and our nuclear capability. The nuclear bombing was one gigantic bluff. We needed the world, and particularly the Japanese, to believe that we could have kept on bombing if they had kept on fighting. The fact that the Emperor believed this lie was the main reason he surrendered. But the truth is that after the two atomic bombs were dropped in Japan, the entire US nuclear arsenal consisted of just one bomb similar to the one dropped in Nagasaki.

One other fact that surely played into the US decision to proceed with the nuclear attacks was the fact that Japan had its own nuclear weapons program. In 1941 its Nuclear Research Laboratory started with 100 researchers. By 1945 it appears that they may have been ready to test a bomb.

Historian Rainer Karlsch has found evidence that US intelligence acquired information that Japanese scientists had planned to conduct a test of a nuclear weapon on 12 August 1945 – just days after we dropped our bombs and preempted any such test. However, this could not be verified as the Russian Army occupied Konan, where the project was based a few days later, before US occupation authorities could investigate fully.

The fact that Japan had requested uranium oxide from their German allies supports Mr. Karlsch’s belief. Germany actually shipped 1,230 pounds of this material to Japan on a submarine in April, 1945. Fortunately Germany surrendered on May 7, and the material was recovered before it would have arrived in Japan.

In summary, history teaches us these things:

1)  Although FDR provoked Japan (and, according to his Secretary of War, wanted Japan to attack us) Japan had a choice. They chose a sneak attack that killed thousands of sailors, soldiers and civilians. In doing so they forced us into WWII.
2)  In the sixth and final year of the war we were in bad shape. 80% of all US casualties occurred during that year. Kamikaze bombers were taking a heavy toll. We had no way of knowing for sure that we could beat the Japanese.
3)  Our leaders were forced to make a terrible decision: Drop bombs which would kill hundreds of thousands, or risk millions more dying in a prolonged war.

In researching this article I found that there is an incredible number of very foolish people who seem to have nothing better to do than hang out in chat rooms and talk about things they know nothing about. I wasn’t looking for these comments, but came across them following articles I was reading. Dozens of times I saw comments like this: “The US should never have dropped those bombs and started a world war.”

I sometimes despair of our young people ever learning true history. Perhaps that’s why so many of my articles involve historical research and explanation. Even a cursory look at history shows that the US dropped these bombs not to start a war but to end it. But many young people will never learn this either because their teachers are as ignorant as they are, or because their Liberal professors deliberately distort the truth because they hate the United States.

Let’s pray that our young people will learn truth so that there will never be another nuclear bomb used on earth.

How Much Did FDR Know – and When Did He Know It?
http://ospreypearlharbor.com/debate/roosevelt%20.php

How the Axis Powers Could Have Won WWII
http://www.realclearhistory.com/articles/2014/02/18/how_germany_and_japan_couldve_won_160.html