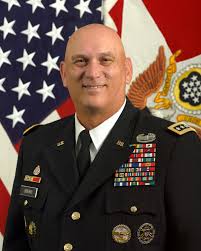 George Tenet, George W. Bush's CIA director, assured the President that this was the case. And all fifteen agencies involved in gathering intelligence for the United States agreed. The National Intelligence Estimate of 2002, where their collective views were summarized, asserted with “high confidence” that "Iraq is continuing, and in some areas expanding its chemical, biological, nuclear, and missile programs contrary to UN resolutions." And the intelligence agencies of most European nations concurred.

But remember that the invasion was not just about nuclear weapons. The UN Resolution and the Congressional Authorization authorizing the use of force referred specifically to "Weapons of Mass Destruction" (WMD's). There is no doubt in anyone's mind - even the most liberal Democrats agree - that Saddam Hussein used WMD's on Iraqi civilians - specifically chemical weapons against Kurdish civilians in the North.

In fact, apparently ISIS has now gotten their hands on some of Saddam's weapons. Numerous government officials have confirmed that the US is investigating "credible reports" that ISIS has used mustard gas weapons against Kurdish civilians.

Both US intelligence agencies and UN watchdogs have affirmed that prior to the invasion:

2)  They had an advanced biological weapons program that either had or would soon complete usable weapons with results too horrible to contemplate.

Further facts supporting the argument are...
...and the testimony of Iraqi generals. It is very clear that Iraq had nuclear weapons in addition to the other WMD’s that were discovered. He was just better at hiding them than we were at finding them.

So, who besides me believes there were weapons of mass destruction in Iraq when we invaded that miserable country? The list will surprise you:

1)  The extremely liberal New York Times, which has always hated George W. Bush and tried to portray him as a warmonger who attacked Iraq without provocation. In an October 14, 2014 article The Times finally admits that over 5,000 WMD’s were discovered in 2008. (See LINK to article below.) But it justifies its earlier lies by stating that these weren’t part of an “active” WMD program. In fact, these were weapons that Saddam claimed had never existed or had been destroyed before the invasion, and were the primary reason for the UN finally taking action.

2)  The US troops who were injured uncovering and destroying the WMD’s. Their injuries are documented in the same article. But in 2008 when the weapons were discovered, The Times was in full “Destroy Bush, Support Obama” mode and failed to report on the important news.

3)  Then Senator Hillary Clinton, in the Congressional Record, Oct. 10, 2002: “In the four years since the inspectors, intelligence reports show that Saddam Hussein has worked to rebuild his chemical and biological weapons stock, his missile delivery capability, and his nuclear program. It is clear, however, that if left unchecked, Saddam Hussein will continue to increase his capability to wage biological and chemical warfare and will keep trying to develop nuclear weapons." In a 2003 press conference she stated that she voted to authorize the invasion because “A nuclear-armed Saddam Hussein can threaten not only his neighbors, but the stability of the region and the world, and is a very serious threat to the United States."

4)  Former President Bill Clinton, in remarks to the Joint Chiefs and Pentagon Staff on February 17, 1998: “If we allow them to build arsenals of nuclear, chemical and biological weapons and the missiles to deliver them - we simply cannot allow that to happen. There is no more clear example of this threat than Saddam Hussein's Iraq.

5)  Representative Nancy Pelosi in the Congressional Record, Oct. 10, 2002: “Others have talked about this threat that is posed by Saddam Hussein. Yes, he has chemical weapons, he has biological weapons, he is trying to get nuclear weapons.”

6)  Clinton’s Secretary of State Madeline Albright said in a 1998 press conference, "Iraq is a long way from America, but what happens there matters a great deal here. For the risk that the leaders of a rogue state will use nuclear, chemical, or biological weapons against us or our allies is the greatest security threat we face."

8)  In a letter to President Bush, a group of Democrat senators led by Bob Graham, said: "There is no doubt that Saddam Hussein has invigorated his weapons programs. Reports indicate that biological, chemical, and nuclear programs continue apace and may be back to pre-Gulf war status. In addition, Saddam continues to redefine delivery systems and is doubtless using the cover of a licit missile program to develop longer-range missiles that will threaten the United States and our allies."

You can read dozens more quotes from prominent Democrats; LINKS to their statements are below. All of them voted to invade Iraq. And all of them now attempt to smear President Bush for doing exactly what they pushed for him to do. Hypocrisy is far too kind a word for these political cockroaches.

Let me close by giving you a probable explanation for the reason we weren’t able to find Saddam’s nukes. As I do, join me in prayer that ISIS won’t find and use them, as they appear to have done with his chemical weapons. 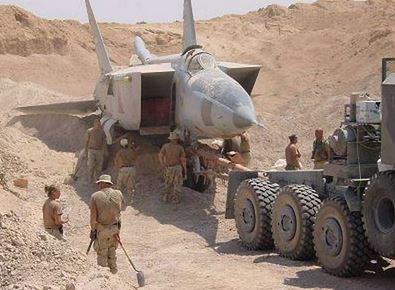 In a Washington, DC press conference on August 6, 2003, Defense Secretary Donald Rumsfeld showed this photo and three others of Iraqi fighter jets buried in the Iraqi desert. (See article LINKS below to see the other photos.) These were Mig jets that Iraq had purchased from their ally, Russia.

"We'd heard a great many things had been buried, but we had not known where they were, and we'd been operating in that immediate vicinity for weeks and weeks and weeks…12, 13 weeks, and didn't know they were there," Rumsfeld said.

The secretary said he wasn't sure how many such aircraft had been found. (Military reports later revealed that there were more than 30.) He said it's a "classic example" of the challenges the Iraqi Survey Group is facing in finding weapons of mass destruction in the country.

"Something as big as an airplane that's within a stone's throw of where you're functioning, and you don't know it's there because you don't run around digging into everything on a discovery process," Rumsfeld explained. "So until you find somebody who tells you where to look, or until nature clears some sand away and exposes something over time, we're simply not going to know.”

"But, as we all know," he added, "the absence of evidence is not evidence of absence."

He is spot on. The missing nuclear weapons are much smaller (and easier to hide) than a 44,000 pound fighter jet. One day they will probably be found. But according to the map in the New York Times article, many of the WMD’s that have already been discovered are in territory controlled by ISIS.

So, thanks to Obama’s premature evacuation from Iraq, our troops will not be the ones who discover where Saddam hid his nukes. It will probably be someone from ISIS, a group that Obama allowed to become the largest terrorist group in the world by creating a power vacuum in Iraq.

If ISIS does find and use the nukes, Obama’s children and the children of the Democrats who forced our withdrawal from Iraq will curse their parents.

Democrats Who Pushed for the Invasion of Iraq
http://www.discoverthenetworks.org/Articles/wmddemocraticbetray.html