Chris Christie says illegals only come here to get jobs. Jeb Bush says that when they break the law by illegally entering the US it's "An act of love." And besides, according to Bush, "It's not a felony." And of course Donald Trump has stated famously that they're drug dealers, murderers and rapists. They're ALL wrong!

Since 51% of illegals receive welfare, Chris Christie's view is obviously flawed. Jeb Bush is equally wrong - whether it's a felony or not, it's still a violation of our law. And, sweet as it sounds, it's not an act of love for the great majority of illegals - it's an act of selfishness. While millions of their countrymen wait in line and apply to enter the US, some shove to the front of the line and make it harder for those who follow the law to get in. And of course, Trump is wrong when he makes broad generalizations and implies that most illegals are violent criminals.

The point is that they're ALL criminals. Apologists for illegal immigrants say that they're just coming here to get jobs and to better their families' lives. Then they smile smugly and say, "After all, they're not violent criminals." But many are murderers and rapists - both in their home countries and here. And thousands have been caught smuggling drugs for the cartels when they enter.

But all of this ignores the most basic fact. Our immigration policy has always been that we do not accept people with a criminal background - for obvious reasons. So how can we allow people to stay here whose very first act upon entering this nation is to spit on our laws by entering the US illegally? If their first act on American soil is to break our laws, why should we not be concerned that many will break further laws?

I can't deal with the question of the 11 million illegals that the government admits are in the US in this short piece. (The real number is probably much higher.) But my experience as a paramedic tells me that if someone is bleeding to death, I don't worry about the blood on the ground. First I must stop the flow.

The first step we need to take is to pressure Obama to end his illegal and unconstitutional policy of "catch and release." This means that if we do catch them (which is pretty hard, since Obama has pulled so many of the border agents off the border) his policy is to release them and expect them "on their honor" to show up for a hearing. Most don't show up, of course. They just illegally entered with great effort; why would they show up for a hearing that might get them sent back?

The only way to stop the flow is to turn them around immediately and send them back across the border. Mexico will complain, "They're not all Mexicans." Our answer should be, "Even if that is true, you let them enter your country and travel though it to ours. So they're your problem."

The millions of illegals that Obama is encouraging to violate our immigration laws generally have no skills; they are often diseased; many are criminals; and the ones who don't end up living on welfare take jobs away from both Americans and legal immigrants.

One issue that seems to have been lost in the discussion is that no one really knows the percentage of illegal aliens who have criminal backgrounds in their home countries. Many have no papers, and can use any name they choose. So even if they are apprehended, their criminal backgrounds can't be determined. And even if they disclose their real names, we still have two problems: record keeping is notoriously poor in third-world nations; and some nations - particularly corrupt Mexico - may lie to us and give their criminals a clean bill of health because they don't want them in their country.

So why is Obama injuring our beautiful nation by encouraging this influx of illegals? In a word: votes. You may find this hard to believe, but he has federal employees at the border giving illegals literature - in Spanish, of course - on how to access "services" (code word for welfare) from our government. And you can be sure that the illegals figure out very quickly that it is the Democrats who are their champions. 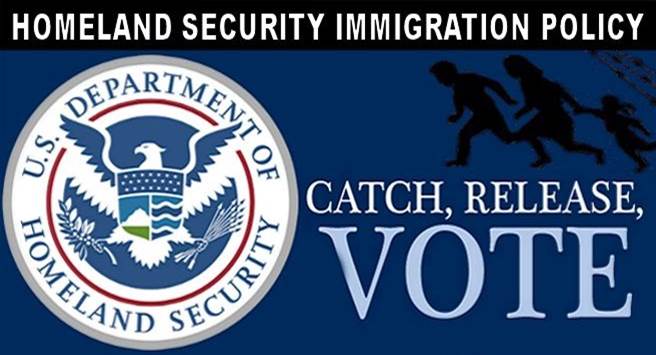 Add this to the fact the Obama administration has had its Injustice Department sue Republican states that attempt to ensure the integrity of the vote by requiring photo ID's. I guarantee you that you will not be able to enter the upcoming Democrat convention without showing a government-issued photo ID. But Obama insists on keeping one of our most sacred national institutions - the secret ballot - wide open to fraud, multiple votes - and illegals voting. Because he knows who they will vote for.

8 Times as Many Illegals Identify as Democrats as Call Themselves Republicans
http://www.pewresearch.org/fact-tank/2013/07/22/are-unauthorized-immigrants-overwhelmingly-democrats/

How Much Does Illegal Immigration Cost You?
http://amac.us/illegal-immigration-cost/