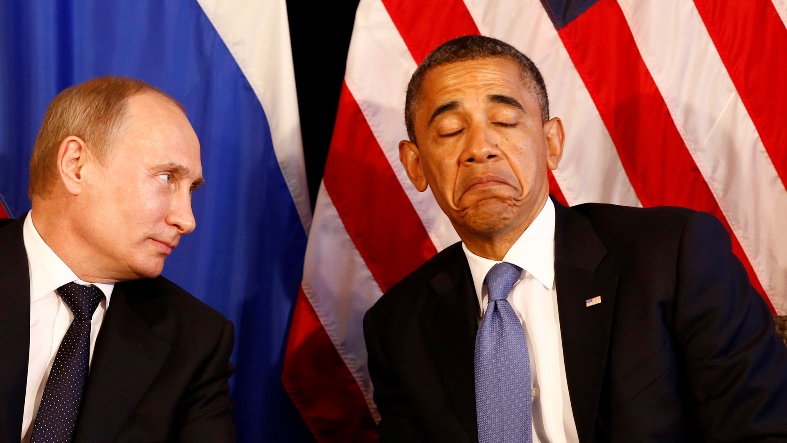 Barack Obama seems intent on reigniting the Cold War. Not by provoking Russia, but by showing cowardice in the face of Russia's aggression.

Real leaders have always understood that peace can only be achieved and maintained through strength. Ronald Reagan might have been prophesying concerning our current weak president when he said in 1983, "We maintain the peace through our strength; weakness only invites aggression."

Russia has an embassy in Washington, DC. A civilized nation would have sent its ambassador to our State Department to inform the US of its intention to initiate aggressive actions in a theater of war in which we were engaged. But no one would accuse Putin of being civilized.

Instead, Russia sent a military officer to – of all places – the US embassy in Baghdad. His message was simple: “Russia will begin bombing in Syria in one hour. Stay out of the way. For your own safety, you must suspend the US bombing campaign.” This was tantamount to an act of war.

The US response was swift and direct. Secretary of Defense Ash Carter said that the way the notice was given was “unprofessional.” Wow! I’ll bet that really hurt Putin’s feelings. We really put Russia in its place.

Next, Secretary of State John Kerry met with his Russian counterpart, Foreign Minister Sergei Lavrov, and “expressed concerns” over Russia’s militaristic actions. That must have had the Russians shaking in their boots.

After Russia had been bombing our allies in Syria for three days and his Secretaries had had their say, Obama finally spoke. He really upped the ante, calling Putin “weak.” He said that Putin had gone to war for the first time since the Cold War ended “…not out of strength but out of weakness.” Following Obama’s forceful remarks, Putin reportedly retorted, “Sticks and stones may break my bones, but names will never hurt me.” He followed this by stating, “Obama is afraid to use sticks and stones – he only has empty words.” (Or was that my statement?)

No one wants to start a war with Russia. But when various people (including Democrats) suggested mildly aggressive strategies that might upset Putin, such as no-fly zones or “humanitarian corridors” designed to protect civilians and the anti-Assad rebels. Remember these are people that we have trained and who are fighting the dictator at our behest. I response to these practical ideas Obama drew on his vast vocabulary. He called the suggestions “mumbo jumbo.”

The bottom line is that Obama is afraid of Putin. Obama is not afraid to bark. He has said some mean things about Putin. But Putin just laughs – and he bites. Claiming to have entered the war to defeat ISIS – something the world would favor – he is actually there to prop up his friend, the murderous dictator Bashar al-Assad. Almost all of the Russian bombs have been dropped on civilians and on our allies, the anti-Assad forces. The small percentage of the strikes that have been on ISIS forces were designed to bolster Putin’s claims that he is there to eliminate ISIS.

In their announcements about the successes of their air strikes, the Russian military uses the phrase “terrorist groups” and ISIS interchangeably. This is to disguise the fact that they consider the pro-democracy rebel groups to be terrorists. And labeling them as such helps Russia’s image in world public opinion.

One important fact to consider is the type and quantity of weaponry Russia has deployed to Syria, and the way they were sneaked in. The airplanes are extremely high-tech, the type that would be lethal against any air force. The problem with that is that ISIS, which Russia is supposedly there to defeat, has no air force. Ordinary bombers would have sufficed. Also, the planes were brought in in such a way that they were able to avoid detection by satellites. Again, ISIS has no satellites.

So why the huge buildup of weapons and troops, the planes that are designed to fight an air war, and the secrecy with which all of this war material was brought in? The only answer is that Russia has ambitions in the Middle East that far exceed its stated goal of helping Assad defeat ISIS. Putin plans to fill the void left by Obama in his ill-advised retreat from Iraq which gave rise to ISIS. Putin intends for Russia to become the preeminent military power and power broker in the Middle East. If that happens, Israel will be in serious trouble. 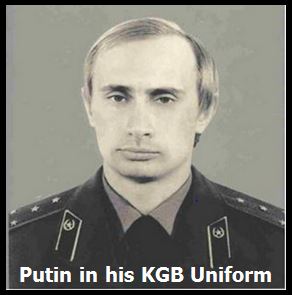 This is not the first time Obama has cowered before Putin, the KGB thug turned politician. When Russia invaded the sovereign nation of Ukraine and stole its richest area, the Crimea, Obama “used his words,” as kindergarten teachers admonish their young charges to do. He ominously threatened that there would be “consequences.”

Indeed there were. Obama’s “consequences” included denying visas and freezing the assets of 11 people – only 7 of whom were Russians. He didn’t even deny a visa to Putin, the perpetrator of the land grab. Putin laughed, and the Russian Duma mocked the US. They voted for a resolution that requested the US to sanction all the 353 members of the legislative body who voted to steal the Crimea!

The next day Putin showed his contempt of Obama’s sanctions by announcing the formal annexation of Ukraine’s territory. Obama responded by sanctioning a few more Russians – and one bank.

During this world crisis Ukrainian officials came to Washington to beg for weapons with which to defend their sovereignty. Keep in mind that they didn’t ask the US to intervene militarily – only to provide them help to defend themselves. Obama refused. He did, however, offer them military field rations. He was pretty sure Putin wouldn’t be upset by the US giving the Ukrainian soldiers food.

Of course, Russia is not our only concern. Obama has shown remarkable restraint (read “cowardice”) in his dealings with China, Iran and North Korea. Entire books could be written (and probably will be) about the inept and timid way the leader of the free world has coddled Islamists and Communists, bending over backwards to avoid anything that might be considered offensive by our enemies. But our focus today is on Putin and Russia.

Vladimir Putin made clear his ambition for world domination when he said, “The breakup of the Soviet Union was the greatest geopolitical tragedy of the 20th century.” The man is clearly a megalomaniac, determined to revive the “glory days” of Russia when it was one of the world’s two super powers.

Some would say that it was the Union of Soviet Socialist Republics, not Russia, that was the super power. But, in essence, Russia was the USSR. The “Republics” of the USSR became such either by conquest or intimidation. And most only became “Socialist” when forced to do so by the Russians. Although each “Republic” had its own ethnic leaders, they were hand-picked or approved by the Russians. Russian citizens were moved into the “Republics” by the millions to reinforce Russia’s stranglehold on their economies, culture, religion and politics. In other words, they were slave states of Russia.

Russia stole all the best from the “Republics” – energy, minerals, food, land, ports and even people. Some argue that individuals from the “Republics” rose to prominence in the Communist system. This is true. But they were people with skills or intellectual prowess that the State needed. And they cooperated either due to bribery or force. If they remained patriots of their raped nations, they were either killed or sent to prison camps in Siberia.

This is the glorious Union the demise of which Putin laments. This is the grand Union where everyone was free and prosperous – as long as they were members of the Communist Party. This is the monstrous Union that Putin seeks to revive.

Unfortunately, Obama seems willing to help Putin revive the USSR. At least he is unwilling to do anything to hinder him.

Consider that in the space of a few years – while Obama was in the White House – Putin has begun to establish regional influence over two areas – the former Soviet sphere in Eastern Europe, and the Middle East. You can be sure he won’t stop there – unless we stop him.

You can also be sure that our allies in the former Soviet “Republics” have watched Obama’s pitiful response to Russia splitting Ukraine and taking over the best part of that nation. And that they will continue to watch as Russian influence and power in the rest of Ukraine grows. They already fear Russia and they no longer trust the US to 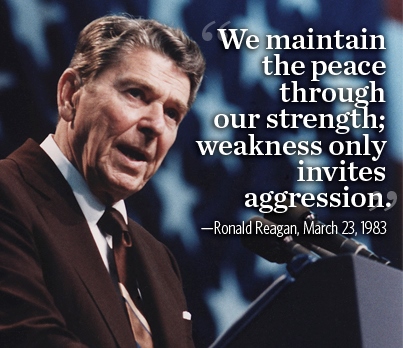 be a strong ally. But if Russia annexes what is left of Ukraine, they will lay down their arms and allow Russia to take over their nations, just as Lithua­nia, Latvia and Esto­nia did in 1940.

Some might think that Russia is a fairly new player in the Middle East. They have actually been working there quietly for years, developing relationships and supplying arms to the worst of the worst. It is only Obama’s weakness, and the power vacuum he created by disengaging the US, that has emboldened Putin to openly threaten US forces in Syria and order us to stay out of the battle there.

None of this would have happened if Ronald Reagan (or someone with his strength and courage) had been in the White House.

Russian General Tells US: 'We launch Syria air strikes in one hour. Stay out of the way'
http://www.telegraph.co.uk/news/worldnews/middleeast/syria/11902275/Russian-general-tells-US-diplomats-We-launch-Syria-air-strikes-in-one-hour.-Stay-out-of-the-way.html

Ambassador Bolton: We Could Have Predicted Putin’s Actions
http://www.politifact.com/punditfact/statements/2014/mar/06/john-bolton/did-vladimir-putin-call-breakup-ussr-greatest-geop/

Russia Admits Most of its Bombing Targets are NOT ISIS
http://www.cnn.com/2015/10/03/middleeast/syria-russia-airstrikes/