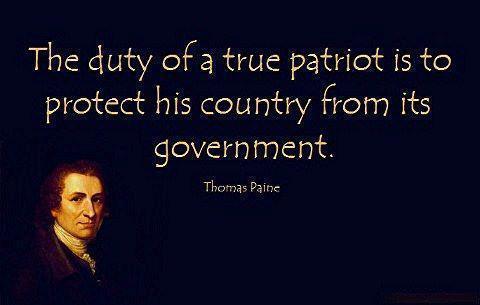 Thomas Paine was an England-born political philosopher and writer who helped shape many of the ideas that marked the American Revolution. His extremely popular article “Common Sense,” published as a pamphlet in 1776, was the first to advocate American independence. He was a true patriot.
So why did he say, "The duty of a true patriot is to protect his country from its government?" Because he knew that all governments tend to become despotic if left unchecked. Patriotism is not cheering and supporting whatever the politicians decide.
According to Paine true patriotism is listening critically to what our elected representatives say; challenging them when they are wrong; and supporting them when they are true to the Constitution. If they are chronically wrong and refuse to mend their ways, patriots should vote them out of office. And if they are too dangerous to be allowed to wreak havoc until the next election, patriots should defend their nation by taking stronger steps.
One tool in our arsenal of remedies against despotic government officials which has been used far too infrequently in the past is impeachment. There is not an elected or appointed official who is safe from impeachment - if patriots have the courage to act in defense of their country.
In my lifetime two presidents have been impeached or threatened with impeachment - and a third should have been. If the president can be impeached, why not senators and congressmen? We have too often allowed Congress to censure criminals when they should have been impeached.
And what of the many federal judges who desperately need to be impeached? It's immaterial that they have lifetime appointments. Article III, Section One of the Constitution states that federal judges are appointed to life terms while serving "during good Behaviour." Although the Constitution does not state expressly that judges can be impeached and removed, they definitely fall within the definition of "Civil Officers."
Article II, Section 4 says: “The President, Vice President and all Civil Officers of the United States, shall be removed from Office on Impeachment for, and Conviction of, Treason, Bribery, or other high Crimes and Misdemeanors." Federal judges have been impeached and removed from office, but far too few have paid for their crimes in this manner.
The sad fact is that very few Americans ever think in terms of defending the United States. As long as they have a job and food they're happy. If the rights of others are being trampled, they have no desire to get involved. It's only when their personal rights are violated that they begin thinking about these injustices. But by the time that happens, it may well be too late.
Copyright ©2015
Read more by Dr. Tom Barrett
Tweet